Saved Through the Sea - Lectionary Reflection for Pentecost 15A (Exodus) 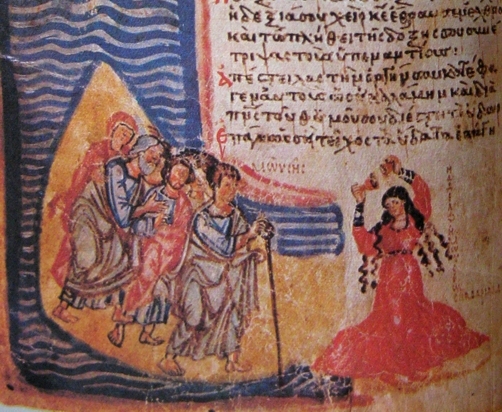 19 The angel of God who was going before the Israelite army moved and went behind them; and the pillar of cloud moved from in front of them and took its place behind them. 20 It came between the army of Egypt and the army of Israel. And the cloud was there in the midst of the darkness, and it lit up the night; one did not come near the other all night.


21 Then Moses stretched out his hand over the sea. The Lord drove the sea back by a strong east wind all night, and turned the sea into dry land; and the waters were divided. 22 The Israelites went into the sea on dry ground, the waters forming a wall for them on their right and on their left. 23 The Egyptians pursued, and went into the sea after them, all of Pharaoh’s horses, chariots, and chariot drivers. 24 At the morning watch the Lord in the pillar of fire and cloud looked down upon the Egyptian army, and threw the Egyptian army into panic. 25 He clogged their chariot wheels so that they turned with difficulty. The Egyptians said, “Let us flee from the Israelites, for the Lord is fighting for them against Egypt.”


26 Then the Lord said to Moses, “Stretch out your hand over the sea, so that the water may come back upon the Egyptians, upon their chariots and chariot drivers.” 27 So Moses stretched out his hand over the sea, and at dawn the sea returned to its normal depth. As the Egyptians fled before it, the Lord tossed the Egyptians into the sea. 28 The waters returned and covered the chariots and the chariot drivers, the entire army of Pharaoh that had followed them into the sea; not one of them remained. 29 But the Israelites walked on dry ground through the sea, the waters forming a wall for them on their right and on their left.

Let us not get caught up in debates as to whether the Israelites passed through the Red Sea or the Reed Sea or some other body of water. To get caught up in such a debate is to miss the point. The people of Israel fled those who would enslave them, and God provided a way of salvation. As with baptism, the journey through the sea is act of new creation.  It is through this journey that the people of Israel cease to be slaves. Of course, as the rest of Exodus reminds us, the mindset of slavery remained with them for a long time, which is why the two-week journey becomes a forty year one.
After the angel of death passed through Egypt, sparing Israel but not the nation of Egypt, Pharaoh finally relented and let the people go. But, it wasn’t long before Pharaoh regretted this action, and decided to pursue Israel. When the people of Israel saw the Egyptian army in pursuit, they became frightened and angry that they had been led out into the desert to die at the hands of Pharaoh’s army. It is here that deliverance/liberation takes place. God intervenes on their behalf, promising to fight for Israel. It is at this point that we pick up the text in Exodus 14.

Israel is a community of people who had been enslaved. They had no military power. They had no ability to turn aside Egypt. There was an asymmetrical relationship at hand. Israel was powerless against the onslaught of Pharaoh’s army. As Carlos Cardoza-Orlandi notes, God intervenes to “bring balance to an asymmetrical encounter.” We note the presence of the pillar of fire, which puts distance between Egypt and Israel. There is a second intervention once the Egyptians entered the sea bed after God divided the sea so Israel could pass through it. Having recognized that balance had come, Egypt decides to retreat. But it’s too late. The waters begin to close in behind Israel, drowning the army that pursued them. This action on the part of God, this destruction of a retreating army, should give us pause. It raises important questions about how we understand God, even the liberating God. On the other hand, it is this action that confirms in Israel a recognition of God’s willingness to bring balance. As Cardoza-Orlandi notes, “this is troublesome yet realistic position to take.” [Preaching God’s Transforming Justice, p. 389].

The deaths of the Egyptians is troubling. It may also represent a recognition, that Egypt would not stop its pursuit unless drastic measures were taken. So, is this a realistic assessment? Is this in a sense a reflection of God’s covenant promise to bless those who bless Israel and curse those who curse Israel (Gen.12:3). Is this the necessary action to make sure that the covenant people continue on, so that blessing can come?

As we examine the text itself, as morning broke, and the pillar of fire kept Egypt at bay, Moses followed God’s directive, raised his hand over the sea, and then the LORD sent the east wind to drive the sea back, revealing a path through the sea. With the waters divided on both sides, Israel was free to pass through on dry land. Here’s where things get sticky. Egypt pursued (the cloud no longer separated them). But while Israel passed through without difficulty, God clogged the wheels of Egypt’s chariots. Seeing this, they decided to retreat (but not necessarily giving up).

Again, some have tried to find naturalistic explanations for this event, but to do so misses the point. It is clear that God is at work here, intervening on behalf of the people. Walter Brueggemann points out another element to the story. There is a reflection here of the creation account, where God separates the waters, revealing dry land. Thus, “in this moment of liberation, God does a deed as powerful, original, and life-giving as the very newness of creation. Conversely, the Egyptians are caught in the power of the waters and the disorder—the powers of chaos, which are mobilized by Yahweh to foil the enemies of liberation” {“Exodus”, NIB, 1:794-795]. As a result, even Egypt is led to confess the power of Yahweh. Both Israel and Egypt believe. That leads us to recognition that in this story Yahweh is the primary actor. God is engaged in this effort, not from afar, but in the muck, clogging the wheels of the Egyptian chariots. This victory of God for Israel may have provided Paul the metaphor in the declaration that “in all these things we are more than conquerors through him who loved us” (Rom. 8:37 NRSV).

We are as humans enthralled by power. We’re impressed by marching troops and missiles. Facing the Empire is challenging. It may sound nonsensical that Yahweh has sufficient strength to defeat Pharaoh, but we watch as it occurs. Brueggemann points out that “the faith to which Israel is here summoned is not a faith the world easily believes and is arrived at by common sense. It is trust against the evidence, risk in the face of the odds, that life can come even in the public domain, where Yahweh governs” [NIB 796.]

It is not surprising that the Exodus narrative has become an important catalyst for liberation theologies. For peoples who find themselves marginalized and oppressed, facing the armies of empire, the only hope is to lean into God. This story thus inspires hope that God will act on their behalf. Gustavo Gutierrez, one of the most prominent figures in Latin American liberation theology, writes that “the liberation of Israel is a political action.” That is, God is acting in time and space on behalf of Israel. Then he writes: “It is the breaking away from a situation of despoliation and misery and the beginning of the construction of a just and fraternal society. It is the suppression of disorder and the creation of a new order” [Theologyof Liberation, p. 155 - pagination is 1st ed.]. Gutierrez, like Brueggemann, makes the connection between the Genesis creation story, and this act of liberation. He notes that Israel wasn’t sure about whether God was really on their side. They resisted Moses and questioned him, especially once they were backed up against the sea with Pharaoh in pursuit. Thus, “A gradual pedagogy of successes and failures would be necessary for the Jewish people to become aware of the roots of their oppression, to struggle against it, and to perceive the profound sense of the liberation to which they were called.” Passing through the sea, Israel is saved. As Gutierrez notes, “the Exodus is the long march towards the promised land in wh8ich Israel can establish a society free from misery and alienation” [Theology of Liberation, p. 156].

So it is with us, in this day and age, are we ready and willing to pass through sea and experience our liberation? Are we ready to put our trust in God, who acts on our behalf? Are there elements of the old life that need to be addressed, as we pass through the waters, and then through the wilderness. The wandering in the wilderness wasn’t a matter of bad maps. It was a necessary step to prepare the people for what comes next. To what are we being prepared for?

Picture Attribution: Crossing of the Red Sea and Miriam Dancing and Singing, from Art in the Christian Tradition, a project of the Vanderbilt Divinity Library, Nashville, TN. http://diglib.library.vanderbilt.edu/act-imagelink.pl?RC=55470 [retrieved September 12, 2017]. Original source: http://commons.wikimedia.org/wiki/File:Chludov_Miriam.jpg.