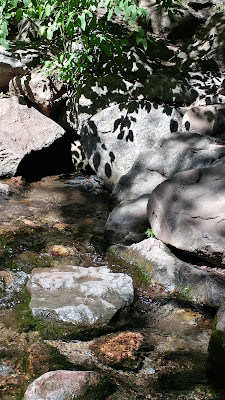 17 From the wilderness of Sin the whole congregation of the Israelites journeyed by stages, as the Lord commanded. They camped at Rephidim, but there was no water for the people to drink. 2 The people quarreled with Moses, and said, “Give us water to drink.” Moses said to them, “Why do you quarrel with me? Why do you test the Lord?” 3 But the people thirsted there for water; and the people complained against Moses and said, “Why did you bring us out of Egypt, to kill us and our children and livestock with thirst?” 4 So Moses cried out to the Lord, “What shall I do with this people? They are almost ready to stone me.” 5 The Lord said to Moses, “Go on ahead of the people, and take some of the elders of Israel with you; take in your hand the staff with which you struck the Nile, and go. 6 I will be standing there in front of you on the rock at Horeb. Strike the rock, and water will come out of it, so that the people may drink.” Moses did so, in the sight of the elders of Israel. 7 He called the place Massah and Meribah, because the Israelites quarreled and tested the Lord, saying, “Is the Lord among us or not?”

Water is a precious resource. We cannot live for long without it. Perhaps that is because our bodies are largely composed of water. Many conflicts around the globe center on access to water, and with increasing desertification, drought, and pollution, this will become even more a problem in the days and years to come. Having lived in California much of my life, I’m only to aware of the issue of drought. For a moment there is a reprieve, but for how long? Now, living in Michigan, I’m well aware of the issue of water pollution. Not far from where I live sits the city of Flint, a community that has suffered greatly due to political decisions that led to a contaminated water supply that led to deaths from Legionnaires Disease and countless cases of lead poisoning.

With this in mind, is it surprising that the Israelites were concerned about their futures, when they realized that they lacked access to potable water? Is it any surprise that they complained, much as they had earlier (last week’s reading from Exodus 16) discovered that they were sitting in a desert without access to food? Moses might not have been happy, which is why he asked why they quarreled with him, but they did have a point. On the other hand!

The journey through the wilderness is designed to build trust in Yahweh. They are still in the initial stages of a relationship with Yahweh. They’ve seen God act on their behalf, liberating them from slavery, but the future is still uncertain. They’re no longer under Pharaoh’s yoke, but wandering in a desert, where food and water are scarce can be stressful. Yes, God provided food for them, but that’s only part of the equation. They are totally dependent on God’s provision. Slavery was bad, but they knew what to expect. Water was close at hand, and food could be found. Life wasn’t good, but they did survive. Now, survival is called into question. Will God be with them, or will God abandon them? They don’t know enough yet, to make that determination. As the story continues, that anxiety will continue. Indeed, it continues to this day in our own lives.

Of course, this isn’t just about God. This is, at least on the surface, about Moses and his leadership. Moses claims to speak for God. It’s Moses who lead them out of Egypt and through the sea. It was Moses who interceded and gained them access to food. But, now there is another issue at hand. How will Moses handle it? When Moses responds to their accusations of incompetence as a leader, he accuses the people of testing God. Moses had promised them freedom. They have freedom. However, freedom isn’t quite what they had envisioned. They heard the promise of a land of plenty. They wondered how long it would take to get there.

As for Moses, he draws God into the conversation, but it’s clear that Moses is wondering what God will do as well. Moses asks God what he should do with the people, who he believes are ready to stone him. This is now serious business. He doesn’t fear getting fired. He’s fearing for his very life.

God offers, as before, a solution. It’s not a solution to Moses’ leadership problem. It’s a solution to the people’s thirst. God instructs Moses to take his staff, which he had raised up to divide the sea, and told him to strike the rock at Horeb, just as he had struck the Nile and brought upon it the plagues. Moses did as instructed, in front of the Elders, so there would be a witness to this act of redemption. I hadn’t noticed it until reading Walter Brueggemann’s commentary on the passage, but the narrator doesn’t tell us anything about what happened when Moses struck the rock, only that he did so. It would seem that the narrator supposes we, the reader, understand that all of that happened. It’s the speech, not the implementation that is important. Brueggemann writes that in the mind of the narrator there is one point to make. That point is “only Yahweh can give the resources for life, but Yahweh will do so through the work of Moses” [“Exodus,” NIB, 1:817].

While there would seem to be something to celebrate here—the provision of water that will sustain the people—the narrator simply comments on the names that Moses gives the place, names that signified both the quarrelsome nature of Israel and their willingness to test God.  At the heart of the people’s response to their situation is the ongoing question of God’s reliability. Moses gives the place these names because the people continually raise the question: “Is the Lord among us or not?” That is the question we continually ask, is it not?

The problem is raised. A solution is found. The people can continue their journey. But, as Brueggemann also notes, the passage raises questions about the tendency to view religion in utilitarian ways, where “God is judged by the desired outcomes for the asking community. Thus, the community in this story would conclude that if the Israelites lack well-being, then God is not present for them.” How might we view our own religious commitments in utilitarian fashion? To what degree might the demand for relevancy be a reduction of our faith to utilitarianism? Brueggemann goes on to suggest that the “temptation to reduce religion to utilitarian effect is the problem with which the book of Job struggles. In the end, the whirlwind speeches of Job 38-31 assert (and Job accepts in 42:1-6) that the reality of God is not commensurate with human prosperity. This text provides the ground for criticism of communities of faith that seek to ‘program’ the capacity of God to do the wonders required by the community” [NIB, 1:819].

What is it that we desire from God? What benefits do we expect to accrue? Moses named the place “Massah and Meribah,” because the people quarreled and tested God by asking whether God was present with them. Apparently, the manna, quail, and water wasn’t sufficient proof. Nonetheless, it’s clear that God is present and listening, even in the most difficult of moments, whether water pours forth from a rock or not.

The time of wilderness wandering helped to build a relationship between the people and God, but the trust building is not yet complete. The journey must continue, but a sign of presence has been established. The question for us is whether we are seeking a utilitarian God, who will provide our needs, or a God we can be in relationship for the journey into the future? The water is precious. It is available. Let us take care of it so it may be a blessing to the many.

essay writing service australia said…
People don't realize the price of wasting water and soon it will be an international issue over water conservation. Some serious guide should be given on preciousness of water.
12:09 PM