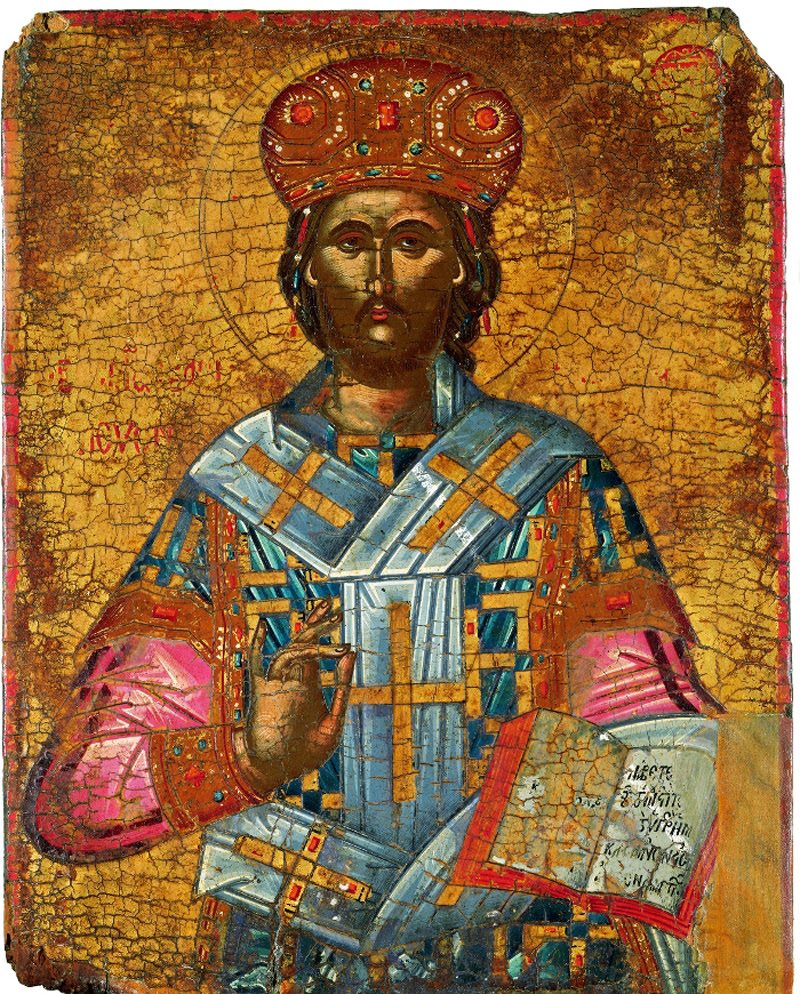 23 Now these are the last words of David:
The oracle of David, son of Jesse,
the oracle of the man whom God exalted,
the anointed of the God of Jacob,
the favorite of the Strong One of Israel:
2 The spirit of the Lord speaks through me,
his word is upon my tongue.
3 The God of Israel has spoken,
the Rock of Israel has said to me:
One who rules over people justly,
ruling in the fear of God,
4 is like the light of morning,
like the sun rising on a cloudless morning,
gleaming from the rain on the grassy land.
5 Is not my house like this with God?
For he has made with me an everlasting covenant,
ordered in all things and secure.
Will he not cause to prosper
all my help and my desire?
6 But the godless are all like thorns that are thrown away;
for they cannot be picked up with the hand;
7 to touch them one uses an iron bar
or the shaft of a spear.
And they are entirely consumed in fire on the spot.

*******************
The liturgical year ends with Christ the King or Reign of Christ Sunday. With the age of monarchy passing into history, this might seem a rather anachronistic way to end the church year. Most modern monarchs serve as ceremonial heads of state, but the real power is left to elected officials. So, is Christ a ceremonial figure? Despite the fading of monarchies, the idea of monarchy may still have some relevance to our spiritual conversations. Of course, there have been conversations about shifting metaphors to more modern possibilities, but none of them have truly caught fire as descriptors. Some have shifted to speak of the realm and reign of God rather than kingdom, but the basic concept remains the same, though the shift allows us to recognize that king and kingdom have patriarchal edges. While monarchies have become more ceremonial, contemporary western leadership positions such as president and prime minister are elective in nature. The question then becomes, in what way is Christ elected as our ruler? So, it appears for now we’re left with monarchical imagery.

With Christ the King Sunday at hand, and because we are working through the readings from the Hebrew Bible, we have before us the reading from 2 Samuel 23, which enshrines the “Last Words of David.” The lectionary has taken us on a quick jump from Hannah’s song (1 Samuel 1), in which a woman goes to the Temple at Shiloh and makes a deal with God, promising that if God redeemed her from the shame of barrenness, she would bring her son (she asked for a son) to the Temple to be raised there. Lo and behold, she has a son, whom she names Samuel, and she fulfills her side of the bargain. In the end Samuel is called by God to be prophet and judge over Israel. In that position, he anoints first Saul and then David to be kings over Israel. From that song, we jump to another. The two songs frame the rise of monarchy, the fall of Saul and the rise of David. Although there are more stories to be told of David’s exploits, these words are placed here, immediately following David’s song of Thanksgiving (2 Sam. 22).

David is envisioned in Scripture and in our imaginations as Israel’s greatest king. He was the one who united the people and set them on a proper course. Solomon’s kingdom might have been larger in area, and Solomon may have built the Temple, but it was David who set the course. It was David whom God exalted, anointed, and favorited. And as Paul declared, David is to God “a man after my heart, who will carry out all my wishes” (Acts 13:22), and thus a precursor to Jesus, the Messiah.

Of course, the story of David’s reign and that which follows is much more complex than this would suggest. David’s reign not without its scandals, and yet over time David took on a messianic mantle that was passed on to Jesus by early Christians. David’s kingdom would before long fall into realms, one of which disappeared in the eighth century BCE. The smaller portion of his realm, the one that continued under a Davidic dynasty would last until Nebuchadnezzar brought the kingdom and the monarchy to an end in the early sixth century BCE. When the exile ended in the closing third of the sixth century, the former Judean kingdom existed only as a province of the Persians and then of the Greeks. There would be a brief return to monarchy under the Hasmoneans in the second century BCE, but it would be subsumed under Roman rule before too long. By the first century of the Common Era, during the time of Jesus, a messianic fervor erupted in the former realm of David, now under Roman domination, either direct (Pilate) or through vassal kingdoms (Herod Agrippa). The early Christians came to interpret the ministry of Jesus in messianic terms, understanding Jesus to be the chosen heir of David, though the nature of his realm was reenvisioned into a spiritual realm.

In light of Christ the King Sunday, we might read these “Last Words of David” with the proclamation of Revelation 1 in mind, as this passage marks the second reading for the day.

Grace to you and peace from him who is and who was and who is to come, and from the seven spirits who are before his throne, 5 and from Jesus Christ, the faithful witness, the firstborn of the dead, and the ruler of the kings of the earth.

To him who loves us and freed us from our sins by his blood, 6 and made us to be a kingdom, priests serving his God and Father, to him be glory and dominion forever and ever. Amen. (Rev. 1:4b-6).

Considering this affirmation of Christ’s kingly rule, how might we understand David’s words as words to us?

The word we have before us come, is said to be an oracle of God, a prophetic word that is delivered through David. These last words begin with a description of David as being the one who is “exalted of God,” “anointed of God,” and the “favorite of the Strong One of Israel.” These three descriptors of David exalt him to an honored place in the heart of God. What he speaks comes from God and might be understood to be his testament, his words of guidance to those who would follow him. Consider that David, as God’s oracle, speaks of the covenant God has made with the house of David, a covenant that is everlasting. If heard in the light of the exile or its aftermath, it’s not surprising that there would be those who would claim this mantle and seek to restore Israel to its former glory. After all, hasn’t God pledged loyalty to the covenant?

So, here is the message of God revealed to us through David:

One who rules over people justly,
ruling in the fear of God,
is like the light of morning,
like the sun rising on a cloudless morning,
gleaming from the rain on the grassy land. (2Sam. 23:3-4).

If a just ruler brings blessing, then the godless, the one who fails to abide by the covenant, is like a thorn that must be thrown away. The contrast is stark. The thorn must be removed, but removal is not easy. You can’t just pick them out by hand. You must use an iron bar or spear shaft, and then when removed they must be consumed by fire “on the spot.” Why? I would assume that if they are not, they might take root once again.

There is in these words of David an affirmation of covenant but also of judgment. We bring the liturgical year to a close with difficult words. Then, when we regather on the first Sunday of Advent, and light those candles, we prepare to receive a different kind of king. Yet, these words do seem to speak of the need for judgment, of refining, as a pathway to justice. There is here a word of promise and a word of warning to take with us, as we move toward a new season with Christ the King.