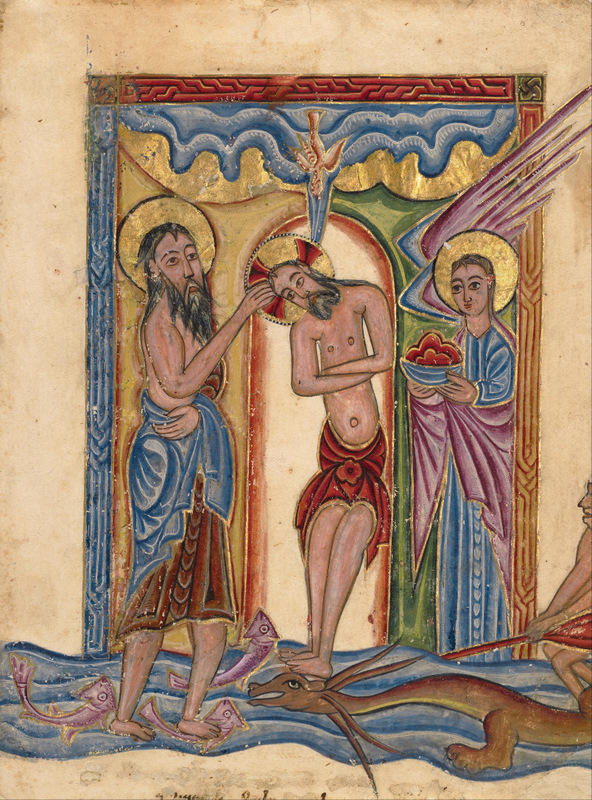 
Last Sunday we celebrated Epiphany by joining the magi in giving homage to the one who is the light of the world. Today we celebrate another epiphany by remembering the baptism of Jesus.  After John baptized him, the Holy Spirit descended on him like a dove, and Jesus heard God declare from the heavens:  “You are my Son, the Beloved, with you I am well pleased.”(Luke 3:21-22).

Since this is Baptism of Jesus Sunday, we have the opportunity to reaffirm our own baptisms and hear God say of us: “You are my beloved child.”  With this reaffirmation, we’re reminded that we not only have been baptized in water, we have been baptized with the Holy Spirit.

This morning we heard a small portion of the story in Acts 8 of Philip’s mission to the Samaritans. In this brief passage we hear about a visit by Peter and John to Samaria. When they discover that these Samaritan believers have been “baptized in the name of Jesus,” but haven’t received the gift of the Holy Spirit they lay hands on the Samaritans imparting to them the gift of the Holy Spirit.

This reading really needs to be set in context, which leads us back to the first chapter of the Book of Acts, where Jesus gave that earliest community a commission. He told them that they would receive the power of the Holy Spirit, and then they would “be my witnesses in Jerusalem, in all Judea and Samaria, and to the ends of the earth” (Acts 1:8). That work of the Spirit began at Pentecost, but it was mostly focused on Jerusalem. There is a lot that happens between Pentecost and Philip’s ministry in Samaria. For one thing, the apostles appointed seven spirit-filled leaders to assist them in the work of the church. Among these seven was Stephen, the first martyr, and Philip, who left Jerusalem after Stephen’s death and landed in Samaria, where he began to preach. That’s where we find ourselves today.

It took a persecution to nudge the church out of Jerusalem and onto the next step of the journey, but the Spirit was with Philip and many Samaritans followed Jesus and were baptized. That leads us to this visit by Peter and John, who lay hands on the Samaritans so they might receive the Holy Spirit.

Now, there’s a lot more to this story than what I just shared. For one thing, there’s a Samaritan who was well known in his community for his magical abilities. People called him “Simon the Great,” but even Simon was impressed by Philip. He was even more impressed by Peter and John. While he was baptized in the name of Jesus, he quickly fell back into old habits by offering Peter and John money so he too could impart the Spirit to others.  Unfortunately for Simon, the two Apostles sternly rebuked him. Peter told him to repent of his wickedness and pray for forgiveness. While it appears that Simon repented, his request has lived on in infamy. So, if you know the word “simony,” you know Simon!

With the context set, I come to the question of the hour:  Why didn’t the Spirit come upon these new disciples when they were baptized? Didn’t Peter say on the Day of Pentecost that if you are baptized you receive forgiveness and the gift of the Holy Spirit? (Acts 2:38). Our Disciple founders believed that this was the normative pattern for salvation. Remember Walter Scott’s “Five-Fingered Exercise?” First believe, then repent, after which you’re baptized. After these three requirements are fulfilled, then you receive forgiveness of sins and the gift of the Holy Spirit. You would think that this would be the normative pattern, but in this case it took a visit from Peter and John to complete the work. So, had Philip acted without proper authority? Is apostolic action required to impart the Holy Spirit? If that’s true, then baptism serves to wash away sins, but it will take the laying on of hands to bestow the Spirit.

While that’s one way of reading this story, I prefer the interpretation that focuses on the relationship of Jews and Samaritans. Although these two communities had a common ancestry, and claimed Moses as their spiritual ancestor, they had developed rather different versions of this faith. Not only did they have different religious practices, they despised each other. Each group thought the other was religiously deficient and ethnically impure.  This is why the parable of the Good Samaritan is so powerful. Jesus made the hero of the story a person whom the hearers of the parable would have despised. Now this despised group of people has embraced Jesus and has been baptized. The question is, will the larger group of Christians welcome them into the family?

I think the Holy Spirit delayed the gifting until the Jerusalem church was ready to embrace these new brothers and sisters.  It’s not that Philip’s work was deficient.  It’s that the Jerusalem church needed to affirm the work of the Spirit in Samaria. If you read on in Acts 8, you will find Philip preaching to the Ethiopian eunuch. When the Ethiopian asked to be baptized, Philip agrees, and I’m assuming that the Spirit came upon this new member of the community without the Apostles laying hands on him. So, at least for a moment, we returned to the normal pattern.  That is, until we run into another “exception to the rule” in Acts 10. That is the story of Peter’s visit to the house of the Gentile Cornelius. This time the Holy Spirit fell on Cornelius’ household even before Peter was finished preaching. Since Peter wasn’t going to argue with Holy Spirit, he  baptized everyone in the household.

Getting back to this work of the Spirit in Samaria, in my mind, this is just one example of the way the Spirit of God breaks down barriers that divide people.  This is a good thing, because we humans are very adept at erecting barriers. We even erect them in the church. They might be economic, social, ethnic, or gender related. More often than not it takes an act of the Spirit to break down the walls we erect. That’s because too often we inherit these barriers without even realizing they are there.

A good example of this is the continuing presence of racism in our culture, and with the culture, the church. Talking about racism and its possible presence in our lives can be uncomfortable, which is why it took an act of the Holy Spirit to open the way for the Jerusalem church to accept the Samaritans and then the Gentiles into the Christian community.

When it comes to discussing racism, very few of us see our selves as racists. That’s because we usually think of racists as people like Dylan Roof who shot up a bible study group at a black church. That’s not me. But sometimes we have to broaden our definitions to see things as they are. Consider with me the words “white privilege.” We may not feel all that privileged, but if we listen to stories told by nonwhite people, we discover that their experiences in our culture are very different from those experienced by people like me. Think for a moment about the way we hear the story of Columbus. I grew up, as most of us did, learning about the “Age of Discovery.” As far as I knew, there was nothing wrong with these voyages to new lands, but I learned this as a person of European descent. But, what if I was a Native American? How might I hear this story? What if I’m an African American, and I’ve learned the story of the founding of the American nation, with its promise of freedom and equality for all, knowing that my ancestors were brought to this continent to be sold as slaves? Then I might have a different sense of history. That’s not to mention Jim Crow and the mass incarceration of young African American males today. There are many parts to this story that are unfamiliar to me, unless I’m willing to listen and receive. I believe that this takes an act of the Holy Spirit.

This year Disciples celebrate the fiftieth anniversary of the merger of the National Christian Missionary Convention, with the United Christian Mission Society and the International Convention of the Christian Churches (Disciples of Christ) to form the Christian Church (Disciples of Christ). While this is worth celebrating, the very fact that a merger took place is a reminder that for much of our existence as a faith community, Black and White Disciples lived, worked, and worshiped separately. While we became one church, we’re still living into this reality. That’s because racism is still present in our society.

Getting back to Samaria, we see the Holy Spirit opening the way for the creation of an inclusive church. We’ve not always fulfilled the promise of this effort in Samaria, or the one at Caesarea, but the Spirit continues to be at work in our midst, forging unity where division has existed.

As we remember the baptism of Jesus and reaffirm our own baptisms this morning, with the story of Philip’s mission in our hearts and minds, may we embrace this call to enter more inclusive forms of relationship. This calling begins with baptism, both in water and in Spirit, and extends to the Lord’s Table, where the Spirit of the Lord is waiting for us so we can continue the journey toward wholeness in our fragmented world.