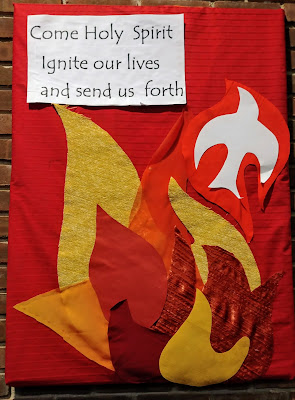 
Spirituality is in vogue. Religion is not. Growing numbers of people call themselves “spiritual but not religious.” They desire spiritual things, just not the institutional baggage that comes with religion. But what does it mean to be spiritual? That question forms the heart of Paul’s first letter to the Corinthian Church.

Our Wednesday Afternoon Bible Study is working through 1 Corinthians, and from what we’ve seen so far, you might say Paul is a bit frustrated with this congregation he had planted a few years earlier. He’d been away for a couple of years and in his absence things had gone awry. Reports were coming in from all quarters of the congregation about quarrels and all kinds of misbehavior. So Paul wrote this letter to put things right. Standing at the center of the problems faced by the congregation was a misunderstanding of what it means to be spiritual.

While this congregation may not have lacked in spiritual gifts (1 Corinthians 1:7), in Paul’s mind its members lacked spiritual maturity. They eagerly pursued spiritual things, but they weren’t growing in spiritual maturity. Paul pointed to their factions as a sign of this spiritual immaturity. He pointed to groups who were claiming Paul as their patron, while others claimed Apollos, the pastor who followed him in Corinth. Still others claimed Cephas, that is, Peter, as their patron. Finally, some claimed to follow Christ alone. I’m assuming this last group thought they were above factionalism, but in reality they were just as complicit as the others in the divisions wreaking havoc on the congregation. Paul responded to these reports by telling the congregation he couldn’t speak to them as spiritual people, but only as infants. Instead of giving them solid food, he would have to continue giving them milk. In other words, it was time to get back to basics (1 Cor. 3:1-4).

The word we’ve heard this morning comes to us from chapter 12 of 1 Corinthians. Although he had already reminded them that they didn’t lack any spiritual gift, it appears they were neglecting spiritual gifts while they pursued spiritual experiences. Since Paul is getting back to basics, in chapters 12 to 14 of this letter, Paul redirects their attention from the pursuit of “spiritual things” to receiving “spiritual gifts” that serve the common good.

Chapter 12 opens with the words “now concerning.” Back when I was in seminary, I learned that whenever you see these two words in 1 Corinthians, you’ll  know Paul is answering a question posed by some group in Corinth. You’ll find this formula in three other places, but in this case Paul writes:  “Now concerning spiritual things.” This reading is different from the NRSV, which reads: “Now concerning spiritual gifts.” That translation does make sense of the context, since Paul is about to write about spiritual gifts, but that’s not the question the Corinthians asked. They wanted to know about the pneumatikon, which is best translated as “spiritual things.” While the Corinthians were asking about the pneumatikon,  Paul wanted to talk about the charismata, the gifts of grace.

Now you might be wondering, “what’s the difference?” Here’s the difference: When the Corinthians asked about the pneumatikon, they seemed focused on things that benefited themselves. They were looking for spiritual experiences that would enhance their reputation in the church and in the broader society.  You might call this—seeking a spiritual high, with the added benefit of increased social standing. Instead of these spiritual things they were seeking, Paul directed their attention to the charisms, or gifts, which lead to service of others. While we may receive spiritual benefits from using our gifts, this isn’t their primary purpose. Here is what I wrote in my book on spiritual gifts: “As we make use of spiritual gifts we find that our hearts are turned to the other. In seeking to encourage the other, we find wholeness for ourselves” [Unfettered Spirit, p. 47]. I believed that then, and believe it today.

When it comes to experiencing the presence of God’s Spirit, Paul reminds us that spiritual experiences need to be rooted in the confession “Jesus is Lord.” That’s because no one can say “Jesus is Lord” except by the Holy Spirit. This is the foundation that Paul laid when he planted the congregation in Corinth, and he was calling them back to this foundation. Paul closed chapter 3 of this letter by reminding the Corinthians that they “belong to Christ and Christ belongs to God.” So, if we say “Jesus is Lord,” then we’re affirming that we belong to Christ, which means we belong to God. This is the starting point for understanding what it means to be spiritual.

When it comes to gifts of the Spirit, Paul offers several lists, one of which is found in verses 8 through 10. This list isn’t exhaustive, but it offers some possibilities. From the looks of things, these might include some of the gifts coveted by the congregation, with a special emphasis on speaking in tongues. You will find another list later in chapter 12, and still other lists in Romans and Ephesians. While these lists are helpful, the point isn’t the list but the purpose of these gifts of God’s Spirit.

We’ll talk more next Sunday about the relationship of spiritual gifts to the life of the church, which Paul calls the body of Christ, but he gives a hint about what that means in verses 4 through 6: He writes:  “there are varieties of gifts, but the same Spirit; and there are varieties of services, but the same Lord; and there are varieties of activities, but it is the same God who activates all of them in everyone.” We are all different, and yet Paul insists God would have us live in unity. We may have different gifts and different callings, but we’re bound together by the Spirit, in Christ, so we might live faithfully in the presence of God.

“Now concerning spiritual things,” Paul doesn’t want us to be ignorant. While he’ll admit to having spiritual experiences (1 Cor. 14:18), he emphasizes the gifts that lead to the common good. He wants us to know that every gift of the Spirit is intended to be used in the building up of the body of Christ. Every gift is equally important. Some gifts and callings will be more visible, but there isn’t a spiritual hierarchy in the body of Christ.

There are a variety of gifts, but there is but one Spirit. The church of Jesus Christ is diverse in its gifts and callings, but according to Paul God would have us live together in unity. This begins by moving from spiritual things to spiritual gifts, which then leads to spiritual maturity.

Finding unity in diversity isn’t easy, especially when there are so many “spiritual options” available to us. Most of the members of the church in Corinth came out of polytheistic religious backgrounds. We know this because Corinth was filled with temples dedicated to various deities. Each had its own appeal. Some traditions attracted the wealthy. Other traditions attracted members of the military. Still others spoke to the concerns of the common laborer. In other words, religious life in Corinth was often socially segregated and stratified. Unfortunately, many of these social divisions were brought into the church, and were being expressed through individualistic spiritual pursuits. While our context is somewhat different, the same elements of societal division do infect our churches.

As Disciples we affirm both diversity and unity in the church. The question is, how do we find true unity in diversity? In other words, how do we as the diverse people of God pursue the common good?

As we ponder these questions, we return to the opening question posed to Paul. What about the pneumatikon?  His answer was simple: to each has been given “a manifestation of the Spirit” as the Spirit chooses. Or, in the words found in the Ephesian letter, these gifts, these charisms, are given to the church so we might “come to the unity of the faith and of the knowledge of the Son of God, to maturity, to the measure of the full stature of Christ” (Eph. 4:13).