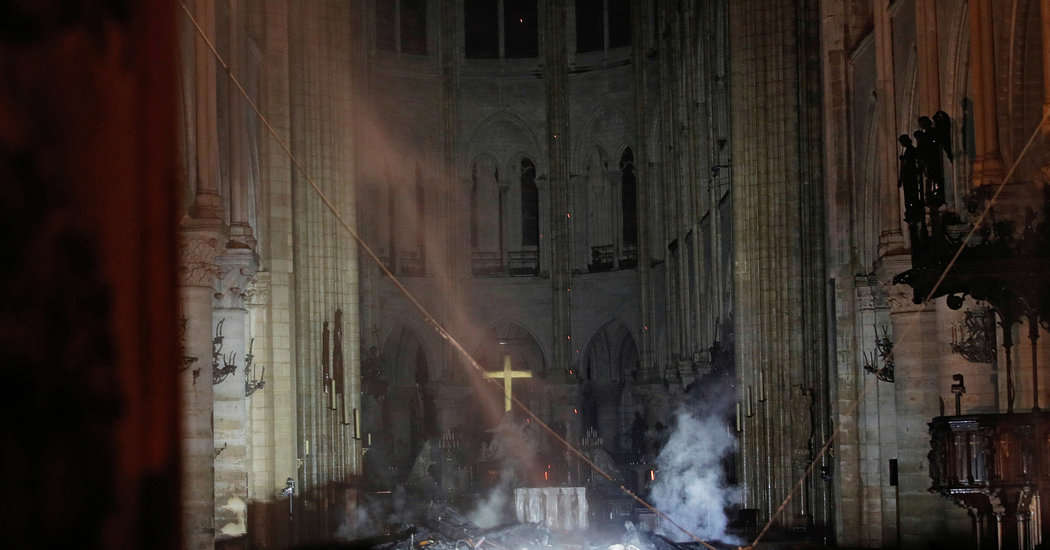 The picture above, taken by Philippe Wojazer, is powerfully symbolic. Though fire threatened to destroy this iconic cathedral, it has survived, and standing in the midst of the ruin is the altar cross gleaming powerfully through the smoke. This photo has become viral, and its understandable.

I've not been to Paris. and therefore, I've not been to Notre Dame. To this point Notre Dame is not a sacred space that has spoken to me, except from afar through photos. Nevertheless, I understand the power of sacred space from being in other sites. During my 2013 trip to England I was able to take in such sacred spaces as Salisbury Cathedral, Bath Abbey, Westminster Abbey, St. Paul's London, and though much smaller Christ Church Cathedral in Oxford. At least in Christian contexts nothing in the United States is nearly as ancient as these sites, but we do have sacred spaces that speak to us. They might be our own places of worship. Still, Notre Dame has been standing at the center of Paris for the past 850 years, bearing witness to the sacred, and to see it threatened with destruction is heart-rending.

It is interesting to watch reports of the people of Paris, a very secular city, weeping at the destruction of this ancient building. I heard reports that people were gathering to pray the rosary or sing Ave Maria (again in a highly secular city where few go to church). Why is this? Perhaps we're not as secular as we think. Perhaps there is within us a sense of the transcendent that speaks to us, and tragic events catch our eye and our heart.

That leads me to the question of sacred space. It is often said that buildings don't matter. What matters, when it comes to church, is the people. The true church, the body of Christ, is not a building, it is a people. Yet, buildings and structures play important roles in our spiritual journeys. It needn't be an ancient cathedral built of stone. It might be a log church in Kentucky (Cane Ridge). In either case, there is something about the space that speaks to us. It is a reminder that there is a connection between the material and the spiritual. Early Christians considered Gnosticism and rejected it.  When these sites are threatened, whether by an accidentally set fire, by an arsonist setting fire to a black church, or vandals attacking a synagogue or temple, we take notice---or at least we should..

As we proceed through Holy Week (and we are now at Holy Wednesday), we will consider the connection between the material and the spiritual. Many of us will gather Thursday evening to share in a service of communion, eating bread and drinking of the cup (even if only in small quantities) in remembrance of a meal shared long ago. We will gather on Friday to witness the crucifixion of Jesus and reflect on human suffering -- as Jurgen Moltmann would have us think, reflecting on the death of the Crucified God. Then we will gather on Sunday to celebrate resurrection. There is a reason why I find the bodily resurrection important. It bears witness to the physicality of our spirituality. Jesus' resurrection was not simply a dream sequence. He is the risen savior.

That brings me back to Notre Dame and its fire. It is damaged but not destroyed. The gleaming cross in the smoke serving as a reminder of the resilience of the faith. Is that not part of the message of Holy Week?
Email Post
Labels: Cathedrals Embodiment Fires Holy Week Resurrection Sacred sites Sacred Space Spirituality