A New Creation - A Sermon for Easter Sunday (Isaiah 65) 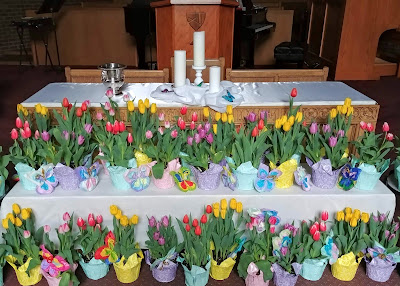 Death had its say on Friday, but this morning we gather to celebrate the good news that life reigns victorious in the resurrection of Jesus. Therefore, death has lost its sting.

We’ve already heard the Word of the Lord from the Book of Isaiah. The prophet speaks to people who have returned from exile, to find that things at home aren’t going as well as they had hoped. It’s in the midst of grief, that the people receive word that God “is about to create new heavens and a new earth.”  Because God is getting busy with acts of creation, the people needn’t remember former things, like the exile. Instead, they can “be glad and rejoice forever in what I am creating.”

Like the returning exiles, the followers of Jesus had reason to grieve on that first Easter morning. They assumed that their teacher and leader lay dead in a tomb, having been executed by the governing authorities just a few days earlier. They spent Saturday reflecting on hopes and dreams that had been dashed by the death of Jesus. Into this sense of hopelessness, came word that death had given way to life. This would be a day of new beginnings, a day of new creation. Therefore, we can “be glad and rejoice forever in what [God is] creating” through the risen Christ, whom Paul declares to be the first fruit of our resurrection.

Having heard Isaiah’s vision of the new creation, let us hear the story of resurrection as told in the Gospel of Luke, using the translation of J.B. Phillips.

1-7 But at the first signs of dawn on the first day of the week, they went to the tomb, taking with them the aromatic spices they had prepared. They discovered that the stone had been rolled away from the tomb, but on going inside, the body of the Lord Jesus was not to be found. While they were still puzzling over this, two men suddenly stood at their elbow, dressed in dazzling light. The women were terribly frightened, and turned their eyes away and looked at the ground. But the two men spoke to them, “Why do you look for the living among the dead? He is not here: he has risen! Remember what he said to you, while he was still in Galilee—that the Son of Man must be betrayed into the hands of sinful men, and must be crucified, and must rise again on the third day.”

8-9 Then they did remember what he had said, and they turned their backs on the tomb and went and told all this to the eleven and the others who were with them.

10-12 It was Mary of Magdala, Joanna, the mother of James, and their companions who made this report to the apostles. But it struck them as sheer imagination, and they did not believe the women. Only Peter got up and ran to the tomb. He stooped down and saw the linen clothes lying there all by themselves, and he went home wondering at what had happened. [Luke 24:1-12, JB Phillips].

The women were puzzled. The disciples didn’t believe their ears. Peter went to the tomb to see for himself, and emerged from it wondering what had happened. It’s been two thousand years, give or take a few, and we’re still puzzled. We may still struggle to believe our ears. We may be left wondering what happened that morning when the tomb was found to be empty. As we reflect on the story of Easter morning, what does the proclamation that Jesus is risen mean to us this morning? 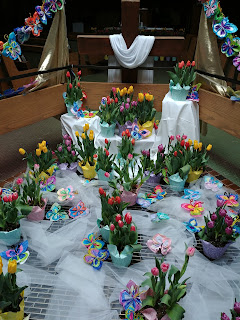 You can’t help but notice that the sanctuary is filled with color. The somber tones of Lent have given way to a rainbow of colors inviting us to break out in songs of praise and thanksgiving. The room is colorful and the songs are joyous, but this isn’t the source of our joy. It is the resurrection itself that calls forth songs of praise.

The resurrection of Jesus wasn’t a singular event.  It was the beginning of the age of new creation, like the one envisioned by Isaiah. The question is, do we see signs of that new creation?

While it might not seem directly connected to what we’re doing this morning, the news this past Monday that one of the world’s most beloved sacred buildings had caught fire caused people across the globe to stop for a moment and consider the possibility that there is more to reality than meets the eye. While the flames shot high, wreaking destruction in its path, leaving us wondering whether it would survive, there are signs that it will rise again. That there is hope of a new creation, was revealed in a picture that went viral as the fire dissipated. The picture focused on the altar cross gleaming through the smoke of the damaged chancel. That picture spoke to me of the resiliency of faith. It seemed to speak of resurrection in terms of Isaiah’s vision of new creation.

While Luke tells us the old, old story of the resurrection, a story that has been with many of us for as long as we can remember, Isaiah’s vision takes us both back to the beginning of creation and then beyond the day of resurrection. The vision we see in Isaiah 65, with its proclamation of God’s new creation, takes us back to the Garden of Genesis 2. This vision is one of exile and then return to paradise. It is a vision of peace, justice, and restoration that has begun to take shape, but is not yet completed.  The image of Notre Dame might be worth considering here. The destruction took place over a matter of hours, but like the original construction of the cathedral, the restoration of the cathedral will take time. So it is with our world.

Jesus was raised from the dead as the first fruits of a resurrection that is yet to come for the rest of creation. Cathy Caldwell Hoop puts it this way: “The Isaiah passage is an opportunity to invite the worshipers to look back in time, back into the long arc of God’s mercy, while also gazing into the ‘not yet’ of creation’s fulfillment. God is not finished designing, restoring, and remaking our world.” [Connections: 2 (Kindle Locations 5728-5730)]. The good news is that the resurrection is a sign that this work of new creation is underway.

If, as we suppose, Isaiah’s vision spoke to Jews returning from exile to find Jerusalem in ruins, then we can understand their grief and sense of hopelessness. You can understand why they might weep. We find ourselves weeping at challenges both close to home and across the globe. We wonder, is there hope for the future? That is the situation Jesus’ followers found themselves in that first Easter morning. They had been traumatized and were living in shock. The prophet and the two men, who greeted the women at the tomb, invite us to look deeper for signs that God is at work creating anew. Sometimes you have to look carefully. It’s a bit like this spring. There are signs that spring is near at hand, even if we haven’t yet seen its full expression. For the people of Judah, spring was at hand. The same was true for the followers of Jesus. Look carefully, and you will see the hand of God at work, but be patient, as this new creation takes time to unfold.

Walter Brueggemann speaks to our concerns in reflecting on Isaiah 65:

The news is that God has not quit or been defeated. In the very depth of misery, the power and fidelity of God persist. Both the new city of Isaiah and the risen Christ of the evangelists attest that God is not a prisoner or victim of circumstance. God is free and faithful beyond every disability of death, chaos, or injustice. [Connections: 2 (Kindle Locations 5711-5713)].

Yes, the word we hear this morning is that “God has not quit or been defeated.”  That doesn’t mean everything around us is perfect, but it does mean God is at work in our midst.

In Isaiah’s vision of the new creation or return to the garden, there will be no more weeping or cries of distress. Life will be long and enjoyable. Houses will be built and inhabited by the people who built them. Vineyards will be planted and the people will enjoy its produce. No longer will they need to worry about being replaced by invaders. In that time the wolf and the lamb will feed together. It is a vision of peace, where no one will be hurt or destroyed on God’s holy mountain. Isaiah invites us to enter into this new creation. He also invites us to participate with God in bringing into fruition this vision of a new creation. The question is: How will we respond to this invitation?

With this invitation in mind, we can join in song using the ancient words of John of Damascus:

Now let the heavens be joyful! Let earth its song begin!
The world resound in triumph, and all that is therein;
let all things seen and unseen their notes of gladness blend;
for Christ the Lord has risen, our joy that has no end.
— “The Day of Resurrection,” Chalice Hymnal 228, vs. 3