DISCERNING THE SPIRIT(S): A Pentecostal-Charismatic Contribution to Christian Theology of Religions. By Amos Yong. Eugene, OR: Wipf & Stock, 2019. 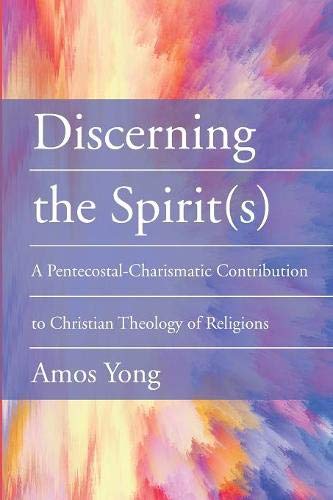 Ecumenical conversations among Christians are not easy, but even if the participants in the conversation don’t share the exact same Christology, they can at least agree that Jesus belongs in the conversation. The same cannot be said for interfaith conversations, where Jesus is often a stumbling block. If we start with Christology, then the conversation often ends quickly. Jews aren't sure what to make of Jesus, but the history of Christian-Jewish relations down through the centuries doesn’t make for an easy conversation. Muslims affirm Jesus as one of the great prophets, even affirming the virgin birth, but they reject the idea that he is the Son of God, is divine, or even crucified. Hindus and Buddhists may have ways of incorporating Jesus, but probably not in the same way Christians would. So, is there another approach available to us that can help us find a bridge to the conversation? Amos Yong, who is a Pentecostal-Charismatic theologian, suggests we might pursue a pneumatological approach to the question. With that in mind, he explores the possibilities for such an approach in this book.

Amos Yong is currently a professor of Theology and Mission, as well as Dean of the combined School of Theology and School of Intercultural Studies at Fuller Theological Seminary (my alma mater). Discerning the Spirits is a reprinting of Yong's Ph.D. dissertation (it was originally published in 2000 by Sheffield Academic Press. Though he has had changes in his approach to the question of interfaith conversations, this book serves as the foundation of Yong's later work, which includes two that focus on interfaith conversations: Beyond the Impasse: Toward a Pneumatological Theology of Religions and Hospitality and the Other: Pentecost, Christian Practices, and the Neighbor. Yong’s own experiences as one born in Malaysia to parents who converted from Buddhism to Christianity (his father became a Pentecostal minister), before moving to the United States. That dual heritage has given him a unique perspective. While Pentecostals and Charismatics are not known for their engagement in interfaith conversations, Yong offers an important voice from within the tradition that is worth listening to.

Because this book began its life as a dissertation, it carries all the marks of an academic publication. Nevertheless, even if Yong might not affirm every part of the book today, it is an important scholarly contribution to our conversations about mission and interfaith dialog. The focus of his attention is the problem of the Christological impasse and the potential that pneumatology has for creating a bridge to further conversation. This doesn't mean that Christology isn't important to the conversation, but Yong believes it needs to be brought into the conversation a bit later. While he roots this approach in his Pentecostal-Charismatic commitments, he insists (and I agree) this is not just written for Pentecostals. It is instead a Pentecostal contribution to a larger conversation.

Yong admits this book, which was written two decades earlier, is preliminary, but it is also the foundation for what was to come. His thesis, in essence, responds to Harvey Cox's book Fire From Heaven: The Rise Of Pentecostal Spirituality And The Reshaping Of Religion in the 21st Century. His thesis is this: "I believe that the Pentecostal and charismatic experience of the Holy Spirit can provide an avenue by which a pneumatological approach to the non-Christian faiths can be constructed which will complement, and in some ways, perhaps advance the discussion of a Christian theology of religions." (p. 20).  He notes the categories Cox uses to explain the Pentecostal-Charismatic Movement as it engages the world, and then seeks to nuance them. In the end, he attempts here to formulate a Pentecostal theology of religions.

Since this is a dissertation it contains the typical materials included in such a work, such as a literature review and methodological foundations. In other words, this isn't easy reading. It requires one to walk through philosophical territory one might not be used to traversing. Once you get through the initial academic portion, you come to his discussion of the Christological impasse, where he discusses how Christology has been deployed, and how it presents problems. Then, in chapter 3, he lays out the foundations of his pneumatological approach. He notes that the primary issue that needs to be addressed in this approach is one of discernment. How do you know if the Spirit is present in another faith tradition or experience? This is often where Christology comes in, but perhaps not at the very beginning of the conversation. Then in Chapter four, he dives deeper into the question of discernment, making use of a comparative symbology.

Finally, in chapter five, after he has laid out the methodological foundations and questions, he begins to construct a Pentecostal-Charismatic theology of religions. This is done over three chapters, where he lays out the framework, proposes a way of doing such a theology, and arguing that Pentecostals need to develop a theology of religions. Yong is a theologian, but he is also a missiologist. Thus, he understands the need for Pentecostals to have a theology of religions as they engage in mission. They need not only to develop a theology of religions, but Yong believes that they need to engage in interfaith dialog. They need to do so respectfully, and with an openness to learn. All of this is part of the process of discerning one's own identity as a community. It also has to do with the way we understand truth. What is true in another faith tradition? Then in chapter 6, Yong introduces resources for this conversation. He suggests that there are three primary categories by which one can explore the question of the Spirit's presence. These are religious experience (are their signs of religious experience), religious utility (does it do something for the adherent, including but not only, ethical transformation). Finally, is there a religious cosmology. How does one understand religious presence and absence?

Having laid out methods and criteria for the conversation, and in the process proposing a theology of religion rooted in the Pentecostal-charismatic tradition, he tests his theories by comparing Pentecostalism with another faith tradition. The tradition he chooses is the Afro-Brazilian religion of Umbanda. Both Pentecostalism and Umbandaism are on the rise in Brazil. There are similarities in religious experience and major differences. The two essentially compete for space in the religious world of Brazil. He asks the question of whether the Spirit is present, without coming to a firm answer. But answers aren't the purpose here. It is the conversation, with the hope that both communities can learn from each other and perhaps be enriched by the conversation.

Yong concludes his book with a set of theological questions. He does so with the anticipation that this dissertation is but the first step in the process of devising a Pentecostal theology of religions and not the last word. That is true. I know that Yong has continued the conversation. In one sense, one might want to start reading one of Yong’s more recent books on this topic before taking this up. This is the kind of book that one turns to after first diving into the question, and then once acclimated, one might be ready to go even deeper into the methodological resources. Such is the case here.

So, do I recommend the book? Yes, I do, if you’re ready for the academic nature of the book. So, it’s not for everyone. Nevertheless, it’s an important contribution to the conversation. It also helps us understand Yong’s own perspective on these issues.