The Triune Nature of God -- A Book Announcement 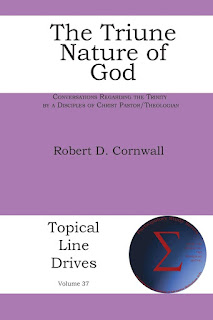 As for me, I am a Trinitarian by confession. I'm also a Disciple of Christ pastor, and so I serve a congregation and a denomination that is non-creedal and struggles with the doctrine of the Trinity. As you can see by the paragraphs that follow from the introduction to my new book on the Trinity, I recognize the challenge we face. This little book, which I'm inviting you to purchase and read, was born out of a larger project that I've been working on that is designed to further our theological conversations within congregations. Who are we? What do we believe? How does what we believe fit within the larger Christian community? This is as much an ecumenical question as it is a denominational one. So here is a first attempt, which I carved out of a larger conversation about the nature of God and expanded. It is titled:  The Triune Nature of God: Conversations Regarding the Trinity by a Disciples of Christ Pastor/Theologian. While I write for Disciples, I am really writing for the larger Christian community of which we are a component.

With this booklet, which focuses on the doctrine of the Trinity, I hope to initiate a conversation concerning the Trinity both within my tradition as well as outside it. This effort emerged out of another project, in which I am seeking to provide a guide to theology for members of my tribe, the Christian Church (Disciples of Christ). I serve this tradition as a pastor, historian, and theologian (my Ph.D. is in historical theology). While the Disciples do not have an official creed, I am by confession a trinitarian Christian. That is, I am willing to affirm the definition of God found in the Nicene Creed, even if my understanding of the details might differ from others who make the same confession. At the same time, as a Disciple, I cannot and will not make the Creed or belief in the Trinity a test of fellowship. Since we are a non-creedal community, such a requirement would be difficult to implement, but it would also be a self-defeating effort. It will do nothing to convince non-trinitarians of the value of this long-held doctrine of the church.

While we are non-creedal that doesn’t mean we are anti-theological. It simply means greater weight is given to Scripture than to later developments. Thus, Barton Stone, who was one of the founders of the Stone-Campbell Movement, of which the Disciples are but one branch, would accept as true only that which is provable from Scripture. Since the term Trinity is not found in Scripture, members of this faith community will need to agree to disagree on what some of us believe is an important matter of Christian theology. Another way of putting this is to say that while we are noncreedal, that does not mean that everyone within the Disciples community rejects the testimony of the historic creeds. It does mean that affirming the message of these creeds is a personal decision, not one imposed from on high.

Copies can be obtained from Amazon (click on title) and other outlets such as Barnes & Noble. You can also order direct from the publisher's bookstore, where a non-Kindle ebook is also available at the moment.
Email Post
Labels: Books Christian Church (Disciples of Christ) Stone Campbell Movement Theology Trinity