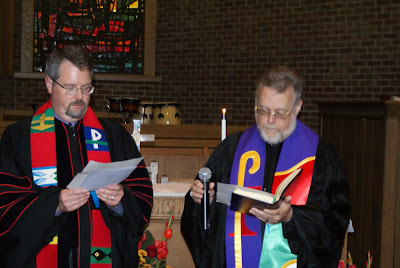 Last week I posted a couple of pieces suggesting that Disciples of Christ (my denominational tribe) might benefit from some more overt theological discussion. As one colleague responded, we tend to start with ecclesiology. Most of our denominational disputes have been over things like ministry, baptism, church structure. We haven't divided over the Trinity, though that has been a subject of controversy down through the millennia. Regarding the Trinity, I've written a small book titled The Triune Nature of God, which is intended to stir some conversation (but not impose a Trinitarian perspective on Disciples).

As a denomination, our "tradition" is to be noncreedal. We have valued freedom as a virtue. I titled my book on Disciples core values Freedom in Covenant, where I lay some of this out in more detail. But here's the question -- might we benefit from engaging with different creeds and statements of faith, not as tests of fellowship, but as points of conversation?

So, with this in mind I thought I would share a few paragraphs from the section in Ronald Osborn's book Experiment in Liberty,, Under the subtitle of "Anticreedalism," he notes that "both Stone and the Campbells struck repeated blows against creeds in order to secure Cristian liberty for the believer." (p. 94).  Note that they were raising the quest for liberty or freedom, something that was in the air early in the 19th century.  Osborn noted that this influenced the way theology was understood:

The downgrading of human speculation extended from the creeds and confessions to include the whole theological enterprise. Systems of thought which went beyond the evident teachings of Scripture (presumed to be clear and uniform throughout) were dismissed as confusing and lacking in value. So Alexander Campbell wrote into the charter of Bethany College a provision prohibiting the teaching of theology. Yet he conducted daily lectures on the Bible which all students were required to attend. (Experiment in Liberty, (Bethany Press, 1978) p. 94).

The plain teaching of the Bible was the authority for the early Disciples community. While they didn't value "theology" as it was generally understood,and while rejecting creeds, Osborn notes that they did talk a lot about "first principles" "These included the 'steps of salvation' (traced out by Walter Scott, but credited to the New Testament, the immersion of believers as the only true baptism, the weekly 'breaking of bread, the sole propriety of biblical names for the church, the rejection of human creeds, and the union of Christians on the basis of these essentials."  (p. 95). No creeds, but first principles. No Trinity, but immersion.

He goes on to suggest that there had been numerous cases where creeds were used in Disciples services. The Preamble to the Design has been used in worship. He notes that most Disciples didn't flinch at the COCU proposal that asked the churches to use "the Apostles Creed and the Nicene creeds as 'classic expression fo the Christian faith,' and not as tests of fellowship. (p. 96).

Here is the closing paragraph, and with it, I'll close the post and invite response:

Some persons at the extreme left, as at the extreme right  have appealed to the anti-creedal heritage in protesting 'official' or corporate stateents describing what Disciples believe. One of the deepest instincts within them all opposes any coercive use of creeds. Yet Disciples sometimes confess a sense of theological inadequacy owing to their lack of a confessional traditoin. Many are concluding that perhaps creeds are not entirely bad. In a time of widespread biblical ignorance, when the presuppostions of the culture threaten to engulf the church, many Disciples welcome the freedom of the people of God to proclaim their corporate faith and to teach it through creeds both old and new. (p. 96)

.Note that Osborn suggests that the introduction of creeds in worship and in conversation is done in freedom. That is, there is no coercive intent. These documents some old and some relatively new serve us only as signposts. We ay not affirm everything, but they do serve as reminders of the broader Christian community. So what do you think? Might the Apostles Creed, for instance, be useful as a starting oint for the conversation?
Email Post
Labels: Christian Church (Disciples of Christ) Creeds Ecclesiology Freedom Ronald Osborn Theology Trinity

Rev. Kate Epperly said…
As a lifelong Disciple you can imagine my great surprise upon taking a course on Christian Creed's early in my seminary education. I was raised with No Creed but Christ!" Other Disciples may have been raised that way too...so for me the place to begin is "Who and what is Christ?"

Rev. Kate Epperly said…
As a lifelong Disciple you can imagine my great surprise upon taking a course on Christian Creeds early in my seminary education. I was raised with "
No Creed but Christ!" Other Disciples may have been raised that way too...so for me the place to begin is "Who and what is Christ?"

Robert Cornwall said…
Kate, having been raised Episcopalian, I grew up reciting the creeds. I'm comfortable with them, though I have no interest in imposing them. But the question for Disciples is how do we express our faith? For Stone and Campbell, it was biblical confessions, primarily Matthew 16:16.
7:03 PM