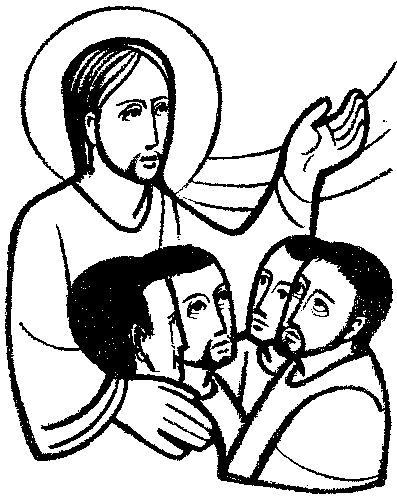 
When Jesus concluded his farewell remarks, he looked up to heaven and said: “Father, the hour has come; glorify your Son so that the Son may glorify you” (Jn. 17:1).  With these words, Jesus began what is often called his “High Priestly Prayer.” In a few moments, he will leave for the Garden where he will be arrested, but first Jesus prays for himself, for his disciples, and for everyone who will believe in him through the witness of his disciples.  Two words stand out in this prayer—the words in and one, which in Greek are en and hen. The word in reminds us that our oneness is rooted in a relationship that begins with Jesus and the Father, and then extends outward to include everyone who will believe.

The prayer begins in verse one, but we pick up the prayer in verse 20. Jesus has already prayed for himself, that God would glorify him. He has prayed for the disciples, asking that they would be one as he and the Father are one. Now, Jesus focuses on those who will believe that the Father has sent him through the witness of his disciples. Jesus isn’t praying that others will come to believe. He’s praying for those who will believe and participate in the oneness that Jesus shares with the disciples and with the Father. In this prayer, Jesus reveals that the witness of the disciples will be enhanced by their oneness as a community.

Jesus’ prayer that the disciples and those who will believe through their witness is the foundation for the Ecumenical Movement. It’s also one of the foundations of our Disciples identity. Alexander Campbell reflected on this passage in his Christian System, and declared that “Nothing is essential to the conversion of the world but the union and cooperation of Christians.” He went on to say that “Nothing is essential to the union of Christians but the Apostles’ teaching or testimony.” (Christian System, p. 107).  We Disciples have put a lot of emphasis on Christian unity. Barton Stone called this pursuit our “polar star.” While Christian unity is an important, even essential, element of our witness, it’s not an end in itself. Instead, it would seem to be a means to something greater— the reconciliation of all things in God, so that the world itself might share in the oneness that Jesus shares with the Father. Or, as Campbell put it, the “conversion of the world.” Unfortunately, we haven’t yet achieved the kind of unity envisioned by Campbell, let alone the kind of unity envisioned by Jesus.

There’s a reason for this. Some of you may remember the sermon Jose Morales preached at the last General Assembly. He drew his sermon from John 17, and he titled it “Heresy of Heresies: ‘From Deadly Unity to Life-Giving Unity.’” He used the word heresy to describe his claim that not all forms of unity are good. In other words, unity for the sake of unity might be dangerous. This is why he suggested that “unity is hard.” It’s also inconvenient.  According to Jose, unity isn’t a good thing if it’s based on allowing injustice to persist in our midst. This form of unity is an idol that keeps us from recognizing the kind of unity Jesus envisioned as he prepared to go to the cross. So, as Jose puts it “safe unity is no unity at all.”

Over the past two weeks, we’ve heard Jesus call for us to love one another as he has loved us. We’ve heard him speak of a form of peace that is very different from the kind of peace offered by the world. Now, he prays for unity, through which the love of God for the world will be revealed (Jn. 3:16). He prays for his disciples, including the disciples who will believe through the witness of those gathered with him, asking that they might enjoy the same unity that Jesus enjoys with the Father. We see this message revealed in the closing words of Jesus’ prayer:

The love of God poured out on the disciples through Jesus, and through their witness, that love is revealed to the rest of the cosmos. If we believe then we will be drawn into the internal relationship that is God.

John can get a bit abstract. His message isn’t as earthy as Mark’s, which is why we have more than one Gospel. John’s version is more mystical, more cosmic. We need both the earthy and the cosmic testimonies to truly understand who Jesus is. In this prayer, we get a sense of what some call the Cosmic Christ. In this prayer, everything begins with God’s act of restoring to Jesus the glory that was his before the world existed (Jn 17:5).  This statement takes us back to the beginning of John’s Gospel because in John conversations about Jesus’ identity begin in the prologue, where we read: “in the beginning was the Word, and the Word was with God, and the Word was God.  He was in the beginning with God” (Jn. 1:1-2) This Word, is the light that shines in the darkness (Jn. 1:5). John the Baptist bore witness to the light, “so that all might believe through him” (Jn. 1:7).  This “Word became flesh and lived among us and we have seen his glory, the glory as of a father’s only son, full of grace and truth” (Jn 1:14).

In John’s Gospel, Jesus is the revelation of God’s presence on earth. If you want to see God, then look to Jesus. What does he teach? What does he do? What do his miracles suggest about his identity as the Logos or Word of God, who became flesh and dwelt among us?

John’s vision of the Cosmic Christ suggests that Jesus transcends this world, because “all things came into being through him, and without him, nothing came into being” (Jn. 1:3). Therefore, everything that exists finds its meaning, purpose, and redemption in Jesus, who draws us into his own life so we can share in the life of God. This is what it means to experience eternal life or put on immortality. It means being drawn into the life of God.

Here is the foundation for our unity. It’s not something we create through doctrine or institutions. It’s something that comes from God through Jesus to us. For, “as you, Father, are in me and I am in you, may they also be in us, so that the world may believe that you have sent me.”

This cosmic fellowship extends outward from the eternal relationship of Father and Son and Holy Spirit. The Holy Spirit may not appear in this prayer, but we know already that God is sending the Paraclete, the Holy Spirit, to be with the believers, as they live out their calling to be witnesses to the glory of Jesus. Ultimately, this prayer extends out to include us and everyone who believes. You might envision this as a set of concentric circles moving outward to embrace all of creation, so that in the words of Paul “in Christ God was reconciling the world to himself, not counting their trespasses against them, and entrusting the message of reconciliation to us” (2 Cor. 5:19).

This is the foundation of Christian unity. Unfortunately, this unity is difficult to attain, because too often we try to create it through imposing doctrinal statements and by building institutions. When we do this, we tend to neglect the source of our unity—God, whom we can experience as “Father, Son, and Holy Spirit, Mother of us all.” In other words, as Marianne Meye-Thompson puts it, “their unity is organic, not because of human effort but because of God’s life-giving love for the world that is expressed through and in the mission of Jesus” (John: A Commentary, p. 356).

John invites us to share in this unity Jesus prays for. It is a unity that,  as Jose Morales reminds us, “is grounded in, and emerges from, service and sacrifice. Between washing feet and taking up a cross.” This kind of unity is not safe and it’s not easy. In fact, “it is dangerous and radical” [Preaching as Resistance, p. 45]. It requires us to let go of control, so we can be drawn into the eternal fellowship that is God.

So, what would Jesus have us do? How might live out of this unity that is rooted in the very being of God? June is “Pride Month.” Rick took a few of our people on a field trip to learn about the Ferndale Pride Festival. Becoming “Open and Affirming” was not easy.  In fact, it was costly, but necessary if we were to fully experience the unity that is to be found in the Cosmic Christ who is encountered in Jesus the Liberator.

Jesus prays for us that we might be drawn into that divine fellowship that transforms the cosmos. May we receive that witness, and then share it with the world around us, for God loved the world enough to send Jesus into our midst, that we might be reconciled and made whole through our union with God in Christ.