Theology and the Disciples -- expanding the conversation 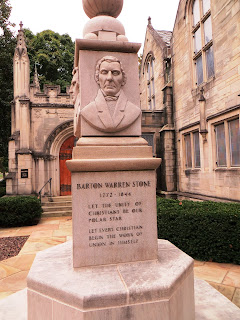 Yesterday, I posted the question: Why Theology? I asked this question specifically to those who are part of my own denominational tribe, but it is a question that ought to be a concern for any who proclaim some form of belief in God. Being that the Disciples or Stone-Campbell Tradition is non-creedal, we tend to be all over the map when it comes to theology. There are conservative evangelicals in our midst and modernists (if I can use that term in the 21st century) amongst us. Over the four decades or so that I've been wandering with this community of Christians (I attended a Stone-Campbell college while still part of the Foursquare Church), I've discerned a discomfort with theology. This shouldn't surprise us as the founding generation was less a bit averse to it as well.

I am finishing revising an article that will appear at some point in the Restoration Quarterly that explores a schism that occurred in Detroit that presaged the Disciples/Churches of Christ split that emerged over the 19th century. As I revise the article I've given some attention to one of the most important analyses of our movement, one that focuses on the social sources of division.

I found this paragraph in David Edwin Harrell's second volume of Social History of the Disciples of Christ to be illuminating. I want to share it, offer a few points of reflection, and invite responses. One of the questions that members of the three branches of the Stone-Campbell Movement have wrestled with concerns who best represents the founders. The best answer is that all three represent elements of the founding emphases. So, here is what Harrell has to say:

In truth, however, theology played a limited role in the development of the church during the antebellum period. Most of the early leaders of the movement skirted the major theological issues of the day. They studiously avoided unitarianism and were only passingly interested in millennialistic enthusiasm; for the most part theological concern was not typical of them. Few Disciples were equipped by training to pursue serious theological study. Disciples leaders were Arminian, but generally by assumption rather than argument. The key to their success was simply confidence in the literalistic restoration of New Testament Christianity. Their program of restoration was based on simple reforms: the abandonment of all names except such biblical terms as Christian and Disciple; regular participation in the Lord's Supper every first day of the week; and the establishment of independent congregations with biblically authorized officials.  [Sources of Division in the Disciples of Christ, 1865-1900, (University of Alabama Press, 2003), p, 4].

Our founders were, for the most part, heirs of the moderate Enlightenment project that was championed by, among others, John Locke. Whether they read Locke or not, they lived in that ethos. They looked for a simple Christianity, and doctrines like the Trinity are not simple. Their success on the frontier was due in large part to their focus on the simple gospel, which could be easily understood. There some who had some theological sophistication, but many were self-educated. We are heirs of this opening generation, but I don't believe we are in quite the same place as they were. I know that Disciples (my tribe) are not interested in a literalistic restoration of New Testament Christianity, but at the same time, there is a tendency to evade serious theological conversation as it is believed by some to be an imposition on others. So we privatize our theology. I'm not sure that is helpful, but it is something I've observed, even among the clergy. Is that, however, a healthy path for us to take?  As we think on these issues, I wonder if we're better off being noncreedal than if we were to receive the wisdom of the early creedal statements? Something to chew on I suppose.
Creeds David Edwin Harrell Disciples of Christ division noncreedal Christianity Stone-Campbell Movement Theology

Ed Dodds said…
The Late David McWhirter's (incessant) indexing taught me - you can learn a lot from those journals. And the centennial celebrations and congregational history writings which cause folks to visit those Disciples of Christ Historical Society congregational archives leave many folks shocked while reviewing materials about which issues previous ministers took a stand -- and which side they took. https://www.discipleshistory.org/
3:08 PM

scott caulley said…
Scott Caulley--
Stone-Campbell folks are not alone in their unease over theology. Although perhaps for different reasons, many are working through a (long-recognized) "crisis" in the intersection of biblical studies and theology. Anyone who "does" church (preaching, teaching, worshiping), "does" theology at some level. But how to bridge the gap between exegesis and application? Biblical Theology was a brave if ill-fated experiment (according to many). Stendahl's "what it meant" vs. "what it means" indentified the prevailing approach but did not solve the hermeneutical problems. Childs's canonical reading cuts us loose from exegesis (or so it is charged). And now churchmen and women are leaving it all behind for "the theological interpretation of scripture." But does not this move simply thrust us back into the confessional divisions against which our Stone-Campbell founders reacted?

I'm teaching hermeneutics in the fall--I hope by then to have some understanding of the questions. If I knew the answers, I'd write a book.
9:19 PM

Robert Cornwall said…
Scott, from the perspective of one trained in historical theology rather than biblical theology, I wonder if we can get away from questions of confessions that lead us "beyond" Scripture alone. In other words, our founders assumed a perspective on Scripture's clarity that has proven faulty. As for the book -- go for it!