The Word in the Flesh -- A Christmas Eve Meditation (John 1)

Here on Christmas morning, as many of us gather in the Spirit of Christmas, I wish to share the meditation shared at Central Woodward Christian Church during our Christmas Eve service.


Christ is born, give glory; Christ is from the heavens, go to meet him; Christ is on earth, be lifted up. “Sing to the Lord, all the earth,” and, to say both together, “Let the heavens be glad and let the earth rejoice,” for the heavenly one is now earthly. [Gregory of Nazianazus, Festal Orations, p. 61].

I think these opening lines of Gregory of Nazianzus’ oration “On the Nativity of Christ” offer a useful summary of why we gather together on Christmas Eve. We’ve come to greet and meet the “heavenly one [who] is now earthly.”

On Christmas Eve we enter a mystical world. We’re invited to contemplate John’s message that the Word of God assumed flesh and dwelt among us so that we might see his glory. Tonight we gather in the mystical presence of angels, shepherds, and, even the magi to give thanks to God for the child born in the “little town of Bethlehem” in which “shineth the everlasting Light.”

While the Gospel of Luke directs our attention to the newly born child, whose parents have taken refuge among the animals because there is no room for them in the town’s proper lodgings, the prologue to John’s Gospel takes us on a cosmic journey from the heavens to the earth and back again.  Together they shine a light on our world and remind us that God is present with us in and through Jesus the Christ.

While John’s prologue to his gospel takes back to the beginning of creation, in which all things were created through the Word that is God, he also reveals that this Word assumed flesh and dwelt among us so that we might see the glory of the father’s son.  While no one has seen God, John tells us that “God the only Son, who is close to the Father’s heart, . . . has made him known” (Jn. 1:18).

John also tells us that through the Word who became flesh, light has shined into the darkness, and the darkness cannot overcome it. In a few moments, we’ll come to the table, receive communion and a candle. When everyone has their light, the room will darken. While we stand in darkness, it will not consume the light.  These lights that have become a Christmas Eve tradition in so many churches, call on us to carry the heavenly light that comes through the Word in the Flesh into the world. In this, we can find both joy and hope, even when darkness surrounds us.

What we’ve come here to do tonight requires an act of faith and a bit of imagination. That’s because the evening asks us to ponder how the Cosmic becomes human?

The creché that sits before the table combines two Christmas stories. It brings together Luke’s shepherds and Matthew’s magi. While the historical-critical side of me wants to keep the stories separate, maybe there’s a reason why we bring them together into one story. In both stories, we see light shining into the darkness. In one case it’s the appearance of angels, and in the other, it is a star shining in the night sky. Both the angels and the star announced the birth of the heavenly one who has become earthly. John might not have a birth story, but maybe he would approve of this merger of stories. 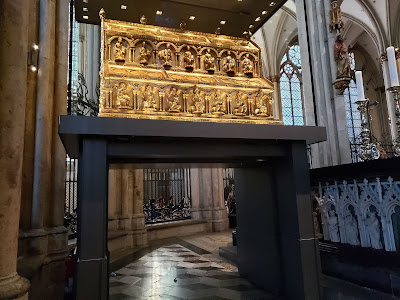 When Cheryl and I visited the Cologne cathedral this fall, we saw the golden reliquary or box that contains bones said to belong to the three magi who visited Jesus in Matthew’s gospel. The guide told us how the bones got to Cologne, but as to whether these bones belong to the magi, she suggested that this is a matter of faith. While I tend to be skeptical about such things, I was strangely moved by this encounter with an ancient object of devotion. So, I lit a candle to mark my encounter with the divine mystery symbolized by this shrine.

Tonight, the stories and carols of Christmas invite us to enter into the divine mystery revealed to us in the Word of God who became flesh and dwelt among us. Having encountered the “heavenly one [who] is now earthly,” may we follow John the Baptist and testify to the light “which enlightens everyone.” By taking up this calling, let us shine the light of God’s glory into the darkness of our world. In bearing witness to the light revealed in the Word who assumed flesh, may we join the angels on high singing “Gloria in Excelsis Deo.”