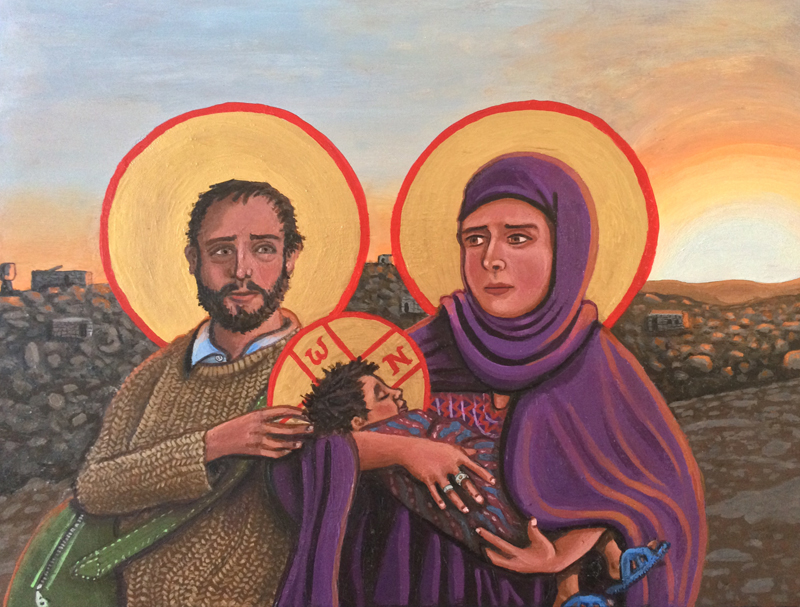 10 It was fitting that God, for whom and through whom all things exist, in bringing many children to glory, should make the pioneer of their salvation perfect through sufferings. 11 For the one who sanctifies and those who are sanctified all have one Father. For this reason Jesus is not ashamed to call them brothers and sisters, 12 saying,

“I will proclaim your name to my brothers and sisters,
in the midst of the congregation I will praise you.”

“I will put my trust in him.”
And again,

“Here am I and the children whom God has given me.”

14 Since, therefore, the children share flesh and blood, he himself likewise shared the same things, so that through death he might destroy the one who has the power of death, that is, the devil, 15 and free those who all their lives were held in slavery by the fear of death. 16 For it is clear that he did not come to help angels, but the descendants of Abraham. 17 Therefore he had to become like his brothers and sisters in every respect, so that he might be a merciful and faithful high priest in the service of God, to make a sacrifice of atonement for the sins of the people. 18 Because he himself was tested by what he suffered, he is able to help those who are being tested.

****************
In the minds of many, once the presents are opened and the meal consumed, Christmas is over. We’ve probably had enough Christmas songs to last us until Thanksgiving 2020. By the Sunday following Christmas, unless Christmas falls on a Saturday, we’re ready to move on to the next holiday. Liturgically, however, when the church gathers for Christmas Eve the season of Christmas is only getting started. There are twelve days to go until Epiphany. So, as the church gathers on the first Sunday after Christmas, in the Year A, the second reading from Scripture comes from Hebrews 2. Now, from the looks of things, this reading from Hebrews 2 looks more appropriate for Good Friday than the Christmas season. But in many ways, this is a perfect follow up text to what we’ve heard in the week’s prior. That’s because this reading lifts up Jesus’ role as the pioneer of our salvation.

We don’t know who wrote Hebrews, or even when it was written, or where it was written. It has the feel of something that a Jewish Christian audience would understand since Hebrews makes a lot of use of Temple and Priestly imagery that draws from Jewish practice. In this reading, we hear that Jesus is the pioneer of our salvation and that God used his suffering as a way of perfecting him in this role. We also are told that Jesus is both high priest and sacrifice, and it’s through his “sacrifice of atonement” that the “sins of the people” are wiped away.

The phrase “sacrifice of atonement” can give many persons of faith pause, in part because of the popularity in some circles of “penal substitution atonement theory,” which presumes that human sin requires a perfect sacrifice, often to appease God’s wrath or satisfy God’s honor. We should probably put aside these understandings, as it’s not clear that the author of Hebrews held to either view of substitution. What the author does is draw upon the Jewish Temple rituals, which provide the backdrop for understanding the person and work of Jesus, who is understood to be a priest of the order of Melchizedek. In other words, Hebrews draws on Temple imagery, but he draws on a different conception of the priesthood, for Jesus doesn’t descend from Aaron. But the use of Temple and Priestly imagery does raise questions of date, and more specifically whether it was written before 70 CE, while the Temple was still in operation. Unfortunately, we simply don’t know.

One element that stands out here is that Jesus is one who has suffered. Reference is not made directly to the nature of that suffering, but it is the key. He has, in his own life, suffered in a way that makes atonement for sin. He is the sacrifice that takes away the sins of the world. One way of reading this is to see Jesus, the pioneer of our salvation, and our brother, as a fellow sufferer. Richard Ward puts it this way:

It is that experience of suffering as a human being that makes Jesus fully one with human beings. The idea that the preexistent Son was joined with human beings in the experience of suffering infuses the sufferer’s plight with meaning. The sufferer has “help” in the person of Jesus (2:18), who serves as “pioneer” and “priest” on their behalf—”priest” because through him they have access to God’s abundant grace and are brought into God’s presence; “pioneer” because he models trust in God, even as his faith in the goodness of God is being tested.  [Connections: A LectionaryCommentary for Preaching and Worship,  Kindle Edition, loc. 4055].

As our brother and fellow sufferer, Jesus can lead us forward along new paths of trust in God. He has been tested as we have and has remained faithful to his calling. This is important, especially if the future is open and not predetermined. Will we remain faithful? Later in the book of Hebrews, attention is given to the faithfulness of Abraham and other saints, who remained loyal to God despite not seeing the fullness of God’s promises realized during their lives.

Perhaps the key to this passage is the declaration “that through death he might destroy the one who has the power of death, that is, the devil, and free those who all their lives were held in slavery by the fear of death” (Heb. 2:14-15). What is our greatest fear? It could be suffering, but in many ways it is death. Paul talks about death being the final enemy, which Jesus overcomes in his death and resurrection. Here the one who holds the power of death is the devil, but through his own death, Jesus frees those held in slavery to death. Athanasius puts it this way: “For by the sacrifice of His own body, He both put an end to the law which was against us, and made a new beginning of life for us, by the hope of resurrection which He has given us. For since from man it was that death prevailed over men, for this cause conversely, by the Word of God being made man has come about the destruction of death and the resurrection of life”        [https://www.ccel.org/ccel/schaff/npnf204.vii.ii.x.html].

While this reading may seem out of place, it does seem to echo the message found in the Gospel reading for the day, which speaks of the slaughter of the innocents (Mt.2:13-23). Jesus escaped the first attempt on his life, but eventually, he faced death, and in doing so, he overturned the power of death. At the same time the connection in the lectionary of these two passages, and their word concerning suffering and death calls on us to consider not why God didn’t spare the children, but why Herod (and all who follow his example) engage in such behavior. It takes the focus off of God and puts it on us. As siblings of the suffering servant, whose birth we celebrate, we are enabled to take a different path from that of Herod. This is the way of freedom from sin and death, that was pioneered on our behalf by the one who is our fellow sufferer, so we no longer have to fear death.