Peace with God - A Lectionary Reflection for Pentecost 2A (Romans 5) 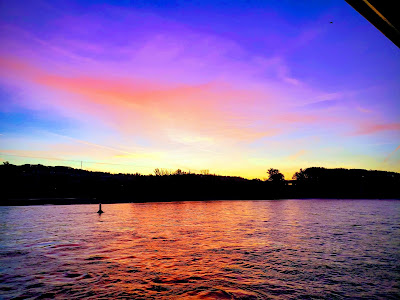 Therefore, since we are justified by faith, we have peace with God through our Lord Jesus Christ, through whom we have obtained access to this grace in which we stand; and we boast in our hope of sharing the glory of God. And not only that, but we also boast in our sufferings, knowing that suffering produces endurance, and endurance produces character, and character produces hope, and hope does not disappoint us, because God’s love has been poured into our hearts through the Holy Spirit that has been given to us.

For while we were still weak, at the right time Christ died for the ungodly. Indeed, rarely will anyone die for a righteous person—though perhaps for a good person someone might actually dare to die. But God proves his love for us in that while we still were sinners Christ died for us.

We have passed through Pentecost and Trinity Sunday, which means the long post-Pentecost season has begun. Some call this ordinary time, but there’s nothing ordinary about this time in history. We’ve been feeling the stresses of a pandemic for the past three months. Though it may be easing, at least in some places across the world, the threat hasn’t gone away. People are still getting sick and dying. This pandemic, which has affected the global economy as well as our physical and mental health, has been compounded by several killings of black men and women, often at the hands of police.  Sheltering in place has given way to protest marches (I’ve participated in one of them here in Troy). Church life has taken on new forms since we’ve been unable to gather in person. For some this has been a season of true suffering. For others of us, the suffering has been less physical and more mental and emotional. In the midst of all of these challenges, which include suffering for at some among us, we are reminded by Paul that having been justified by faith in Christ, we can now have peace with God.

Paul begins chapter 5 of Romans with the word “therefore,” which means that what we have before us is rooted in what came before. In chapter 4 of Romans, Paul speaks of the promise made to Abraham, that his descendants would inherit the world, a promise Paul suggests requires faith. That faith comes to fruition in the death and resurrection of Jesus. This is the foundation of our justification, our righteousness before God. Through faith in God, which results in justification, we have peace with God. Any enmity or division that results from sin, is set aside as we receive grace through Christ. Regarding this faith that justifies, Karl Barth writes that “by faith we attain the status of those who have been declared righteous before God. By faith we are what we are not” [Barth, Romans, p. 149]. In Christ, we become a new person, and this not of our own doing, but God’s. As such we are becoming that new person who can share in God’s glory. It is in essence a matter of grace.

Regarding this peace with God that comes through God’s justifying grace, I again to Barth. Barth writes that this peace is “effected by a God-given transformation of man’s whole disposition, through which the proper relation between the Creator and the creature is re-established, and by means of which also the only true and proper love towards God is brought into being—the love which has its beginning in fear (v. 5)” [Barth, Romans, p. 151].  For Paul, peace results not from our initiative but by God’s. That might not suit some who feel the need to start the process without God first engaging with us. One might not appreciate Barth’s vision of revelation, in which one cannot have any knowledge of God outside what God chooses to reveal, but that vision does seem to be rooted here in Paul’s letter to the Romans. The key here is Paul’s declaration that all of this comes to fruition in Christ our Lord.

As we take this journey through “ordinary time,” the goal is reaching that moment we call Christ the King Sunday. There is an eschatological dimension to this story. We are moving toward that moment when we share in the hope of glory. While that is the goal, Paul reveals that the path may start with suffering, but that suffering can produce endurance, and endurance, character, and character can produce hope. This hope doesn’t disappoint. That is because the love of God is poured into our hearts through the Holy Spirit. Again, Paul tells us that God is at the forefront of this work of transformation. While God is leading, that doesn’t mean we remain passive. We receive this grace through faith so that it can begin its work in us.

If we look more closely at this process, it begins in a recognition that suffering, while not something that we should pursue, can provide a setting where our lives can be changed. The problem, of course, is that passages like this have been used to rationalize suffering as if it has redemptive value. That is not how to read this, but it’s been used that way. Perhaps we can think here in terms of testing. I’m not much of an athlete, and I’ve not put my body to the test as some do, but I know anecdotally, that endurance requires one to push the body. You don’t just go out and run a marathon without training. So maybe that’s how we should read this but do so spiritually. As we push ourselves, taking risks, we grow. We build spiritual endurance, which leads to tested character, and finally to hope. All along the way, we find ourselves being tested. This path to glory isn’t rooted in what Dietrich Bonhoeffer calls “cheap grace.” The grace that gives us hope is costly. It’s costly to us, but even more so to God.

The good news that Paul wants to share with us is that God in Christ intervened while we were still weak, providing the means by which we, who are estranged from God, might return to God. I want to draw attention to that word weak. It is often said by critics of religion, that it is a crutch for the weak. In a culture like the one I live in, weakness or meekness, are not qualities to be respected. In fact, we live in the age of the strong man, where qualities like compassion and empathy are considered unmanly. What is true today was true in the first century. The Romans respected virility. Thus, by dying on a cross Jesus demonstrated weakness. So not only did he die when we were weak, burdened by sin, but he because weak so that we might be empowered. Thus, “at the right time Christ died for the ungodly.” This, Paul says, is how God showed love for we who are sinners—that Christ died for us.
As we hear that Jesus died for us, we need to be careful with how we interpret these words. Numerous atonement theories have emerged over time. Some suggest that Jesus died as our substitute, facing God’s wrath on our behalf. That’s called penal substitution, which is a version of Anselm’s satisfaction theory, which is rooted in feudal understandings of honor. The point here, as I read it, is that God in Christ has taken steps to reconcile us with God. Note here that this is an expression of God’s love, not God’s wrath. It is true that in verse 9, Paul does speak of being saved from God’s wrath through Christ’s blood, but we need to be cautious here. We might be best served simply to see that God, in God’s love, demonstrated in the cross, has led to reconciliation. This means becoming the new human. As Barth puts it:

The glory of God (v. 2), which is presupposed in the death of Christ, is not merely a new object; it requires a new subject. And this new subject—only by faith identical with me, a sinner!—is the new man, who with unquenchable certainty knows himself in Christ to be beloved of God. [Barth, Romans, p. 162].

As the beloved of God, we can taste the glory of God, for in Christ we are united with God. That is the gift of grace. Therein is peace with God!