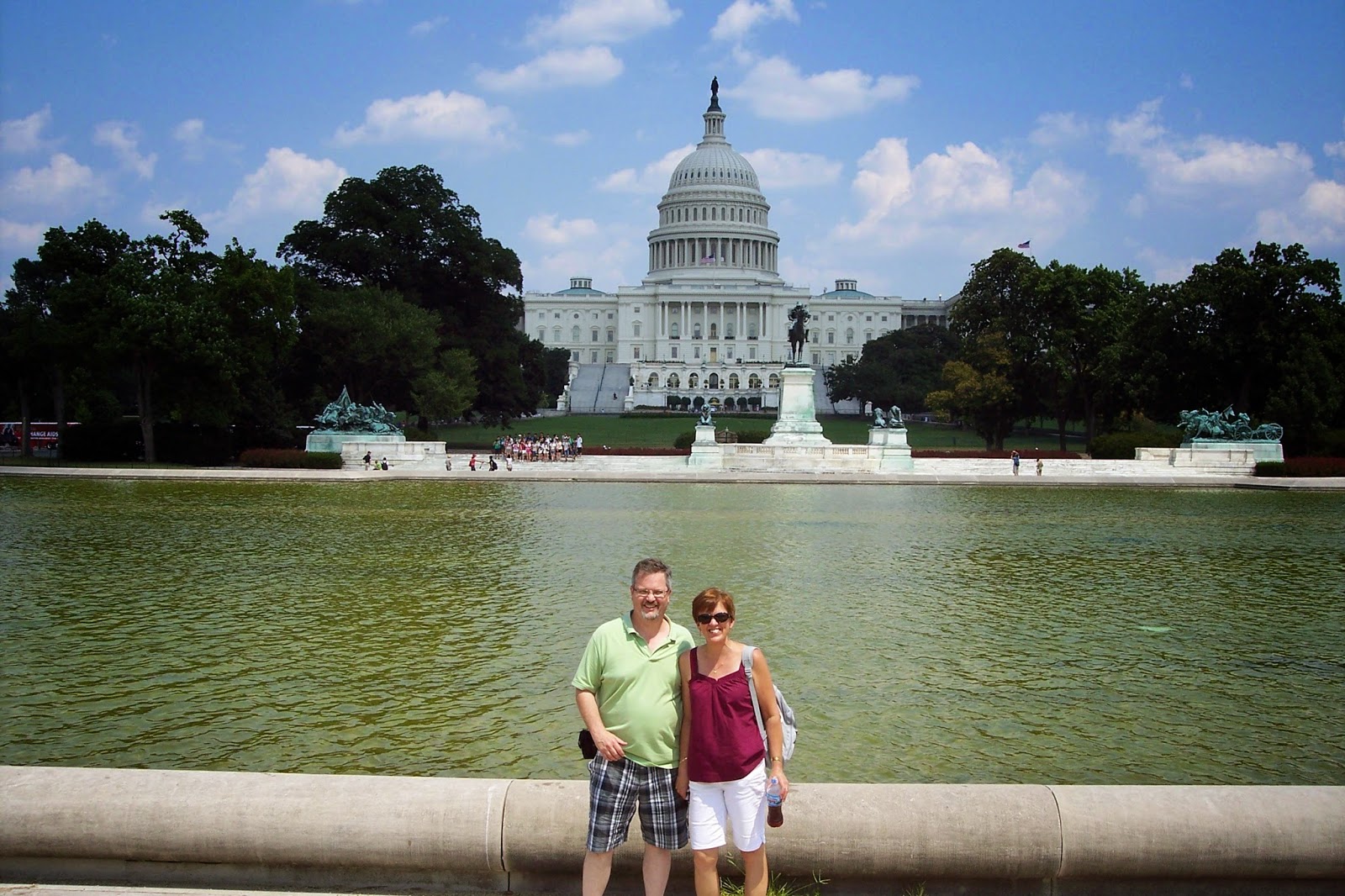 Note:  The Gospel reading for Sunday comes from Matthew 22:15-22. The only time I've preached on the text came in 2002, before I started blogging.  I decided that it might be helpful/useful to share this sermon for the first time outside First Christian Church of Santa Barbara.

When I was young, I think ninth grade, I thought about being a politician.  We had a class called SUTOE, which was short for Self Understanding Through Occupational Exploration.  I think you can understand why we called SUTOE.   This class was supposed to help us decide what to do when we grew up.  Since I was thinking about politics, I decided to visit with an attorney.  After all, most politicians start out as attorneys.  So Harold, when are you going to run for office?

My interest in politics comes naturally.  My father served as Richard Nixon's campaign chair for San Francisco in the 1962 gubernatorial election.  When we moved to Mt. Shasta my dad served as chair of the Republican Central Committee and had a weekly radio program.  My mother got involved as well, serving as President of the Republican women and attending the 1966 National Republican Women's convention in Washington D.C..  My turn came after we moved to Klamath Falls.  I got to meet Bob Packwood when he was running for the senate in 1968 and I stood along the road and helped welcome Richard Nixon when he came to town that same year.  In 1972 I worked in party headquarters and went door-to-door polling people on their presidential choices.  So, by now I should be a member of congress, don't you think?  Strangely, something happened along the way and my life went in a different direction.

Instead of politics, I went into religion.  And, as you all know, religion and politics go together like oil and water.  Of course, you also know that there are two things one should not talk about in polite company, religion and politics.  So, I guess I'm up a creek without a paddle.  The only thing left for me to talk about is sports, and since I'm an avid Giants fan living in Angel territory, I guess I'm not a safe candidate for a dinner invitation!  Oh, by the way, I'm now a Democrat, much to the chagrin of my mother.

If you have been watching TV, opening your mail, or reading the paper, you probably have noticed that it is time for elections.  George W. Bush has called our house twice.  Yes, politics is on our radar screen.  Therefore, it is appropriate that the lectionary has led us to Jesus' famous statement about God and Caesar, about religion and politics.

How do religion and politics relate to each other?  Some believe they should be partners.   They say, the United States is a Christian nation and so our leaders should be Christians, or at least they should be part of the Judeo-Christian tradition.  Or, at least they should support it.   Muslims, Buddhists and people of no religion need not apply.  Then there are others who say, no, the Founders put up a wall of separation between religion and politics.  Keep your religion to yourself!  Yes, religion has its place, as long as it doesn't interfere with public life.  So, which is it?

I.  RELIGION AND POLITICS DON'T MIX

If you decide to go to the Bible to answer that question, you probably won't get a consistent answer.  The Old Testament is of no help.  There you will find theocracy and monarchy, neither of which fits well in modern America.  And the New Testament, well, it's not all that much help either.  Jesus lived in Roman occupied Palestine and Paul was a Roman citizen who benefited from his citizenship as he traveled throughout the Eastern Mediterranean region.  All that Paul says is, do what they say and you won't get in trouble.   Just follow Jesus and hope for the best, because the time is short and there is much to be done.

Jesus faced a different situation.  He wasn't a Roman citizen and most of his followers were Jewish peasants just like him.  Jesus knew well the burden of Roman occupation.  He understood why the people were restless and resentful.  Roman occupation was an insult to the God of Israel.   Of course, some Jews, like Herod, decided that it was in their best interests to accommodate the Romans.  Like the Nazi or Soviet puppet regimes of the past century, the elite lived pretty well off their Roman connections.   So, what better way to get Jesus into trouble than put him in a no-win situation.  Ask him about taxes?  Should we pay them or not?  If Jesus says yes, he's a traitor to his people.  If he says no, he's a traitor to Rome.  Either way he's in trouble.

And so, when the disciples of the Pharisees, who were religious purists, and the Herodians, who were political accomodationists, posed this question to Jesus, he evaded it by posing one to them.  That's the way he usually responded.  Give me a coin, he said.  Whose image is on it?  Caesar's of course, they answered.  Well, Jesus said, give to Caesar what is Caesar's, and to God that which is God's.  After that the questioners turned around and left, knowing that Jesus had slipped out of their noose again.

But what did Jesus mean?   Did he mean to suggest that God and Caesar are two equal but separate entities?  God on one side and Caesar on the other, each doing their own thing?  Did he mean that religion has to do with spiritual things and Caesar with political things?   Martin Luther read this passage and came up with his two kingdoms doctrine.  Government has its role and the church has its role, so when it comes to politics the church should stay out of  the way and the people should submit to the state.  That may have worked in the 16th century, but back in the 1930s it lead many German Lutherans to look the other way when Hitler did his thing.  How they asked, can we oppose the government?

There is another way to read this passage.  Maybe what Jesus meant to say was, to whom do you owe your allegiance?  Who is in charge?

III.  BEARING THE IMAGE OF GOD

Jesus evaded their question by asking them:  whose image is on the coin?  If it bears Caesar's image then it belongs to him.  But, what bears the image of God?   Is it a statue or a coin?  No, it's you and I.  God created us in God's image and so, if we give to God that which is God's, then that means we must give ourselves completely to God.  God and Caesar, they're not equals.  There aren't two kingdoms, there is only one, the kingdom of God.  So, when it comes to issues like politics and economics, it is important to remember that we owe our allegiance to God.  It's okay to take pride in your nation, to be patriotic, as long as you don't forget, that ultimately you belong to God.  God isn't an American and God doesn't just care about America.  America may be the only super power, but then so was Rome, at least for a while!

So, what should we do with this passage?

Let me give a few suggestions.

1)  Go vote on November 5th.  Give to Caesar what belongs to Caesar.  But when you vote, remember who you are.  Let your conscience, which is formed by your allegiance to God, guide you.  That doesn't mean you should vote for Christian candidates or people who claim they are Christians.  Luther was right, it's often better to live under a competent Turk than an incompetent Christian.  So, when you vote, be sure to consider the interests of others, not just your own.   For example, you may not have children in school, but since education benefits the whole of society, vote to build schools, pay teachers, provide books, and offer music education.  On questions of crime or war, ask your self, which position best reflects the views of Jesus?  Is going to war in Iraq the right thing to do?  Is the three strikes law just?  Is capital punishment cruel and unusual?  What would Jesus say?

2)  Put loyalty to God above loyalty to nation.  I know I've said this before, but I think we all need to hear it frequently.  Since God isn't an American, whatever blessings we as a nation have, then we must be responsible stewards and share it with others.

3)  Recognize the prophetic nature of the Christian faith.  Christians get in trouble when they get in bed with the rich and powerful.  When we align ourselves with specific political parties or systems we become beholden to them and we lose our ability to speak boldly when the need arises.  We need to be free to say to our government, this war or this law is unjust.  If political officials claim to be Christians and take positions that go against the gospel command to love one another, then we need to hold them accountable.

Of course this isn't easy, because we can easily fall into legalism.  And that isn't good!  But, we need to remember that in giving God that which is God's we must give ourselves completely to God!