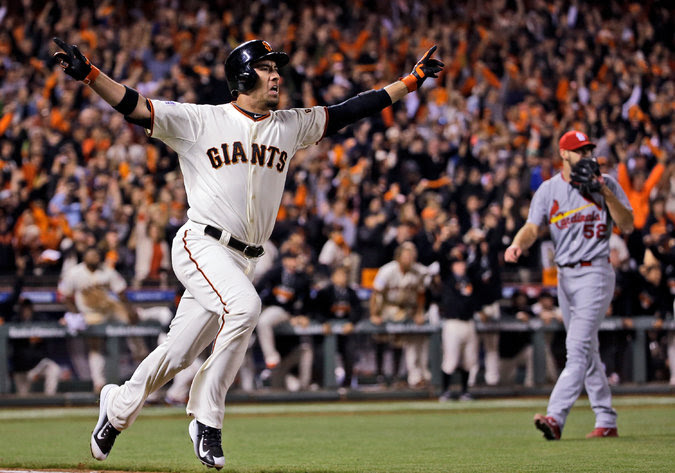 After last night's dramatic ending to a hard fought National League Championship Series -- the Giants won 4 games to one, but every game went down to the wire -- I decided I had to shift from religion and politics to my other passion -- the San Francisco Giants.  Yes, in memorable fashion - -like the 1951 Giants with Bobby Thomson's Shot Heard Around the World, an unexpected home run sent the Giants on to the World Series!

The Giants aren't a poor team, but they can't compete with the Dodgers and Yankees for the biggest names.  They have their stars, but during this post season it was the unsung heroes that stood out.  Think about Matt Duffy bunting or Yusmeiro Petit pitching six innings of relief in what became essentially a second game against the Nationals, and then coming back on Wednesday evening and shutting the door on the Cardinals when it looked as if things would get out of hand.  The Giants capitalized on mistakes by their opponents rather that (at least until last night) depending on the long ball. But even there it wasn't the expected bangers who stood out.  It wasn't Posey, Sandoval, or Pence who hit the big home runs.  It was little Joe Panik, a rusty Michael Morse, and a converted first-baseman/pinch hitter playing in left field who did the damage.

Baseball may not be the "National Pastime" as it once was, but this series against the Cardinals demonstrates the beauty of baseball.  It offered a picture of passion and determination, skill and desire. Unexpected players can rise to the occasion, like Joe Panik for the Giants or fellow rookie Kelton Wong of the Cardinals.

Now it's on to Kansas City where we will take on an equally unlikely opponent -- the other league's Wild Card, who are playing in their first World Series in twenty-nine years.  I feel their pain and desire.  After all, it was twenty-seven years between the 1962 World Series, when the Giants lost a heart-breaker to the Yankees (I was four and do not remember the game), and the 1989 series against the A's, a series marked by a major earthquake.  I got to go to the make up game.  And it wasn't until four years ago -- 2010 -- that I got to see the team I've supported all my life win the Championship.  Now, were' back for a third championship in five years.