The Chosen Few -- Lectionary Reflection for Pentecost 18A 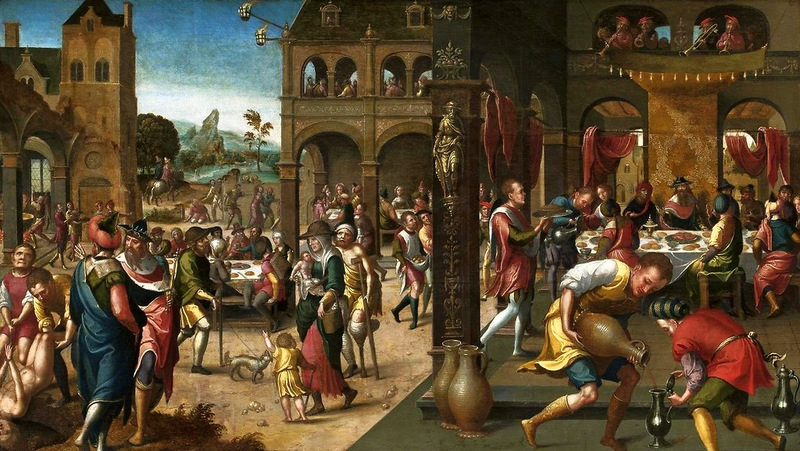 “The kingdom of heaven may be compared to a king who gave a wedding banquet for his son. 3 He sent his slaves to call those who had been invited to the wedding banquet, but they would not come. 4 Again he sent other slaves, saying, ‘Tell those who have been invited: Look, I have prepared my dinner, my oxen and my fat calves have been slaughtered, and everything is ready; come to the wedding banquet.’ 5 But they made light of it and went away, one to his farm, another to his business, 6 while the rest seized his slaves, mistreated them, and killed them. 7 The king was enraged. He sent his troops, destroyed those murderers, and burned their city. 8 Then he said to his slaves, ‘The wedding is ready, but those invited were not worthy. 9 Go therefore into the main streets, and invite everyone you find to the wedding banquet.’ 10 Those slaves went out into the streets and gathered all whom they found, both good and bad; so the wedding hall was filled with guests.

11 “But when the king came in to see the guests, he noticed a man there who was not wearing a wedding robe, 12 and he said to him, ‘Friend, how did you get in here without a wedding robe?’ And he was speechless. 13 Then the king said to the attendants, ‘Bind him hand and foot, and throw him into the outer darkness, where there will be weeping and gnashing of teeth.’ 14 For many are called, but few are chosen.”

Wedding receptions these days are getting increasingly elaborate and expensive.  Many couples first book the reception hall and then go looking for a church or chapel (and accompanying officiant) to fit their reception date. Of course with such affairs, you have to be selective in whom you invite. And if someone somehow manages to slip in uninvited, that person probably will be quickly disinvited (cast out).

As Jesus once again tells a parable of the kingdom, he compares it to a wedding banquet thrown by the king for his son. The king sends out invitations, but everyone invited rejects the offer. Now when the king sends an invite, you had better have a good reason for saying no.  Thinking that they might not understand how great a celebration this is, he sends out another invite, this time detailing the menu (including the fatted calf). Again the invitees refuse the invitation, but this time things escalate. Not only do they refuse to come, but they also mock the invitation and therefore the king and his son.  Some of them return home or to work, to that which they believe is more important than the son’s wedding. But some of those invited go even further and mistreat and even kill the messengers. The response here parallels that described in the previous parable of the landowner and those tending the vineyard (Matthew 21:33-46). Who might the messengers be?  Could it be that Jesus has the prophets of old – along with John the Baptist in mind? After all, the prophets rarely were received with gladness.

What comes next should be disturbing.  As Jesus tells it, the king (God?) is so enraged by the way his servants are treated in the rejection of the invitation, that he sends in the troops to burn the city and annihilate the offenders.  This is a scorched earth policy. Now, the refusal to come, along with the treatment of the king’s servants would be seen as an act of treason.  Treason, of course, can’t be left unpunished.  As is often true in warfare, punishment is meted out indiscriminately.  That is, everyone in the village suffers and dies.  That was true then and is often true today.  We know of the massacres inflicted on offending peoples by the likes of Bashar al-Assad or a Saddam Hussein, but our side has its share of such offenses as well. We often refer to this as collateral damage.

The point here, according to Jesus, is that those invited have shown themselves to be unworthy of even living, and therefore deserving punishment. For those of us who insist that Jesus preaches a gospel of love, this parable poses problems. It describes divine wrath and judgment. This isn’t “Old Testament” stuff; this isn’t even Revelation. This is Jesus telling parables of the Kingdom and judgment stands at the center of the story. So, what do we make of this?  How do we make sense of a gospel of grace and mercy and a message of judgment with punishment?

It is quite likely that standing behind the parable is the destruction of Jerusalem – early Christians did see the fall of Jerusalem as a sign of judgment on the city for its rejection of Jesus.  Matthew writes this gospel after the destruction of Jerusalem. The readers would know the story and they would know how Jesus had been treated in Jerusalem. Surely this is appropriate justice – that the city Jesus came to redeem but which rejected message violently now lies in ruins. Now a new cohort has entered the kingdom – by way of the son.

The wedding feast is ready to be served, and there must be guests. Since those originally invited (the religious/political elite) had chosen not to come, the king looks elsewhere. The servants go into the streets, compelling all they meet, both good and bad, to come and enjoy the feast. The king wants a full hall, and the servants make sure this happens – especially so that there is no room at the table for those who might decide that since there’s nothing better to do, they’ll attend after all.  But are these folks whom the servants bring to the banquet?  In Luke’s version, it’s the poor, the crippled, the lame, and the blind. Those first invited would appear to be the leading citizens (the 1%), but when they refuse to come, the king turns to those living on the margins. It should be remembered that by and large those who responded to Jesus and the early Christian message stood on the margins, not at the center of society (Luke 14:15-24). By the time that the wedding feast (a symbol of God’s realm) began, the hall was filled. Every seat was taken.  It’s time to party!

As we read a parable like this, with its strong message of judgment, we need to keep a few things in mind. First, it is good to remember that judgment is part of the gospel message. Jesus preaches a message of love, but he also outlines the consequences of rejecting that message. Despite what we would like to believe, Jesus didn’t always offer a warm and fuzzy message. Now, how that judgment is meted out is open to interpretation, but it’s clearly there in the story.  There is in this parable, and others like it, an eschatological element suggesting future judgment. Indeed, we will see more of this going forward. We needn’t be comfortable with it to recognize that love and judgment are both parts of God’s identity.

The second element has to do with the tendency to read statements like this in an anti-Semitic or anti-Jewish manner. That is, many read a passage like this and assume that Jesus is pronouncing judgment on the Jewish people, who are now replaced as God’s chosen by Christians (Gentile Christians at that). This has proven dangerous, as seen in the many pogroms and the holocaust. Yes, Jesus pronounced judgment on a certain sector of Jewish society – the elite that had chosen to collaborate with the Romans against their own people.

As we wrestle with the implications of the parable, we need to stop and attend to the presence of the uninvited guest. There is a man in the crowd who doesn’t have a wedding robe. It appears he has crashed the party, and the king has discovered his presence.  When he can’t answer as to why he doesn’t have his robe (no name tag), he is bound up and cast into “outer darkness, where there will be weeping and gnashing of teeth.” Who is this uninvited guest and why is he treated in such a manner?  Wouldn’t it be better and more gracious for the king to find a robe for the man?  Or is this man one of those who had originally refused the offer and then had decided that since there was nothing better to do at the moment to come anyway? Could it be that the one who is without the wedding robe didn’t think much of the offer, and so didn’t choose to dress for the occasion? As Sally Brown notes, this invitation is scandalously broad, so there are only two ways of being excluded:

[E]ither you disregarded the invitation completely; or you imagined an invitation this broad could not be worth much, so you stumbled in still dressed for the gym, in case the party was a bore. [Feasting on the Gospels--Matthew, Volume 2: A Feasting on the Word Commentary,

We live at a time where casual is the norm. We don’t dress up for church.  I’ve officiated at funerals, where family and friends come dressed in sweats. No longer is black necessary, just come as you are and hope there’s a nice reception afterward.  The message here could be one of how we treat holy occasions in our lives. And are there consequences for dishonoring those occasions?


The parable closes with a trenchant comment or summary statement.  “Many are called, but few are chosen.” What does it mean to be chosen, to be one of the Elect? In the Hebrew Bible, God chooses a people – through Abraham and Sarah. God makes a covenant and declares that through them and their descendants the nations would be blessed (Genesis 12:1-3). In calling the disciples, Jesus chooses a company of followers to whom he will give a commission (Matthew28:19-20).

For those, like me, who tend toward a universalist perspective, it is clear that Jesus assumes that there are those in the kingdom and those outside the kingdom? There are fewer inside the kingdom than outside. Perhaps Jesus  (and Matthew) have in mind the minority status of the Christian community in an empire that brooks no opposition, especially that which proclaims a kingdom not of its own making. Whatever humanity’s ultimate fate, to enjoy the full blessings of God’s realm, now is the time of choosing whether to accept the invite or not?  Choosing not to accept, appears to have consequences.  Accepting the invitation brings blessings.