The Lord Was With Him -- Sermon for Pentecost 6B 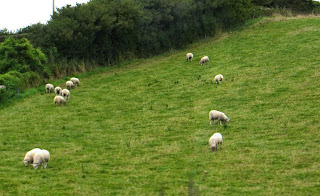 Life is messy, and as people of faith, we try to make sense of this messiness by seeking God’s guidance and wisdom. When we come to share in worship, we give thanks to God for being present with us through life’s ups and downs. Even when we’re not sure how God is present, we know in our hearts that God is with us. This may be the 4th of July weekend, but the message of Christmas in July is that Emmanuel – God with us – has come in the person of Jesus, so that we might experience that presence anew.

Our journey through 1 and 2 Samuel had brought us to a turning point in the history of Israel. The civil war that had engulfed David’s supporters and those who had gathered around Saul’s son Ishbotheth, had come to an end, and David was the last man standing.  The elders of Israel gathered at Hebron, and anointed David as their shepherd and ruler.  As Eugene Peterson puts it: “The shepherd boy of Bethlehem becomes the shepherd king of Israel.”   [Leap Over a Wall : Earthy Spirituality for Everyday Christians,

p. 141]. It is this shepherd king who is inextricably linked to the most beloved of the Psalms.

Peterson writes this of David, in light of the 23rd Psalm:

Every image in this psalm – which is to say, every aspect of David’s life – is God-defined, God-saturated. Everything that David knows about God he experiences – enters into, embraces, takes into himself. God isn’t a doctrine he talks about but a person by whom he is led and cared for. God isn’t a remote abstraction that distances him from the conditions of his actual life but an intimate presence who confirms his daily life as the very stuff of salvation. What he experiences in God doesn’t merely change but matures. [p. 141].

David’s reign begins in Hebron, but he quickly realizes he needs a new capital, one that isn’t connected to his tribe or that of his former foes. Our reading this morning tells us how David captured the Jebusite fortress of Jerusalem, which until then had been a neutral site, and made it his new capital, and “David became greater and greater, for the Lord, the God of Hosts, was with him.”

There is a word that describes the work of God in the world. That word is providence. It’s a very powerful word. It can even be a very dangerous word. Down through history rulers have appealed to God’s providence as support for their actions. In the Declaration of Independence, Thomas Jefferson appealed to “nature’s God” in support of the American Revolution. Nearly a century earlier, at the time of Britain’s Glorious Revolution, many supporters of William and Mary in their invasion that drove out King James II, appealed to divine providence.

Supporters of that “Revolution” pointed to the smoothness of the change of government and suggested that God’s hand was involved. This was especially important for those who believed that England’s monarchs ruled by divine right. Only God could change things, and it appeared to many that God had intervened. One of those supporters, Gilbert Burnet, the Bishop of Salisbury, wrote: “with relation to King James, and all the right that was before vested in him, he was, as they thought, a conqueror. By this notion they explained those passages of scripture, that speak of God’s disposing of kingdoms and pulling down and setting up another” (William Gibson, Religion and Society in England and Wales: 1689-1800, p. 23-24). Even as God did for William and Mary, God had done for David, for God was with him in his struggle with his foes.

On this Fourth of July Weekend, where do you see God at work? How does God’s providence or governance fit into your world view?  That is, even if God doesn’t pull every string in your life, how is God present and active? How is God still speaking?  How is God the shepherd who sets the table for you in the midst of your enemies and bathes your head with oil and fills your cup so it spills over?

Yes, goodness and faithful love will pursue me all the days of my life,
and I will live in the Lord’s house as long as I live. (Psalm 23:6 CEB)

To whom do you look to be your guide and deliverer?  Do you live with the assurance that God, the Good Shepherd, who walked with David as he matured into a shepherd king, is truly with you in every moment of life?

Magdalen said…
I happened to stumble on this today in a search for "God's delight"!
Robt Cornwall: " You can see where the idea of going to Jesus
through his mother derives from. Sons
can’t say no to their mothers!"
My comment: Indeed, and so it still is with Jesus today, since God is the same yesterday, today and always; we can have no fear of asking intercession from/through Mary, the Gebirah (Kings 2:20, where Solomon said to his Mother Bathsheba, seated on a throne at his
right: "Make your request, Mother, for I will not refuse you.") Here is a sort of
type of Our Lady.
At the scene at Cana, she also says, "Do whatever He tells you." Proper devotion to Jesus' mother takes nothing away from Him. He loves her more than we every could. She always leads us closer to Him. As you might be able to tell from the above, I'm Catholic, delightedly so.
2:54 PM