Bread of Life Available Today -- Lectionary Reflection for Pentecost 10B 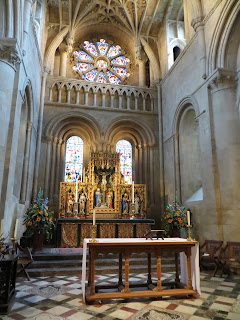 24 So when the crowd saw that neither Jesus nor his disciples were there, they themselves got into the boats and went to Capernaum looking for Jesus.

25 When they found him on the other side of the sea, they said to him, “Rabbi, when did you come here?” 26 Jesus answered them, “Very truly, I tell you, you are looking for me, not because you saw signs, but because you ate your fill of the loaves. 27 Do not work for the food that perishes, but for the food that endures for eternal life, which the Son of Man will give you. For it is on him that God the Father has set his seal.” 28 Then they said to him, “What must we do to perform the works of God?” 29 Jesus answered them, “This is the work of God, that you believe in him whom he has sent.” 30 So they said to him, “What sign are you going to give us then, so that we may see it and believe you? What work are you performing? 31 Our ancestors ate the manna in the wilderness; as it is written, ‘He gave them bread from heaven to eat.’” 32 Then Jesus said to them, “Very truly, I tell you, it was not Moses who gave you the bread from heaven, but it is my Father who gives you the true bread from heaven. 33 For the bread of God is that which[a] comes down from heaven and gives life to the world.” 34 They said to him, “Sir, give us this bread always.”

My preferred words for sharing the bread and cup at communion are these: “The Bread of Life” and “The Cup of Salvation.” I use them rather than the more traditional Body and Blood of Christ. I’m not quite sure why I chose to embrace this alternative, but I have found them to be more expansive than the traditional words.

The people whom Jesus fed (the 5000) are hungry once again. Since Jesus had fed them the day before, why not today? It is important to note that Jesus had crossed the lake in the night so this group decided to get into boats themselves and find him. When they do find him they go back to the original question—what sign are you going to give to get our allegiance. Jesus, of course, sees through the ruse. They really don’t want a sign. They want bread. Bread was the staple of life. The Romans understood this, so they used bread and circuses to distract the people, allowing them to essentially do as they pleased. When the crowds began to demand more liberty, they offered more bread. It was simple and relatively cheap (at least it was cheaper than expanding the military).

As is often the case in John, Jesus turns the physical into the spiritual. They want bread—like the bread Moses provided in the wilderness (though truth be told the people got tired of manna and asked for an expanded menu)—but Jesus had another kind of bread in mind. He told the people that it wasn’t Moses who gave the people bread, it was God. Now God would offer them bread, just a different kind of bread—the bread of life. That promise leads to another request: show us the bread. Jesus answers: “I am the bread of life.” If you read further in to John 6 you will find a rather graphic conversation about eating the body of Christ and drinking his blood. It is a conversation that led to the concept of the Eucharist being an “unbloody sacrifice.” That is, it served the purpose of a sacrifice to propitiate God, but didn’t require blood, just the consecration of the bread and cup.  To go further here is to extend ourselves beyond what the lectionary creators deemed necessary for this conversation.

The passage itself poses some challenges to us, especially for those of us who see the church as the Body of Christ have social responsibilities. There is the potential here to use this passage along with 2 Thessalonians 3:10 and its warning to those who were idle and refused to work—that they shouldn’t eat—as a cudgel against the poor and needy. At the same time Jesus could be accused of promising the people heaven so as to distract them from their hunger (opiate of the people). It’s a tricky passage for it moves us from physical hunger to spiritual hunger. At these points, perhaps we are best served, for a moment anyway, by avoiding these traps and focusing on spiritual hunger and Jesus’ desire to address it.

With this in mind let us return to the Eucharistic interpretation of this passage. It seems clear to many that John 6 offers us John’s understanding of the Eucharist (remember he lacks the words of institution at the Last Supper). John Johnson, an 18th century high church Anglican theologian who wrote exhaustively on the topic of the “unbloody sacrifice,” makes an interesting point when he suggests that Jesus wouldn’t have introduced such a “solemn and mysterious” institution at the Last Supper if he hadn’t already prepared the Disciples beforehand. That beforehand was here in John 6. He suggests that John felt it necessary to add this lengthy discourse (John 6) because the other writers had omitted it. Johnson goes on to say that to “secure a happy resurrection, He directs us to feed on the Bread of Life, the Holy Eucharist: for by, making this a necessary condition without which we cannot attain immortal happiness, he gives us a demonstration that eternal life is the gift of God, and not the wages of righteousness or obedience” [John Johnson, “The Unbloody Sacrifice,” The Theological Works of the Rev. John Johnson, M.A. (Oxford 1847), 1:515-516; 2:135].

What then does it mean for Jesus to be the bread of life? What does it mean to feed on this bread so that we no longer hunger or thirst (the cup).  I think that Johnson may have been on to something by suggesting that Jesus would have prepared his disciples for the meal he instituted that last evening of his earthly life. I think John 6 offers us one of those moments of preparation. I think there are others, which would include his own table fellowship. Johnson placed great value on the Eucharist. He saw it being holy and needed to be treated reverentially. There were proper procedures and elements, which he traced back to the early centuries of the church (the group of people he was involved with extended the authoritative period of theological development into the fifth century). Scripture might have final authority, but where Scripture was silent Tradition was allowed to fill in the gaps. Tradition offers us an authorized interpretation of Scripture that teases out those important points that we might miss—like seeing the Eucharistic elements of John 6 [Robert Cornwall, Visible and Apostolic: The Constitution of the Church in High Church Anglican and Nonjuror Thought, (University of Delaware Press, 1993), pp. 50-54].

As we gather to hear this word from John 6, especially if we’re gathering at the Table (my tradition gathers weekly at the Table—if not more often), then this lectionary passage offers us the opportunity to explore and meditate on the meaning of the Eucharist.  The passage offers us the opportunity to ask how these seemingly bare elements—just common food and drink—can communicate us the life-giving presence of Jesus. If we read John 6 in a Eucharistic manner, does this help us move beyond seeing the Lord’s Supper as merely a memorial of a man who died long ago in a land far, far away? That is, when you take these elements of bread and wine/juiced do you understand yourself encountering the Risen Christ? When you take these elements into your body physically do you also understand yourselves partaking of the benefits accrued through the cross?  Indeed, how might this passage deepen one’s experience of the Table? Indeed, how might Jesus satisfy one’s spiritual hunger and thirst at the Table?
Email Post
Labels: Bread of Life Eucharist Gospel of John Jesus John 6 John Johnson Lectionary Lord's Table Reflections Unbloody Sacrifice