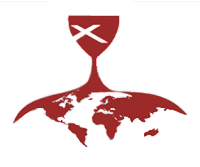 My Disciples ministerial colleague Brian Morse responded to my posting from yesterday by arguing for the importance of eschatology to the Disciples theological vision. I would agree whole-heartedly with Brian's assessment.  In fact, I devote one of the chapters of my upcoming book with Wipf and Stock Publishers -- Freedom in Covenant -- on this very topic. It is good to remember that Alexander Campbell titled his influential journal the Millennial Harbinger. For his part, Alexander Campbell was a Postmillennialist who took an optimistic view of the future. It seemed as if Protestant Christianity was on the move, with America at the forefront of the missionary movement that was spreading across the world (often on the coattails of European empire builders). Be that as it may, the point is -- Disciples had eschatological visions, even if not all were in agreement as to that vision.

The late Disciples historian Tony Dunnavant argued in an article published in the Lexington Theological Quarterly some years ago that the Disciples were not simply concerned with restorationism and unity, but that it was a movement with an important, but oft neglected eschatological vision.

"The Disciples movement was not, in the ultimate aim of its original vision, a restoration movement. Nor was it, in the final goal of that vision, a Christian unity movement. Rather, it was a movement that understood itself in eschatological terms as one of God's instruments for the evangelization of the world. Christian eschatology and a passion for evangelization are elements of enduring validity and potentially empowering significance for Disciples. Ironically, they have often been the lost link in the recent and contemporary memory of the Disciples tradition. It is a link worth recovering." [Evangelization and Eschatology: Lost Link in the Disciples Tradition? LTS Quarterly,(Spring 1993) 51.]

Disciples rarely talk about eschatology, perhaps because it is so often linked to dispensationalist visions, especially those that appear in best-selling novels. Eschatology, however, is essential for it points us forward into the future. It is a link worth recovering, for as Tony notes: "An eschatological worldview assumes that God continues to be active in the world, pulling God's people toward that future which God intends for them and for all creation. As sense of being a part of God's work in the world, with a missional vocation of global significance, was energizing to Disciples of an earlier age" [Dunnavant, LTSQ, p. 50]

When we talk about the reign of God or the realm of God/Kingdom of God we are talking in eschatological terms. To engage in missional work is to engage in eschatological work, for it is future oriented and not simply focused on the past (nostalgia). Are we ready to reclaim this lost link as we pursue God's future for the church and the world?
Email Post
Labels: Disciples Identity Disciples of Christ Eschatology Evangelism Mission Missional Tony Dunnavant