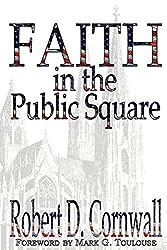 Tomorrow is the 4th of July (Independence Day). Many Americans will be celebrating with parades, picnics, and fireworks displays (oh how noisy the neighborhood will be tomorrow evening once the sun goes down). But what does it mean to be free? What responsibilities do we who are have for that freedom? Since many will be doing something other than reading my blog tomorrow, I wanted to share this excerpt from my book Faith in the Public Square: Living Faithfully in 21st Century America

Every year, on the fourth day of July, Independence Day makes itself felt in the United States. It is a reminder that the United States was founded on the principles of liberty and happiness for all – at least in theory. In point of fact, we’ve not always lived up to our ideals, but in principle we are a people committed to equal justice and opportunity. These commitments are enshrined in the words of our founding documents. The Declaration of Independence insists that “Governments are instituted among Men, deriving their just powers from the consent of the governed.”

These freedoms have at times been abridged and set aside in the name of security or the defense of the nation, and often we’ve come to regret those decisions. Living as we do at a time when the government has taken steps to limit certain civil rights and freedoms, questions have been raised about the usefulness and constitutionality of these actions. Threatened from outside, or so we believe, we’ve allowed at least some of our freedoms to erode. The Declaration of Independence insists that the government serves at the pleasure of the people, but at times the executive branch has taken on imperial tendencies – though the degree to which this is true may depend on who is President of the United States. (When I first wrote this essay for the Lompoc Record George W. Bush was President and I was less tolerant of his efforts to expand executive power than perhaps I am today when I’m more in tune with the person who is currently holding that office.) But, it’s worth considering the implications of an expansion of power undertaken in the name of security. How much is too much? What liberties are being lost and will we be able to reclaim them once their gone?

Consider for a moment the claim made by our former President that he had the authority to designate citizens and foreign nationals as “enemy combatants,” thereby placing them beyond normal constitutional protections (President Obama has not really backed off this claim either). I agree with John Whitehead of the Rutherford Institute that this is possibly a dangerous and unconstitutional act.

In a world where the president has the power to label anyone, whether a citizen or permanent resident, an enemy combatant and detain that person indefinitely without trial, no liberty exists and everyone is potentially an ‘enemy combatant’.

This isn’t a matter of partisan politics (from what I know of John Whitehead – he’s a conservative); it’s about protecting our liberties as a people – no matter who the President is. The problem is that the then President seemed especially concerned with claiming power for himself, and again the current President has not let go of these prerogatives.

Now, to claim that we are a free people doesn’t mean that there are no limits to our freedoms – for instance I’m not sure if the Second Amendment really does allow anyone and everyone to walk around with an automatic weapon. The constitutional question concerns how limits are constructed and imposed.

While the Constitution and not the Declaration of Independence defines the nature of our government, the Declaration does suggest that that “we the people” – not the Executive, Congress, or the Courts – ultimately decide what the government should look like. One of the principles that the both the Constitution and the Declaration of Independence established was that government is accountable to the people. Thus, the nation’s rules and regulations that are imposed by government should protect not the elite but the people as a whole. Thus, traffic and environmental laws and bans on smoking in public buildings are appropriate because they protect and serve the common good.

To temper our desire for freedom as well as give some religious input, it’s appropriate to consider the words of St. Paul who suggested that while freedom is great, it’s not always beneficial (1 Corinthians 1 0:23). Anarchy is freedom, but it usually ends with chaos and destruction. Because we often think of freedom in individualistic terms – “I can do what I want, when I want” – we often forget how our lives intersect. As Rabbi Jonathan Sacks writes: “With freedom is born responsibility.” And this goes both ways – without freedom we can’t be held responsible and without a sense of responsibility freedom leads to unfortunate ends – if not for me then for my neighbor.

When I think of the freedoms guaranteed by the Constitution, I think of my right to speak my mind, publish my thoughts, worship as I please, assemble when and where I wish, and petition the governing authorities. These First Amendment rights should be treasured and protected, but even here there are limits, for I must remember that my freedoms must be balanced by those of my neighbor. This concern for the needs of the other brings us back to the overarching principle enshrined in the commandment to love one’s neighbor as one’s self. Whether self-imposed or not, limits must be motivated by a concern for the common good.

Our Founders understood the need for checks and balances.Although they were, in general, optimistic people who trusted the People to make wise decisions, they also understood the ever present potential for the powerful to abuse the power entrusted to them. This was why they preferred decentralized government. I’m no “Tea-Partier” and I do believe in a robust Federal Government, but when power is entrusted to the hands of a few, whether government or corporate hands, it would be appropriate to
remember our calling to balance freedom and responsibility – even on the Fourth of July!


Faith in the Public Square