Served on a Platter - Lectionary Reflection for Pentecost 7B 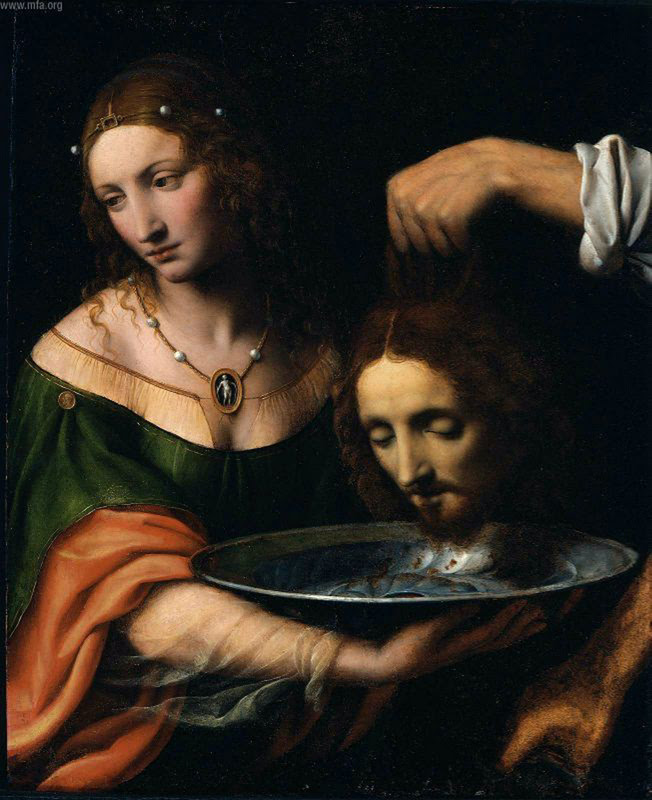 14 King Herod heard of it, for Jesus’ name had become known. Some were saying, “John the baptizer has been raised from the dead; and for this reason these powers are at work in him.” 15 But others said, “It is Elijah.” And others said, “It is a prophet, like one of the prophets of old.” 16 But when Herod heard of it, he said, “John, whom I beheaded, has been raised.”

17 For Herod himself had sent men who arrested John, bound him, and put him in prison on account of Herodias, his brother Philip’s wife, because Herod had married her. 18 For John had been telling Herod, “It is not lawful for you to have your brother’s wife.” 19 And Herodias had a grudge against him, and wanted to kill him. But she could not, 20 for Herod feared John, knowing that he was a righteous and holy man, and he protected him. When he heard him, he was greatly perplexed; and yet he liked to listen to him.21 But an opportunity came when Herod on his birthday gave a banquet for his courtiers and officers and for the leaders of Galilee. 22 When his daughter Herodias came in and danced, she pleased Herod and his guests; and the king said to the girl, “Ask me for whatever you wish, and I will give it.” 23 And he solemnly swore to her, “Whatever you ask me, I will give you, even half of my kingdom.” 24 She went out and said to her mother, “What should I ask for?” She replied, “The head of John the baptizer.”25 Immediately she rushed back to the king and requested, “I want you to give me at once the head of John the Baptist on a platter.” 26 The king was deeply grieved; yet out of regard for his oaths and for the guests, he did not want to refuse her. 27 Immediately the king sent a soldier of the guard with orders to bring John’s head. He went and beheaded him in the prison, 28 brought his head on a platter, and gave it to the girl. Then the girl gave it to her mother. 29 When his disciples heard about it, they came and took his body, and laid it in a tomb.

Birthday parties can sometimes prove disastrous. Exhibit one is the party Herod Antipas threw for himself. He decided to invite all his friends over for a little get-together. They had food and wine galore. Then came the entertainment—provided by Antipas’ step-daughter/niece Salome. She danced the night away and it so excited Antipas that in his drunken stupor, he promised her anything she wanted, even half his kingdom. This is a scene that has stirred the imagination for centuries, inspiring artists and film-makers and authors. The focus has always been on the relationship of intrigue and sex. The assumption, whether true or not, is that Salome offered a rather seductive dance that played on her step-father/uncle’s lust.  It’s not surprising that this has been the focus of so many interpreters, but is this the focus of Mark?

This reading from Mark 6 can be a challenging passage to preach, though I have preached on the text. We might even wonder why Mark chose to include this episode in his story of Jesus, after all Jesus is not a major character in this passage (or is he?). What do you say about Antipas and the party that led to the demise of John the Baptist? The passage itself takes the form of a flashback. Herod Antipas, the erstwhile ruler of the region of Galilee (he’s a tetrarch who wants to be called king), wants respect. When his father (Herod the Great) died, he got a quarter of his father’s realm. He wants power, but his power is limited by his Roman overlords. As for his wife, who is also the wife of his brother Philip, she would like to see her station lifted as well. Into this mix stepped the prophet John the Baptizer, who had a penchant (as prophets were known to do) for “speaking truth to power.” He got himself jailed because he had a habit of calling attention to Herod’s relationship with Herodias. Herodias didn’t appreciate being chastised by this uncouth ascetic dressed in animal skins.

John has had many imitators over time, some who were more fortunate than others. There are parallels between John’s relationship with Herod and that of Thomas Ken (author of the doxology) and Charles II. The only difference is that Ken’s rebukes of the king for his dalliances with the famed actress Nell Gwynn didn’t get him executed. Instead he got a bishopric.

What we see in this story isn’t really a birthday dance gone horribly wrong (though that’s present here). After all, what can you say about the rather grotesque request of a young girl (at her mother’s behest) for the head of the prophet on a platter? And yet, there it is – the story of a dance that led to the beheading of one whom Herod both feared and revered. There’s nothing scarier to a despot than a person of impeccable morals. Rulers like Antipas always had this sense of anxiety about their position. Herod was insecure about his position. He had to report to Rome, which held all the cards, even has his wife is causing him headaches. He loves her, but by taking her into his home he has enabled his enemies to stir up trouble.

Herod is a man of power, and as a man of power, he has authority to bend the rules. He thinks he can get away with marrying his niece/sister-in-law. After all, if the rulers are the law, then who can hold them accountable? One of the judgments placed on the ancient kings of Judah and Israel is that they “did what was right in their own eyes.” With very few exceptions these monarchs tended to be corrupt. If you make the rules then you are above the rules. Or as Lord Acton famously said—“power corrupts, absolute power corrupts absolutely.” Antipas didn’t have absolute power, but he wanted to act as if he did. However, Herod also knew that he was skating on thin ice. He ruled over a restive populace that honored John’s apparent holiness and irreproachability. He also reported to a Roman emperor who wanted his underlings to keep the peace. So, you can understand why a person like Antipas might be both suspicious of those around him, who might be waiting to pounce, and anxious about his future. But Herod isn’t all bad. He wants to keep John around in part because he fears him, but he also seems to know that there is this holiness about John that he finds appealing. John is one of the few people willing to keep him accountable, and he appreciates that in John.

Nonetheless, John was a problem. He was afraid of not getting rid of him and of keeping him alive. He simply couldn’t decide what to do. Herodias, however, knew what needed to be done. As long as John lived he would be calling attention to her situation. Knowing her husband’s tendencies, she decided to use her daughter to get what she wanted. It may have been against his better judgment, but once he made his promise he couldn’t pull it back. And so he had John’s head delivered to Salome on a platter. John’s ministry had come to an end. He was no longer a threat, except that Herod begins hearing reports about this young preacher wandering about Galilee. So who is he? Could he be John risen from the dead? If it is John, that doesn’t bode well for Antipas. If nothing else the people would see this as a sign of divine judgment on Antipas.

Of course Jesus isn’t John resurrected. They are both prophetic figures, but their ministries are different. Their styles are different. But Mark wants us to know that the two are connected. Both John and Jesus represent God’s presence in the world.

As noted earlier, this is a flashback episode. Herod is trying to make sense of Jesus. Wondering if there’s a connection, he becomes convinced that this is John risen from the dead. What is perhaps important to note in this passage is the mention of resurrection. This is the first time resurrection is mentioned in the Gospel of Mark. Resurrection was an increasingly popular view among the Jewish people, though it hadn’t been the dominant belief in earlier centuries. The most common belief was that the goal was a long and fruitful life, in which one left a legacy through one’s offspring. There was, however, a growing acceptance of the idea of resurrection that helped make sense of lives cut short, especially holy lives, like John’s. As William Placher notes, “resurrection hope arose in the context of belief in God’s justice. Some good people, faithful Jews, did not lead long and happy lives. They suffered and died young, and they might not have any descendants at all. Such stories seemed even more common in the tragic years of Israel’s exile and subjugation. If God is just, then death cannot be the end of these people’s stories” [Placher, Mark, p. 92].

For Herod then, resurrection is a sign of judgment on himself. It is a reminder that God is just and that God will redeem God’s people, especially when they suffer from injustice. Ultimately Herod’s struggle is not with John, but with God. Jesus’ presence seems to confirm Herod’s deepest fears. The question then is—what does this say to us about our place in God’s world?

Note on image:  Luini, Bernardino, 1475?-1533?. Salome with the Head of John the Baptist, from Art in the Christian Tradition, a project of the Vanderbilt Divinity Library, Nashville, TN. http://diglib.library.vanderbilt.edu/act-imagelink.pl?RC=50502 [retrieved July 7, 2015]. Original source: http://www.mfa.org/.