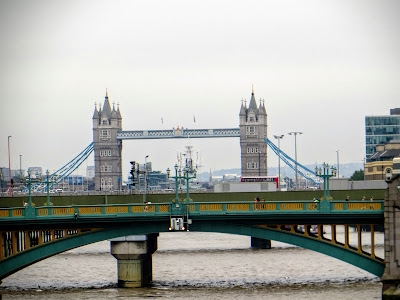 You might have heard that Pope Francis and Donald Trump have gotten in a bit of a tussle. Or, rather, the Pope raised questions about whether building walls is Christian. Trump took offense and in true style fired back. I'm going to leave that conversation to others to decipher. My sense is that the Pope's statement has been misinterpreted.  It's the policy not the person that he is addressing, though policies do emerge from a person's vision of themselves and of the world. Since Mr. Trump has made exclusion, deportation, and wall building the center of his campaign, we might want to ask whether his perspective is in keeping with Jesus' call to love one's neighbor.

I appreciated hearing John Kasich's response to the kerfuffle. He suggested there are too many walls and not enough bridges being built.  I think the GOP candidate has put his finger on something important.

We live at a time when more walls than bridges are being built (and if you've seen the physical bridges that exist in the United States, you know that even the bridges we have are in disrepair!). I won't pretend to have been entirely successful, but I have tried to be more a bridge builder than a wall builder in life. Ultimately bridges are more satisfying than walls, for they bring people together rather than separate them.

There is a powerful image present in the Ephesian letter, where the author (traditionally Paul) speaks of Christ being the bridge between Jew and Gentile.

For he is our peace; in his flesh he has made both groups into one and has broken down the dividing wall, that is, the hostility between us. (Ephesians 2:14).

I remember the powerful images that streamed across the television screen as the Berlin Wall was first breached and then came down. A city that had been divided for nearly a half a century was no more. I think this is a better vision for our country and our world. America is changing. It's more diverse than ever. There is no going back to what was!

So, I think we have an infrastructure challenge, but it's not a wall. It's a bridge that needs to be built!
Bridge-building Dividing Walls Donald Trump Ephesians John Kasich Multi-ethnic America. politics Pope Francis