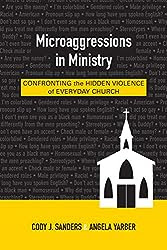 There are books you would like to set aside—permanently—but know you shouldn't. This is one of those books. The reason I say this is that we don’t like to think of ourselves hurting others, intentionally or unintentionally. When it is brought to our attention that we may have offended or someone, it’s easy to become defensive. I know, I’ve been there. Sometimes what we think is inconsequential behavior or teasing, can be rather hurtful. Again, I’ve been on both sides of the ledger. It’s no longer appropriate to be overtly bigoted, but that doesn’t mean that subtle bigotry, and sometimes less than subtle, isn’t out there.

I had never heard of microaggression until this particular book, authored by Cody Sanders and Angela Yarber, showed up in the mail. I picked it up and read a few pages and then set it aside, moving on to other books. Finally, I decided I had better read it and discovered a rather powerful book. My eyes were opened to the presence of numerous microaggressions happening all around me. I recognized it occurring on Facebook and Twitter. I saw it occurring in the church. I discerned it in my own life. Often these microaggressions were unintentional, but they affected the lives of others.

The authors of this important book are Cody Sanders, who is pastor of Old Cambridge Baptist Church in Cambridge, Massachusetts.  He holds a Ph.D. in pastoral theology and counseling from Brite Divinity School. By self-declaration he is a gay man. His co-author is Angela Yarber, who holds a Ph.D. from the Graduate Theological Union and has being teaching at seminaries since 2006. By self-description she is a Queer woman. Both authors have been targets of microaggressions. They both love the church and have major problems with the church as it stands. There hope is that we, the readers, will take to heart what we learn from the book.

We hear a lot about racism, sexism, heterosexism. On a macro level, most of us avoid exhibiting language and behavior that overtly appears to be bigoted. I often hear complaints about political correctness, but most of the time there’s good reason for opposing such behaviors. Now, we would love to believe that bigotry has been relegated to the dustbin of the past, but many of us know better. If you aren't convinced that bigotry continues to exist, check out the comments section on a magazine or news site.

While we may try to avoid those overt forms of aggression, what about microaggression? Indeed, what is a microaggression? According to the authors, microaggressions are behaviors that may not be blatant forms of aggression, they assault “the souls of oppressed groups," and they "still rage from the pulpit, the pew, the Sunday school class, the hymnal, the seminary curriculum, the ordination process, and in pastoral counseling" (p. 1). The concept of "microaggression" has been around since the 1970s, but the concept has begun to make its way into broader conversations about behavior. The authors build on the work of Derald Wing Sue, who defines microaggressions as "brief, everyday exchanges that send denigrating messages to certain individuals because of their group membership" (p. 12). These aggressions can take a variety of forms, and we all perpetrate them. They may take the form of microinsults (subtle insults such as a transgender person continually experiencing the use of the preferred pronoun). They may take the form of microinvalidations, in which the personal experiences of marginalized groups are not considered valid. One example is a person’s insistence that he or she is color-blind. They say to an African American person that they don’t the person’s color, thereby denying part of a person’s identity. Often this results from a failure to recognize white privilege. Or, as another, people make comments to a third-generation U.S. citizen whose family had immigrated from Columbia to the United States about how articulate he is. In other words, he is being cast as a perpetual foreigner. The third form of aggression is the "microassault. While the first two are largely unintentional, a microassault is intentional and is intended to demean the person targeted. These assaults are similar to more overt expressions of bigotry, but have been toned down and are subtler. The authors point to the way in which LGBT persons are targeted from the pulpit as being “psychologically disordered.” Or, consider how a person of Middle Eastern descent has their religion or ethnic heritage denigrated. It may not always rise to full-on hate speech, but it still serves to denigrate a person.

The book is divided into three parts. The first part introduces us to microaggressions. Part two addresses three targets of microaggression—those targeted due to race, gender, along with sexual orientation and gender identity. Part Three looks at how microaggression is exhibited in preaching and education, music, space, and prayer, and finally pastoral relationships.  The third section of the book addresses important questions facing the church. How do we preach in ways that avoid inflicting harm on others? In our worship, what kind of language do we use for God and for humanity. This is especially tricky with regard to our hymnody. What about pastoral relationships. What is appropriate and inappropriate behavior?

There were times as I read through the book that I felt like there was a lot of nit-picking. And yet, if we as the church seek to be not only respectful and tolerant but truly welcoming, isn’t it appropriate to begin listening empathically to the voices of those who have been targeted? As we try to listen, it is helpful to reflect on how we may have experienced microaggressions directed at us. For instance, I started wearing glasses in fourth grade. I'm very nearsighted, so I can't do much without them. Growing up I remember being called "four-eyes." Whether done as teasing or not, it hurt.

This book is important because many of our congregations, especially progressive ones, want to be welcoming and affirming of people. Despite our good intentions, we may find ourselves perpetuated stereotypes and behaviors that stigmatize persons. One of the stories told in the book is about a woman invited to preach at a three-day revival. There were two other preachers, both male. On the night of the revival, the four clergy processed in, with the woman minister being the fourth in line. Because there were three chairs in the chancel, someone had to sit on the front pew. Because she was last, she ended up on the front pew. The second night was the same, but this time she was the preacher. The three men took the chairs.  When it came time for her to preach that second night, the host pastor introduced here as a “great lady preacher” and spoke of her husband and two sons, both of whom were good basketball players. No mention was made of her education or awards for preaching, as had been true of the male preacher the night before. Then, rather than invite her to the pulpit, where preaching was to occur, she was relegated to the lectern. In other words, she experienced a microinvalidation. By focusing on her gender, as well as having her sit on the front pew and then making her preach from the lectern, the impression was left with the congregation that she didn't measure up to the male preachers. Or, think about how we welcome a transgender person. One of the most discouraging experiences for a transgender person is use of a rest-room. If you're a male transitioning to a female, which bathroom do you use? Not being ready for this eventuality is to exclude. The book is full of examples of ways in which, we, often unintentionally, create barriers and injure persons due to their gender, ethnicity, sexual orientation, gender identity, abilities, and more.

I should make note here that in addition to the three sections of the book that engage us in conversation about the nature of microaggression, the targets, and their presence in the church and its ministry, the authors have helpfully provided a glossary of terms. Many of the terms used here are technical and perhaps new to the reader. For example, I didn’t know the meaning of cisgender, though I had begun to see it in print. Cisgender refers to “an individual who experiences his or own gender as matching the sex assigned at birth.” That would describe me.


I believe this book is necessary reading for church leaders especially. I expect that it will open eyes and hearts. You may not enjoy reading it. You may want to set it aside.  You even may feel like this doesn't apply to you. But if you do some soul-searching, I expect that you will discover the ways in which you have committed microaggressions (and experienced a few directed at you as well).  The point of this book isn't making people feel guilty. The authors have written this book because they want us to find solutions to these problems. They want to help us bring to an end the microaggressions that frequently occur in the life of the church. The first step in finding solutions is recognizing our complicity.
Email Post
Labels: bigotry Books Church Gender gender identity LGBT Microaggressions Ministry Race Reviews Welcome