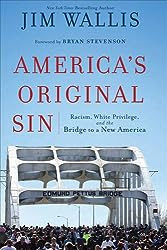 Racism is America's original sin. That is a very theological diagnosis, but an accurate one. It is a sin that has festered in our midst from the earliest days of European exploration and settlement to the present. It is a sin that has been passed down from generation to generation. It is deeply embedded in the American psyche, and even today many of us live in denial that one can be infected by this sin. Yet, the evidence suggests otherwise.

Jim Wallis is a Christian activist who has attempted to address this reality throughout his adult life and ministry. He is aware that his own reality is affected by his own ethnicity. He, like me, benefits from what we have been calling white privilege. He has been involved in this work through the auspices of Sojourners, a leading Christian social justice ministry. Jim comes at this conversation from an interesting perspective. That being his roots in Detroit. Metro-Detroit, which is my home at this time, has experienced deep racial divides that even today are difficult to bridge. He witnessed this growing up and it has influenced his own vision of ministry and engagement in public life.

Wallis’ latest book is both diagnosis and word of hope. It is appropriate that we define racism up front, because it is a word that is often misunderstood. It is often used as a synonym for prejudice, and while it involves prejudice, which we may all experience toward others, racism is by definition prejudice with power. That is, groups and persons with power are able to utilize prejudice to control those who are different and who lack power. So, while the nation fought a Civil War that brought to an end slavery in America, that war did not end racism. In the 1950s and 1960s the Civil Rights Movement emerged, and it led to important court cases and enactment of important civil rights legislation. But that did not end racism in America. It may have put an end to the most overt expressions of racism, but it didn’t necessarily change hearts and minds. Therefore, even though the election of the first Black President was a move forward, it still did not push us into a “post-racial America.” Indeed, nearly fifty years after the death of Martin Luther King, Jr. the church remains just about as segregated today as it did then.

This book written by Jim Wallis serves as an important primer on America's original sin. It is a deeply personal book that is written from Wallis’ own participation in the ongoing effort to end racism and build bridges across racial/ethnic divides. To do this he must address the often unconfessed issue of white privilege that hangs over our national conversation. This includes the Christian community, even Progressive/Liberal Christianity. He admits, as we who are white and male must do, that he is the beneficiary of a system that rewards those who are white and male. Having grown up in Detroit, as an adult he has spent much of his life living in communities where he is part of the ethnic minority.  His encounters with his neighbors have influenced his life and vision. He also admits that "no matter what you do to help overcome racism, you can never escape white privilege in America if you are white" (p. xxii).


This is a challenging book, but it is also a hopeful one. It involves a confession of sin, but it also offers the hope that we can create a bridge to a new America. The cover of the book features the Edmund Pettis Bridge in Selma, Alabama. Those who crossed that bridge in 1965 participated in one of the most pivotal moments in the Civil Rights Movement. It took great courage for Civil Rights leaders to brave a gauntlet of forces intent on doing bodily harm if necessary to deter a non-violent movement for change. That they were able finally to cross the bridge forced the hand of the President and Congress to enact important civil rights legislation, including the Voting Rights Act, which is currently under attack. That was one bridge that had been crossed, but we still have bridges to build and to cross so that we can become the nation that Dr. King and others envisioned.

The book begins with the story of Wallis’ own encounter with race and his developing vision. From there we go to Ferguson and Baltimore. Wallis develops the premise of original sin and its legacy. Being theological, there is also a call to repentance, which is more than saying you are sorry. Moving further in Wallis talks about dying to "Whiteness." That doesn't mean we who are of European ancestry must feel guilty about our heritage, but it does require that we reject the ideology of whiteness, that is the ideology of white supremacy.  We who are of European origin must give up the myth that European culture and society is somehow superior to other cultures, so that one must assimilate into whiteness to be successful in America.

An important chapter takes us into the church, which remains largely segregated—that includes most liberal/progressive congregations. He asks us to consider what a truly multi-racial church would look like. Getting there requires intentionality, and the acknowledgement that diversity isn't an end in itself. It requires the development of a spirit of inclusion and an empowerment of leadership that is truly multi-racial. This all requires a great deal of adaptability, especially on the part of those who have traditionally held power! It also requires interaction, getting to know people who might not be just like you. Wallis writes of the fact that 75% of Americans have a completely white social network:

I believe that is a very important statistic to explain where we are today, especially with the nation's deep history of racism and the clear data about the implicit racial biases we have been discussing. The lack of direct, regular, and personal connection makes it very difficult to get beyond racial biases and stereotypes that are still so very strong in white American Society. (p. 199).

Any conversation about race and America cannot avoid discussion of the role of police in our country. Wallis speaks of moving from envisioning the police as warriors to guardians. Serving and protecting needs to be made a priority! It is important to affirm that both black lives and blue lives matter. All of this requires building trust within communities, and this requires moving more fully toward community policing, ending the school-to-prison pipeline, and mass incarceration. Speaking of that, we need to address what has come to be called the "New Jim Crow." The racial disparity of our prison population must be addressed. Much of the problem is rooted in America's drug policies, which affect African American communities much more than other communities. Along with recognizing the disparities in our laws, Wallis encourages a move toward restorative justice, so that the purpose of the criminal justice system is to repair harm.

It's not just the African American community that faces the impact of original sin. Immigrant communities are impacted as well. Immigration policy today has become very politicized, and the lives of people living in this country are at stake. The system is broken, but there is no political will, despite the fact that both the Roman Catholic Church and evangelicals have been calling for reform. There is, of course, fear in the land that "those people" will come and take over. White America feels threatened. The response isn't pretty. It's also not very Christian.

Racism is our original sin. It affects everything that occurs in our nation. But it need not have the final word. We can build a new bridge. We can cross the bridge to that new America Jim Wallis envisions. We must do so because the demographic shift is leading quickly to a multi-racial country. The question is whether we will adapt and embrace the other or will we seek to retrench and protect what is perceived to be the blessings of the good old days (when white males were in control)?  If we’re to pursue the former, it will take a great deal of courage, but it is also the right thing to do!


I believe that this is an essential book to read, especially those who are white and Christian.  It is important that those who, like me, are white hear from one who is also white calling on us to repent. Repentance is not easy. We prefer a cheap grace that requires nothing of us, but that is not what Wallis offers. So, let us read and consider what it will take to cross the bridge to a New America.
Email Post
Labels: Books Civil Rights Immigration Jim Wallis Racism Racism in America Reviews White Privilege Whiteness