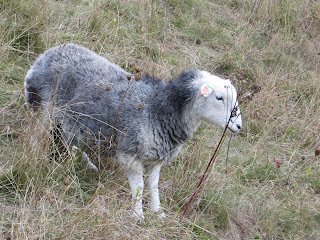 22 At that time the festival of the Dedication took place in Jerusalem. It was winter, 23 and Jesus was walking in the temple, in the portico of Solomon. 24 So the Jews gathered around him and said to him, “How long will you keep us in suspense? If you are the Messiah, tell us plainly.” 25 Jesus answered, “I have told you, and you do not believe. The works that I do in my Father’s name testify to me; 26 but you do not believe, because you do not belong to my sheep.27 My sheep hear my voice. I know them, and they follow me. 28 I give them eternal life, and they will never perish. No one will snatch them out of my hand. 29 What my Father has given me is greater than all else, and no one can snatch it out of the Father’s hand. 30 The Father and I are one.”

The fourth Sunday of Easter has been deemed Good Shepherd Sunday. Therefore, the lectionary deviates to some extent from its Easter reflections on the resurrection and returns to the pre-Easter story of Jesus’ ministry. According to this section of John’s Gospel, Jesus has been in a discussion of sorts with some Jewish counterparts—perhaps leaders—about his mission and whether they will affirm it. The setting is Jerusalem. He’s in town for the winter festival of Dedication or Hanukkah. This is the only reference to that festival in the New Testament. We know this festival to be the celebration of the Maccabean rededication of the Jerusalem Temple, which had been desecrated by Antiochus IV. Whether this festival has a deeper meaning for John is unclear, but it is a reminder that in John Jesus regularly travels to Jerusalem.

The “Jews,” whomever John believes this group to be, challenges Jesus, as they do regularly in this Gospel. They want a clear word from Jesus on his messianic pretensions. Jesus responds by telling them that he has already done so, but they wouldn’t believe him. This particular debate in the Temple precincts takes place in the aftermath of the healing of the man born blind (John 9). In the preceding verses to this reading, a passage not included in lectionary readings, there are questions among Jesus’ audience as to whether he did this sign/healing by the power of God or the power of a demon. The blind man believed that his healing came from God. While his physical blindness was removed, the spiritual blindness of Jesus’ opponents remained. He was healed; they were not.

One of the primary themes in John concerns belief. Will the audience believe in this message, and more specifically in Jesus? In John Jesus doesn’t simply do miracles, he offers signs—like turning into wine or healing a blind man. The question that each of these events elicit is whether one is willing to believe in Jesus. Consider Jesus’ response to Nicodemus, where he famously told Nicodemus that “everyone who believes in him may not perish but have eternal life” (John 3:16). Belief is connected to eternal life, both in that scene and in the present one. But belief is more than simply assent to some doctrinal statement. It involves entrusting one’s life in the hands of God.

This selection from John 10 is a continuation of the longer Good Shepherd discourse. Jesus has already declared that he is the Good Shepherd, who is willing to lay down his life for the sheep (John 10:11).  The question here is who hears the voice of the shepherd and thus follows that voice? In other words, who is to be counted among those who are in the sheepfold?

In this Good Shepherd discourse, the relationship of shepherd and sheep is central. According to John’s Jesus, the Good Shepherd is not like the hireling. When danger comes the hireling flees, but the true shepherd remains with the sheep. Therefore, Jesus had declared “I am the Good Shepherd. I know my own and my own know me” (John 10:14). “You do not believe,” Jesus says, “because you do not belong to my sheep” (Jn. 10:26).  He tells them that if there were his sheep he would know them, and they would know him. There would be clarity. There would be light (Hanukkah is after all a feast of light).  The fact that they refused to believe, means that they remained blind to his identity. They couldn’t see the light. Therefore, they were not part of the flock, because the flock knows the voice of the shepherd. The benefit of being part of the flock is eternal life.

Indeed, what is it that the Father has given Jesus? In context, it would appear to be the promise of life. Life goes to those who are in relationship with Jesus. The shepherd and sheep know each other. They’re in relationship. We know from our own relationships, that we reveal more about ourselves to those closest to us than to those who are strangers or mere acquaintances. I’m more apt to share what’s on my heart with my wife than anyone else in my circle. That is because of the closeness of our relationship that has been built over thirty years of marriage. So being in relationship means sharing in the blessings that come from that relationship. For those who believe, and belief is more than mere assent to doctrines, but rather is trusting one’s life to the cover of the other (as sheep do with the shepherd), they will share in the life eternal that belongs to the Son. It is good to remember when we read John’s Gospel that Jesus to be understood as the Word made flesh. He was in the beginning with God, and all things exist through him. That is true going back in time and forward in time.

Not only do the sheep have a life-giving relationship with the Shepherd, but the Shepherd, who is the Son, is one with the Father. No wonder that the audience responds with anger to this statement. The lectionary cuts off the response in verse 31, but those who do not and cannot believe, see this statement of connection as blasphemy. So, they pick up stones to cast against him, for he has, in their eyes made himself out to be God. That cannot, in their eyes, be abided. But for those who have ears to hear, this will make sense. He is the Word of God made flesh.

For John, the opponents, those who reject his claim to be one with the Father, remain blind to who Jesus is. Not only that, but they cannot be counted among his sheep, because they cannot hear his voice, or at least they can’t recognize his voice. It is for them a foreign language. The question is, are our eyes and ears attuned to Jesus?
Email Post
Labels: Belief Easter Eternal Life Faith in Jesus God's Voice Good Shepherd Gospel of John Lectionary Reflections