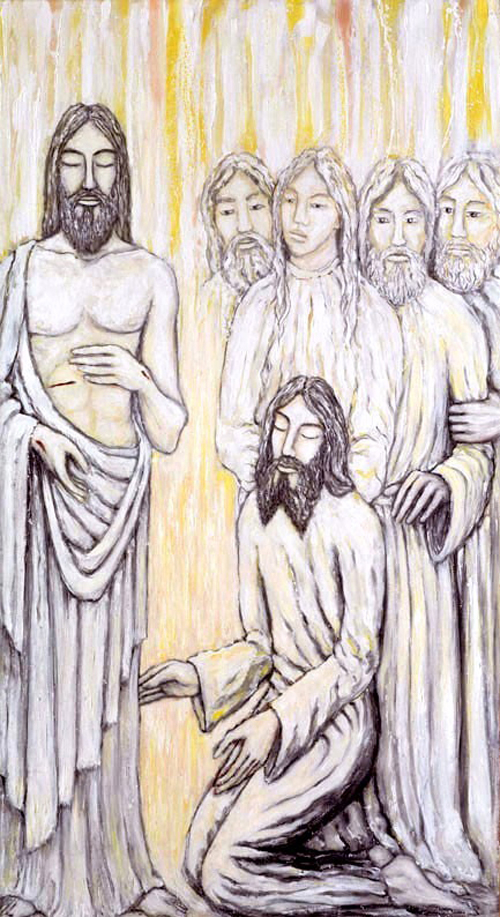 
Last Sunday the sanctuary was filled with color and the music was stirring. We declared: “Christ the Lord is Risen Today. ” And who can forget the powerful strains of the “Hallelujah Chorus” on the organ as the service concluded. Most of the tulips are gone, but there are still signs of Easter’s glory in the sanctuary. That’s good news, because the season of Easter has just gotten started. There are still Easter hymns like “Thine Is the Glory” to sing, and encounters with the risen Christ yet to be explored.

In the Gospel of John, Easter morning begins with Mary Magdalene’s encounter with the Risen Christ. This makes her the first witness to the resurrection. After her encounter with Jesus, she went and shared the good news with the rest of the community. Despite Mary’s good news, fear still reigned among the disciples as evening rolled around. They locked themselves in a room somewhere in Jerusalem out of fear of the religious authorities. They’ve heard good news, but they’re not sure what to make of it. Then without warning Jesus appears in this fear-ridden room. You might be expecting the words “be not afraid,” but instead he greets the stunned disciples with the words: “Peace be with you.” With this greeting Jesus then shows them the wounds in his hands and in his side.

It’s easy to miss that statement about Jesus displaying his hands and side, though it comes up again in Jesus’ appearance to Thomas a week later. Amy Plantinga Pauw picks up on these declarations about Jesus’ wounds, and takes note of Amos Yong’s work on disability and the Bible. You might remember that Amos came to Central Woodward several years ago to talk about how we read the bible in light of human experiences with disability. This is what she writes:

John 20:19-31 is a guide for being an Easter community where the wounds of crucifixion are not denied, where the continued reality of death and failure and trauma is not covered up, where our lament finds a communal home alongside our joy. Resurrection faith means having the courage to look at our wounds. [Connections. 2 (Kindle loc. 6851).

With this display of his resurrected but wounded body, the disciples rejoice in the Lord. They face their own wounds, including their fear, as they embrace the risen Christ.

Now, this is the first of two appearances to be found in this morning’s reading from the Gospel of John.  The other appearance comes a week later, when Jesus appears to Thomas, who for some reason is absent from this first gathering. Jesus will show his wounds to Thomas as well, so that Thomas might believe. Jesus doesn’t just appear to the disciples and reveal that his resurrected body includes his wounds, though this is important. As Amos Yong suggests, the wounds on Jesus’ body are signs that “blemished, defective, and impaired” bodies are redeemed, but the marks are not erased. These marks reveal the “wisdom, power, and glory of God” [The Bible, Disability and the Church, p. 130].  The suffering is over. The weeping is over. But the marks remain as a witness to God’s redeeming grace.

With these appearances the risen Christ not only reveals himself to the disciples, but he commissions them to proclaim the good news of the resurrection so the world can share in his victory over death. As the second century theologian and bishop Irenaeus put it: “the Word of God, our Lord Jesus Christ, who did, through His transcendent love, become what we are, that He might bring us to be even what He is Himself.” [Adversus Haeresies, Book 5, Preface].  As Paul reminds us, Jesus is the first fruits of our own resurrection (1 Cor. 15:20).

Hearing this message, concerning the implications of Jesus’ life, death, and resurrection, prepares us to receive John’s summary statement about what Jesus hoped to accomplish with these two appearances:

Now Jesus did many other signs in the presence of his disciples, which are not written in this book. But these are written so that you may come to believe that Jesus is the Messiah, the Son of God, and that through believing you may have life in his name. (Jn. 20:30-31).

When it comes to believing, we’re not talking about merely affirming a set of doctrines. We’re talking about entrusting our lives to Jesus so we might not only have life on the far side of the grave, but on this side as well. With this affirmation, we return to Jesus’ Easter evening appearance to the disciples, who out of fear have locked themselves in a room somewhere in Jerusalem.

After the shock of his sudden appearance wore off, their fear gave way to joy. Now, it’s time to celebrate this reunion of sorts. But Jesus didn’t simply show up for a reunion with his disciples. He didn’t show up simply for the celebration. That’s because Jesus shows up to commission them for a job and to give them the tools needed to fulfill that job. You might call this John’s version of Pentecost or John’s version of the Great Commission. If we turn to Acts 1:8, we see Jesus commissioning the disciples to preach the good news, but not until the Spirit comes upon them, which occurs in Acts 2. John just has different way of telling the story, and it’s a powerful story.

When we envision this next scene, we need to remember Jesus is meeting with more than simply the ten disciples. I’m assuming Mary Magdalene is there. Since we don’t know the identity of the Beloved Disciple and whether he’s numbered among the ten, I’m including him in the guest list. Then there’s Nicodemus and Joseph of Arimathea, who made arrangements for Jesus’ burial. Surely they’re in the room. What about Jesus’ mother, and Mary, the wife of Clopas, who stood there at the cross? You would think that Mary and Martha, and their brother Lazarus, who lived in nearby Bethany, would be there. I expect there were several more people present in this gathering, though for some reason Thomas wasn’t among them.

Using our imaginations to envision the room, we will see Jesus turning to this group of disciples. He says to them, once again: “Peace be with you.” Then in Johannine terms, and perhaps even Trinitarian terms, Jesus says to them: “As the Father has sent me, so I send you.” But Jesus doesn’t send them out on their own. He follows up this declaration with the words: “Receive the Spirit.” That’s where I’d like to dwell for a moment.

In words reminiscent of the creation story, John tells us that Jesus breathed the Spirit on the disciples. Better yet, he breathed the Spirit into the disciples. That’s a rather powerful image. John uses the Greek word emphysaō, which is the basis for our word emphysema. This word is used  twice in the Septuagint, or Greek version of the Old Testament. In Genesis 2 and in Ezekiel 37. In both cases the word emphysaō is connected to imparting the pneuma or ruach, which is the breath of life.

In Genesis 2, God forms the first human being from the dust of the earth and breathes into him the “breath of life,” so that he might become a “living being” [Gen. 2:7].  In Ezekiel 37, the prophet speaks to the dry bones on behalf of God: “I will cause breath to enter you, and you shall live.” Then the prophet calls for the four winds to breathe life into the bones.

Gregory Robbins comments on this set of events, writing:  “Jesus, sent by the Father, ‘animates’ the dust-bound, fear-slain, boney-faithed disciples with the life-giving Spirit.” [Feasting on the Word, p. 399]. Such are we. But, like these first disciples into whom Jesus breathed the life-giving Spirit, he has breathed the Spirit into us, as was promised at the beginning of the Gospel of John.

After Jesus came to be baptized, John the Baptist spoke of one who would baptize with the Holy Spirit. John testified:

“I have seen the Spirit come down like a dove from Heaven and rest upon him. Indeed, it is true that I did not recognize him by myself, but he who sent me to baptise with water told me this: ‘The one on whom you will see the Spirit coming down and resting is the man who baptises with the Holy Spirit!’ Now I have seen this happen and I declare publicly before you all that he is the Son of God!” (John 1:32-34, Phillips).

Therefore, things have come full circle. The one whom John the Baptist promised would baptize with the Spirit, has done just that.

Not only does Jesus baptize the disciples with the Holy Spirit, by breathing into them the life-giving Spirit of God, he gives them a commission. He declares to them “If you forgive the sins of any, they are forgiven them; if you retain the sins of any, they are retained.” This may sound a bit odd, but it’s the way of salvation. It’s the way forward to bring healing to the nations. This is the way Marianne Meye Thompson puts it: “Now Jesus breathes the life-giving Spirit on his disciples. Having received the new life of the Spirit, they themselves are commissioned to be agents of extending that new life to others in the task of forgiving sins.” [Connections: 2: loc. 6768].

When Thomas makes his confession of faith, after touching the risen Christ, with the words “My Lord and my God,” Jesus tells him: “Blessed are those who have not seen and yet have come to believe.”  This would include us, I would presume! So, “O Breath of Life, come sweeping through us, revive your church with life and power.” [Bessie Porter Head, “O Breath of Life,” Chalice Hymnal, 250].