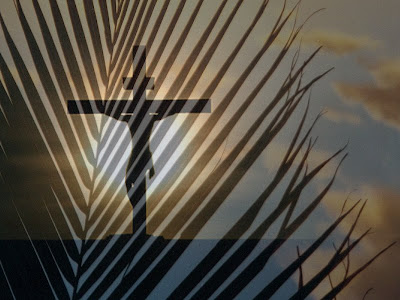 5 Let the same mind be in you that was in Christ Jesus,
6 who, though he was in the form of God,
did not regard equality with God
as something to be exploited,
7 but emptied himself,
taking the form of a slave,
being born in human likeness.
And being found in human form,
8     he humbled himself
and became obedient to the point of death—
even death on a cross.
9 Therefore God also highly exalted him
and gave him the name
that is above every name,
10 so that at the name of Jesus
every knee should bend,
in heaven and on earth and under the earth,
11 and every tongue should confess
that Jesus Christ is Lord,
to the glory of God the Father.

The Sunday before Easter presents the church with two choices when it comes to the lectionary. Should we go with the Palms or the Passion? As there is no established second reading for Palm Sunday, the choice has been made for us by the creators of the lectionary. That’s because I’m currently working through the second reading in this cycle. Therefore, the reading comes from the Passion Sunday selections. In this particular year, this seems to be an especially appropriate decision in any case. Since the world is facing a pandemic that has led to the cancelation of worship services across the globe, which will result in few if any palm processions (and the same goes for in-person Easter services this year).

The appointed Gospel reading comes from Matthew 27:11-54, which takes us from Jesus’ appearance before Pilate through the crucifixion to the Centurion’s declaration “Truly this was God’s Son!” (As a side note, I can’t read this without hearing John Wayne intone those words in The Greatest Story Ever Told – a 1960s Jesus movie starring Max Von Sydow as Jesus). Here in Philippians 2, we hear a word about the incarnation of the one who was in the form of God but did not exploit his equality with God but chose to empty himself of his pre-existent heavenly state, become human, and face death on a cross, all of which leads to his exaltation to the position of ruler of the cosmos. Paul offers this Jesus to us as an example, so that we might find unity as the body of Christ by becoming servants to one another and thus being of one mind. If we read between the lines, the Philippian church, which Paul founded, was experiencing a time of conflict.  Thus, Paul tells them to take on the mind of Christ, as revealed in this ancient hymn that Paul has appropriated for this purpose. The hymn reminds us that Jesus endured humiliation for our benefit and was vindicated by God as a result. The one who was crucified was then exalted by God so that he might move from humility to glory.

When Paul wrote his letter to the Philippian Church, he was sitting in a jail cell (Phil. 1:12-17). Where he was being detained is unknown to us. Paul doesn’t identify the location though he does mention the Praetorian guard. That would suggest a cell in Rome. It’s a clue but not proof. That he is in prison, suggests confinement at best and perhaps a degree of suffering as well. That is his situation. The letter suggests that the congregation was facing its own sets of difficulties. While Paul was the founding pastor of this congregation, he could only reach out to them virtually, offering guidance by way of a letter.

Regarding the internal concerns, he asks that they exhibit unity. He asks them to make his joy complete by having the same mind, love, and unity. He asks that they not do anything out of selfishness or conceit. Instead, he asks that they have the same mind as Jesus (Phil. 2:1-5). That request leads to what many scholars (and I tend to agree) consider an early Christian hymn that takes note of Jesus’ pre-existence with God (his divine status), his self-emptying (humility) that leads to the cross, and finally, his exaltation by God, thus vindicating Jesus by establishing him as ruler of the cosmos. Thus, to fully embody God’s realm, one should embrace the way of Jesus, which has the promise of exaltation.

The hymn takes note of three distinct phases of the Christ event. We begin with an affirmation of Christ’s pre-existence. The hymn states unequivocally that “though he was in the form of God . . . but emptied himself, taking the form of a slave, being born in human likeness” (Phil. 2:6-7). This isn’t quite the same wording as John’s prologue (John 1:1-18), but it’s close. The second phase is Christ’s self-emptying of himself of divinity so that he might become human and face death on a cross. Finally, the second half of the hymn celebrates God’s vindication of Jesus by exalting him to the position of ruler of the cosmos [Ronald J. Allen, Connections, Kindle loc 4177-4192].

For those of us who affirm the divinity of Christ, this is one of the most direct statements (along with John 1) in support of that position. Pre-existence doesn’t prove divinity, but it suggests that in Paul’s estimation that Jesus has a status that is ultimately different from us, even if he experienced life as being fully human. Karl Barth writes that “this equality of Christ with God is, so to speak, the fixed, ultimate background from which his road sets out to which he returns” [Epistle to the Philippians, p. 61]. This is the starting point for a movement from heaven to earth and back, so to speak. But the point here is not his equality with God, but what he does with it that is the point. That leads to the emptying of himself of his stature as the Father’s equal so that he might become a human and ultimately face death on a cross. Thus, his humanity fully covers his divinity, and this was of his own doing, his own choosing, and yet it was an act of obedience. This is the point of Passion Sunday, the willingness to go to the cross, to experience death, and not just any death, but the most humiliating of deaths. He descended to the depths in his self-emptying and bore upon himself the brokenness of the old age.

This is not the final word in the story. The second part of the hymn (verse 2) reveals that God vindicated Jesus by exalting him to the position of ruler of the cosmos. This exaltation is revealed in the name given to him, which stands above every name, so that “at the name of Jesus every knee should bend, in heaven and on earth and under the earth, and every tongue should confess that Jesus Christ is Lord, to the glory of God the Father.” As I read this, I can’t help but think about the context in which it is revealed. Caesar is the exalted one, to whom every knee would bow, and whose name would be confessed as Lord. In this confession, Paul (or the hymn writer) reveals that Jesus, the one whom Rome crucified, had been exalted above Caesar. Thus, Jesus, not Caesar, is Lord. While Caesar might rule an empire, Jesus ruled the cosmos and that to the glory of God.
Paul opens up this reading by asking that we be like Christ, who emptied himself of his glory so as to taste life as we live it, even to the point of death, as a result, God vindicated him by raising him to a position of glory. If this is true for Jesus, as those who are his people, might we participate in what is his by nature? As we ponder this question, I leave you with this word from one of Gregory of Nazianzus’ Festal Orations:

Let us become like Christ, since Christ also became like us; let us become gods because of him, since he also because of us became human. He assumed what is worse that he might give what is better. He became poor that we through his poverty might become rich. He took the form of a slave, that we might regain freedom. He descended that we might be lifted up, he was tempted that we might be victorious, he was dishonored to glorify us, he died to save us, he ascended to draw to himself us who lay below in the Fall of sin. Let us give everything, offer everything, to the one who gave himself as a ransom and an exchange for us. But one can give nothing comparable to oneself, understanding the mystery and becoming because of him everything that he became because of us. [Gregory of Nazianzus, Festal Orations, p. 59].

As we begin a Holy Week like no other I’ve experienced in life, may we take up the mantle of Jesus, and find in him a path of obedience that leads to salvation.