Beyond the Tyranny of the Text (James Henry Harris) -- A Review 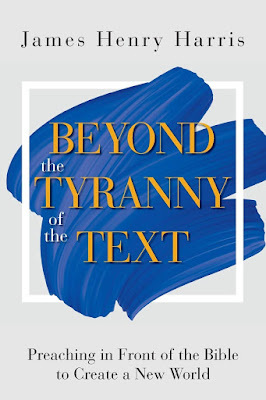 BEYOND THE TYRANNY OF THE TEXT: Preaching in Front of theBible to Create a New World. By James Henry Harris. Nashville, TN: Abingdon Press, 2019. Xxv + 156 pages.

In seminary we are taught to get behind the biblical text, so we could understand the context in which the text was written. Then we could try to determine what the original author(s) meant by their words. We called this exegesis (still do in fact). Preachers, of course, are called upon to do more than simply restate to their congregations what the original authors meant by what they wrote. Preachers are called to bring a word that not only informs but transforms the lives of those who hear their message. I understand the process. I’ve been working at it for almost forty years. But what does it mean to get in front of the text? Not only what does it mean to get in front of the Bible as suggested by the subtitle of the book under review, but what does the author mean with the book’s title: Beyond the Tyranny of the Text?  Shouldn't the title give us pause?

The author of this book with the provocative title is James Harris, who is a pastor and professor of homiletics and pastoral theology. He writes for his students out of his own experience as a preacher, and more specifically as a preacher in Black churches. Harris is a distinguished professor of homiletics and pastoral theology at the School of Theology at Virginia Union University in Richmond, Virginia. He is also the pastor of Second Baptist Church (West End), again in Richmond.

While Harris has a great love for the biblical text, he believes that it must be unread if it is to have a liberating effect. That sounds a bit ominous, but Harris engages with this task of unreading the biblical text in conversation with philosopher Paul Ricoeur. Not having read Ricoeur I may have missed some of the nuances of the book, which caused me to struggle with his vision at points. Then again, I've also been trained to trust the scholarly engagement with the text and let it speak for itself. Harris isn't so sure this is always a good idea.

This is a book written with Black preachers in mind, which doesn’t describe me. Fortunately, while I might not be the primary audience, this book is not just for Black preachers. In other words, one need not be Black to recognize the need to free the text of Scripture from its original meaning and let it speak anew, even if that means arguing with it and moving beyond it. Consider texts that suppress women or seem to support slavery.

Because this functions to a degree as a homiletical textbook, Harris is concerned about method. With that in mind, he lays out a five-part method that is designed to help us get in front of the text. This involves reading, re-reading, un-reading, writing, and re-writing. The last step, re-writing, is the actual act of preaching the sermon. His intention is for this book to bridge the gap between theory and practice. At points, because of the intended audience, I felt as if some of the practical advice might not apply, but then again, we can always learn new things, even long-time preachers nearing retirement!

As he lays out the method, he engages with a particular text, the text of Jonah. He uses Jonah as a means to explore how this method can frame the creation of the sermon. Its form and use of literary elements make it a useful example for preachers. His goal here is the creation of sermons that combine substance with style. With that in mind, he is very focused on how words are used.

The method begins with reading the text, but not only the biblical texts, but other texts, including novels, history, poetry, theology and more. This is a starting point. This is the first step toward understanding. From there we move to "re-reading," This is a continuation of the conversation with the text. It involves, he suggests, letting the text get into one's pores. It's living with the text. But we're not finished with our reading of the text, for the third step is an act of "un-reading." He writes that "un-reading is the act of reconfiguring the text in a way that is contextually relevant and pragmatic. It is the commitment to rec-contextualize and appropriates the text to the current life situation of the community of free and oppressed people" (p. 9). Here is where the process of getting in front of the text really begins. It is here that the text is allowed to become liberating by being liberated from the past. The purpose of the three steps is to discern oppressive and hegemonic influences that need to be confronted in the text. He gives as an example the household codes in the post-Pauline letters that have been used to oppress persons of color and women. This is, he suggests, the pivot point when we move from interpreting to applying.

Reading, re-reading, and un-reading provide the foundation for writing and re-writing. Writing is the first draft. It is here that misunderstandings can be discovered and corrected. Finally, we reach the fifth step, which is rewriting. Here is where all that has come before is organized into a sermon. Interestingly, he is greatly concerned about fluff, that stuff we add into the mix to make it more interesting, but which distracts from the purpose of the sermon. It's at this point that one must edit to remove the fluff so that the message can make its point. His focus in this book is making sure that preaching is a liberating event. He addresses the concerns of the Black church and the Black community. For white preachers, some of what he shares will be difficult to hear, but necessary anyway.

There is much here for me to ponder. While I may feel more comfortable letting the text speak for itself and not trying to get in front of it, nevertheless, if the text is going to speak something of value today, we will need to get in front of it. We will need to be free to move beyond it so that the text doesn’t become a form of tyranny rather than freedom. That's a difficult task, but it seems to be necessary if Good News that is liberating is to be heard.