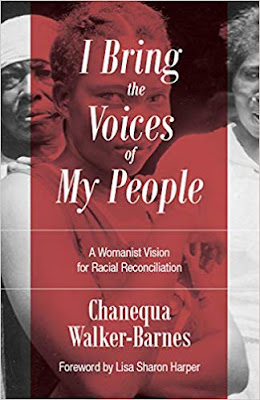 I believe in racial reconciliation with my entire being, but I know that I have a lot of work left to do before I fully embody that commitment. I am a white male heterosexual Christian. As such, I benefit from certain privileges that go with this status. Part of me wants to believe that I'm just like everybody else, but it's not true. We are in fact all very different, and those differences make us who we are. For some, this difference offers us privileges others don’t get to enjoy. For others, these differences can be oppressive. At some levels, progress has been made, but we still have a long way to go before we reach true equity.

What we need then are resources like Chanequa Walker-Barnes' book I Bring the Voices of My People to stir up the conversation.  Books like this one are not easy reads. It's not that the writing style is dense and foreboding. It's the subject matter. This is a subject matter many of us would rather not engage. It cuts to close to home. Nevertheless, there is truth here that we need to hear if we’re to move toward true racial reconciliation. Walker Barnes is an African American heterosexual woman who is also a Christian. She is trained as a clinical psychologist and teaches practical theology at McAfee School of Theology (Mercer University).

Walker-Barnes doesn't pull any punches as she addresses the question of racial reconciliation from a Womanist perspective. Much of the book serves as a challenge to White Christians like me to face the realities of our situation, especially the challenge of White privilege. While she sees the process as difficult, she closes the book with a word of hope. Before we get there, we have a lot of difficult work to participate in.

The subtitle reveals that is a "Womanist Vision for Racial Reconciliation." As such it represents the intersection between race and gender that emerged out of the experiences of African American feminists, who challenged the reigning feminist visions that are largely rooted in the experiences of White women. As such, she writes out of her own experience of racism and sexism. Theologically she positions herself within an evangelical context, and yet because she is both a woman and African American, she finds herself living between two communities.

Walker-Barnes begins the conversation by reminding us that racism isn't about friendship or feelings. We can be friends with persons of color and still be racists. Racism is about power. In the American context, power belongs to Whites, both male and female. Thus, racism is rooted in Whiteness. This is important to acknowledge. Persons of “color” might be prejudiced, but that prejudice does equal racism for in our culture that prejudice doesn’t include power. With this in mind, we must start by defining terms, such as race and ethnicity. While race may be a social construction, it holds the keys to power. One of the issues brought forth early in the book is symmetry. She points out that the idea of color-blindness functions as a way of equalizing something that isn't equal. It neglects differences in context, background, opportunity, and more. In other words, racism is about white supremacy. We have to deal with that!

If racism has to do with white supremacy and power, it doesn't stand alone. Remember this is a Womanist view of the subject. Other factors come into play when we talk about racial reconciliation. These factors include gender. Thus, we must engage the conversation from an intersectional perspective. She notes that "Identity is always multilayered. That is, none of us exists as just a raced person. Our identities are complex combinations of race, class, gender identity, sexual orientation, nationality, geographic origin, dis/ability status, religion, and so on" (p. 65). This multilayered nature of the conversation means that we must bring all of these factors into our conversations about racial reconciliation. One element of this conversation that I hadn't considered closely but which makes sense is the idea of colorism. The fact that in our culture whiteness is highly prized, so that we equate female beauty with the lightness of skin, as well as certain views of hair and body type, must be considered.  There is much more here to be engaged, but the complexity of the issue and how it is engrained in society reminds us that that racial reconciliation will not be easily traversed.

Perhaps the most challenging chapter, at least for a person like me, is chapter three:  "The Unbearable Whiteness of Being." In other words, if we're going to have racial reconciliation, we're going to have to talk about whiteness. Many persons of European ancestry—people like me—tend to see the world as if we are the norm. There is a built-in assumption that "White cultural values, beliefs, aesthetics, and yes, even people are inherently superior to those of all other people groups" (p. 115). Walker-Barnes approaches this conversation from a perspective of pastoral theology and psychology. She writes that she approaches this conversation "as someone trained in the diagnosis and treatment of mental illness and dysfunctional family systems." Therefore, she wants "to explore the notion of whiteness as a sociocultural system, indeed as a condition of moral injury, into which all White Americans—regardless of their particular ethnic heritage or immigration history -- are socialized and in which they participate daily in ways that continuously reinforce White supremacy and undermine racial justice." (p. 116). I hadn't thought of whiteness involving moral injury, a concept that involves recognizing that our souls are injured and require healing due to our participation in whiteness. By the time we've finished this chapter, especially if we're White (and male) we will have had our vision of racial reconciliation upended and disrupted. We'll also have discovered that this is a more difficult pathway than we ever imagined. It also calls for repentance and more. As difficult as this might be, it's necessary if we’re to achieve racial reconciliation.

As challenging as the previous chapters may have been, we're not quite ready to experience reconciliation. First, we must face the curse. Yes, the path begins with a curse. Walker-Barnes uses Alice Walker's book The Color Purple as a means of exploring this next step. She writes that reconciliation must begin with confrontational truth-telling if we're to reach liberation and reconciliation. I've not read the book nor seen the movie, but as Walker-Barnes lays out the story, we can understand the power of its message. She points out that the process of racial reconciliation can't end with white folks like me feeling good about having a new friend of color, if, as she writes, "the material realities of people of color are unchanged" (p. 203). The goal here is ultimately wholeness, where oppression is no longer present. She writes that "racial reconciliation is part of God's ongoing and eschatological mission to restore wholeness and peace to a world broken by systemic injustice." (p. 204). That involves dismantling white supremacy.

The book concludes with a vision of hope that is rooted in what she calls spiritual strivings. The task of reconciliation may seem impossible, but there is hope if we see this as a spiritual movement of transformation. It involves standing in solidarity with one another, and for those of us who are White, that means stepping back from the center to the margins, so that others can experience the center.

This is a powerful and challenging book. Walker-Barnes writes with passion. She's not afraid to confront. She names the issues at hand. While she understands the importance of grace, she won’t let us jump there too quickly. First, we have to do the hard work of addressing the elephants in the room. Nevertheless, she offers us a way forward. That is important, for this is a book about racial reconciliation. Nevertheless, the hope she offers us requires us to walk a difficult path that requires much of those of us who are White and have never experienced the realities experienced by people of color. All of this is rooted in a deep and abiding spirituality.