The Sons of Abraham Reunite- A Reflection 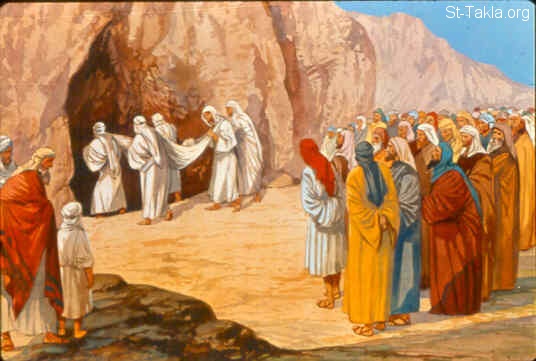 7 Abraham lived to the age of 175. 8 Abraham took his last breath and died after a good long life, a content old man, and he was placed with his ancestors. 9 His sons Isaac and Ishmael buried him in the cave in Machpelah, which is in the field of Zohar’s son Ephron the Hittite, near Mamre. 10 Thus Abraham and his wife Sarah were both buried in the field Abraham had purchased from the Hittites. 11 After Abraham’s death, God blessed his son Isaac, and Isaac lived in Beer-lahai-roi. (Genesis 25:7-11)

I am preaching from Romans 4 on Sunday. In this passage, Paul seeks to re-define the place of Abraham in such a way that Abraham can be seen as the ancestor not only of Jews but Gentiles as well. To do this, he must de-center the Law as the linchpin of God’s relationship with the Jews. In order to sidestep the Law, and with it circumcision, he needs to root Abraham’s call in his faith not his works. Thus, as Paul wrote of Abraham, he “believed God, and it was reckoned to him as righteousness” (Gen. 15:6; Rom 4:3). Paul’s apparent goal in Romans 4 appears to be equalizing the relationship between Jewish and Gentile Christians in the emerging church.

Engaging with Paul’s view of faith and works is fraught with danger, in large part because he can be understood to suggest that the church supersedes God’s covenant with the Jewish people, leading to what is often called replacement theology. While one can argue that this isn’t Paul’s view of the covenant relationship between God and Israel, it can be read that way. That has dangerous consequences, as history has demonstrated.

As I’ve pondered the lectionary reading from Romans 4, I’m drawn not so much to the faith and works debate, but to Paul’s recognition that the call of Abraham might have universal implications. He recognizes that the promise to Abraham “depends on faith, in order that the promise may rest on grace and be guaranteed to all his descendants, not only to the adherents of the law but also to those who share the faith of Abraham (for he is the father of all of us) (Rom. 4:16). The Law, to Paul, has a purpose, but there is a greater purpose and that is the reconciliation of all of creation, in that all might be blessed through the descendants (the seed) of Abraham.

That leads me to the passage that heads this posting, the reading from Genesis 25 that describes the burial of Abraham. According to Genesis 25, Abraham died at the old age of 175. When it came time to bury him, his sons Isaac and Ishmael came together and laid him to rest in the cave of Machpelah. The text doesn’t say much here, but I find it intriguing. Might it hint at broader blessings to come to the whole of Creation? Now the writers of Genesis don’t say that they reconciled with each other and lived happily ever after, but still, it’s intriguing.

Bruce Feiler makes this comment about this scene that might hint at something of value for those of us who are committed to interfaith engagement.

But the meaning of this moment cannot be diminished. Abraham achieves in death what he could never achieve in life: a moment of reconciliation between his two sons, a peaceful, communal, side-by-side flicker of possibility in which they are not rivals, scions, warriors, adversaries, children, Jews, Christians, or Muslims. They are brothers. They are mourners. [Feiler, Abraham, 208].

Where might we find reconciliation, not just as Christians, Jews, and Muslims, but people of all faiths? What might this small, seemingly insignificant moment in the biblical story say to us in this time and place? How might we be Abraham’s descendants, and thus participate in blessing the nations?