The Blessings of Abraham's Faith 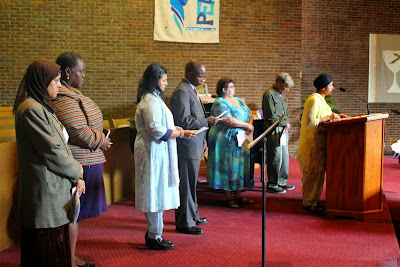 4 What then are we to say was gained by Abraham, our ancestor according to the flesh? 2 For if Abraham was justified by works, he has something to boast about, but not before God. 3 For what does the scripture say? “Abraham believed God, and it was reckoned to him as righteousness.” 4 Now to one who works, wages are not reckoned as a gift but as something due. 5 But to one who without works trusts him who justifies the ungodly, such faith is reckoned as righteousness.

13 For the promise that he would inherit the world did not come to Abraham or to his descendants through the law but through the righteousness of faith. 14 If it is the adherents of the law who are to be the heirs, faith is null and the promise is void. 15 For the law brings wrath; but where there is no law, neither is there violation.

16 For this reason it depends on faith, in order that the promise may rest on grace and be guaranteed to all his descendants, not only to the adherents of the law but also to those who share the faith of Abraham (for he is the father of all of us, 17 as it is written, “I have made you the father of many nations”)—in the presence of the God in whom he believed, who gives life to the dead and calls into existence the things that do not exist.

The Revised Common Lectionary started off the Lenten season with a reading from Romans 5:12-19. The focus there was on the contrast between the first Adam, through whom sin and then death entered the world, and the last Adam, Jesus, through whom life was restored. With that word laid before us, we gather for the second week of Lent. This week the Lectionary’s Second Reading asks us to step back to the fourth chapter of Romans. Here Paul speaks not of Adam, nor even of Jesus, but of Abraham, our ancestor in the faith. The message here is that justification comes not through law, which did not exist at the moment of Abraham’s call, but rather through grace. In other words, writing to a new Christian community Paul skips over Moses and goes directly to Abraham, our father in the faith.

Abraham is an interesting figure, and I think we probably need to go beyond Paul’s descriptions to truly get a sense of his place in the story. Paul wants us to see Abraham as our spiritual ancestor, even if we don’t descend from his lineage according to the flesh. According to Paul, the way this happens is through grace. Paul’s reading of Scripture, more specifically Genesis 15:6 (LXX), tells us that “Abraham believed God and this was reckoned to him as righteousness.” Thus, no works are involved, just belief or trust. However, as CEB Cranfield notes, Rabbinic readings, as well as Philo, read this quite differently [Cranfield, Romans, 1:229]. For them, more than Abraham’s belief or trust in God; it also involved specific actions (Works). These works included circumcision, something Paul didn’t want to impose on Gentile believers. Nevertheless, Paul took on a verse that might prove otherwise and suggested that he had the correct interpretation.  Interestingly, the Common English Bible version of Genesis 15:6, which draws not from the Septuagint but the Masoretic text would seem to go against Paul’s reading: “Abram trusted the Lord, and the Lord recognized Abram’s high moral character” (Gen 15:6 CEB). So, who has the correct interpretation? Paul or the Rabbis? Whatever it was that caught the eye of God, Abraham is understood by Paul to be the ancestor not only of the Jewish people, but spiritually of all humanity, Jew and Gentile. That is probably his purpose here --- making sure that the two groups making up the Church in Rome understand their kinship as Abraham's children.

As we continue our journey into Lent, how might we engage this account of Abraham being our spiritual ancestor? It’s clear that Paul is seeking to expand the definition of what it means to be a descendant of Abraham, extending the definition of being a child of Abraham to those who are not circumcised (even though Abraham circumcised the males in his household as a sign of his faithfulness to the covenant). In Paul’s mind, if Abraham’s call and the promise that goes with it predates the giving of the Law, then something other than adherence to the Law would define one’s position in the family tree. After all, Abraham couldn’t have been justified on the basis of the Law of Moses, which had not been revealed. So, as Sarah Heaner Lancaster notes, Abraham “obeyed God, but he did not do so by following the written prescriptions that were to come. In this, too, he is like the Gentiles about which Paul is concerned, who obey by following something unwritten rather than something written. Abraham was in right standing with God because he was faithful in his trust of God, so his faithfulness justified him” [Lancaster, Romans, p. 77]. If this is true for Abraham, might it also be true for Gentile believers who come to God through Christ, but not through the Law? Later, Paul will reveal that Gentile believers have been grafted into the vine that is Abraham’s descendants, but only through faith not by works (Rom 11:17-21).

The first reading for the week, from Genesis 12:1-4a contains the promise that Paul takes hold of in verse 17 of Romans 4. In that original divine call, Abraham receives the promise that will lead him to pack up the family and head off to a new land, walking simply by faith. This, according to Paul, is the act of faith to which we are to take hold of, and which brings Gentiles into the fold. But remember, this faith goes both ways. God puts faith in Abraham, even as Abraham puts faith in God’s promises.

All this said, is Paul an antinomian? That is, does he believe that there is no such thing as right or wrong? Does he mean that ethics don’t matter? I don’t think so. But I do believe Paul wants us to keep things in their proper order. Do we start with works or merit or do we start with grace? Might it be that good works are the product of a life of faith? If the latter is true, then we might read James as a not so subtle reminder that sometimes readers of Paul got him wrong. Remember that Paul did say that while all things are lawful, not all things are profitable. (1 Cor. 6:12; 1 Cor. 10:23).

The Good News for us here is that we are children of Abraham, and to Abraham and his descendants has been given the covenant that involves being a blessing to the nations. While God seems intent on providing an heir to Abraham through his marriage to Sarah (Gen. 17), we should not forget that Abraham had another son, his firstborn, with Hagar. God promised to make a nation of him as well (Gen.21:9-21). So, might we take this as a word to us to be in relationship, as Christians, with all of Abraham’s descendants, whether they be Jewish, Muslim, or Christian? Might we then extend that even further to all of God’s children, whether descending from Abraham by the flesh or the Spirit?