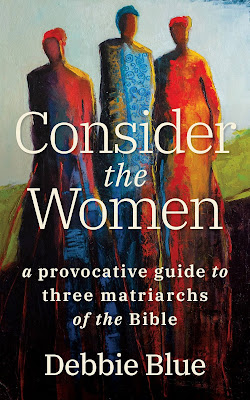 CONSIDER THE WOMEN: A Provocative Guide to Three Matriarchs of the Bible. By Debbie Blue. Grand Rapids: Wm. B. Eerdmans Publishing Co., 2019. 225 pages.

When we think of biblical figures, the people we name likely are male. Abraham, Moses, David, Elijah, Jesus, and Paul might come to mind.  But what about the women? Who might the matriarchs of the faith be and what might their legacy be? While Mary, the mother of Jesus, is a well-known figure, she plays a greater role in the Quran than the New Testament. But, what other women stand out in your mind? Would you be surprised to hear the names of Hagar and Esther in the same company as Mary? Sarah, perhaps; maybe Miriam, the sister of Moses and Aaron, but Hagar and Esther? Nevertheless, perhaps Hagar and Esther are fitting companions to Mary, the Mother of Jesus, or more precisely, Mary the mother of God (Theotokos).

Debbie Blue is the pastor of House of Mercy, a church located in St. Paul, Minnesota. She is also the author of Consider the Women, a book that invites to explore stories and the legacy of Hagar, Esther, and Mary. She invites to consider the stories of these three matriarchs not only from a Christian perspective but more broadly from an Abrahamic one. That is, she engages Hagar in conversation with Islam, for Hagar is the mother of Ishmael and the matriarch of Islam. As for Esther, her life is celebrated in Judaism in the Feast of Purim. Of course, Mary is the mother of Jesus around whom Christianity is centered. These three women have provocative stories, requiring a provocative introduction. This is what we find present in Debbie Blue’s intriguing book.

This is first and foremost a book about the Abrahamic tradition, of which Islam, Judaism, and Christianity embody. In telling these stories Blue lifts up three women who play significant roles in each of the three traditions. By focusing on these three women, we see another side of the Abrahamic story, as well as the feminine face of God, which is reflected in these biblical stories. As Blue writes, the women in the biblical story are "a little out there" They don't "conform to the image of the virtuous woman" she learned about in Sunday school (p. 25). These are real women, who are often anything but subservient.

After laying out the overarching story of the Abrahamic faith in Part One of the book, she takes us through the lives of Hagar, Esther, and Mary (parts two through four). While part four, focusing on Mary was enlightening, it was the sections on Hagar and Esther, that I found to be the most intriguing, and perhaps the most informative. That’s because at least for Christians these two women seem to live in the background of our faith. Hagar is the mother of Ishmael, and Ishmael’s story seems foreign to Christians. As for Esther, well, that book says about God. Yet, for Islam and Judaism, these are important figures. Thus, they worthy of our attention.

In the section on Hagar, Blue begins by retelling the biblical story of Hagar, including the way she has been treated in Christian retellings of the Abrahamic story (Paul doesn’t have a high view of her). But, in this telling of the story, Hagar is a matriarch on par with Abraham. We see a woman who is resilient and is rewarded by God for standing up for herself and her son after being exiled by Sarah and Abraham. We encounter a woman who names God as "The God who Sees." We hear the promise made to her that through her son, that she would be the mother of a great nation. This a beautiful retelling of her story, but perhaps even more important are the chapters in this section that explore her role within Islam. This includes the Qur'an, but also in the contemporary lives of Muslim women, whom we get to meet through Blue’s encounters. These encounters and her reports of them offer a different picture of Islam than many have of this religion. While most Western Christians see Islam as being oppressive to women, we discover a religion that especially in its origins had a liberating message for women. Like Hagar, women have played a significant role in the history of Islam, and in its current embodiment. If you read only this section (not that you would only read this section) you will be rewarded.

From a Christian perspective, Hagar and Esther are problematic figures. Hagar suffers from Paul's unfortunate contrast of her with Sarah, in his effort to lift grace over law. That portrayal has colored our perspective; besides we trace our theological heritage through Isaac, the son of Abraham and Sarah, not Ishmael, son of Abraham and Hagar. For Islam, however, Hagar and Ishmael are the figures through whom they trace their lineage to Abraham. It will benefit us to know this side of the story.

When it comes to Esther, I have more experience. We read Esther in my Hebrew class, mainly because it was free of theological material, allowing us to focus on the language rather than theology. More recently I led a bible study of Esther, which was well-received. Nevertheless, we largely stayed in the ancient world. While Blue does take us into the biblical story of Esther, she takes us beyond it to how Esther is understood within contemporary Judaism. While Christians have tended to downplay the Book of Esther because it lacks references to God, and unfortunately, at times because it was perceived as too Jewish and became the victim of Christian anti-Jewish and anti-Semitic propaganda. Whereas we rarely engage with the Book of Esther in Christian contexts, in Judaism, it is the foundation for the Feast of Purim. This is a major event in Jewish life that features the reading of the entire book of Esther, complete with costumes, noisemakers, and more (apparently a bit of drinking is involved). Blue takes us from the biblical story to Jewish celebrations of Purim. Even as Hagar was the scorned but provocative woman in Genesis, Esther is even more provocative, for she uses her sexual prowess and beauty to save her people. It's not the story we might expect to be celebrated, and yet, it is a story of the salvation of a people. That’s because Esther learned that perhaps her position at court was meant to be.

When it comes to Mary, we may perceive her to be sinless and submissive, but she is also a provocative figure. If we pay close attention to the stories, she is not subservient. Consider her prayer at the annunciation or her role at the wedding at Cana. Remember that in the Magnificat, she is the one who proclaims the downfall of the mighty, while in time she is proclaimed to be the Mother of God (Theotokos). While Protestants have found it difficult to embrace her, she has been an ever-present presence, pictured in a variety of ways that may have served as a bridge between pagan understandings of the goddesses with the monotheism of Christianity. How this happens, well that's the intriguing part. After reading this you may come to have a different picture of Mary who appears to us as the Lady of Guadalupe or even the #MeTooMary. As Blue points out, she’s not easy to pin down. Oh, and Muslims love her as much as Catholics!  Blue writes that

Mary is black. She is Mexican. Sometimes she is lily white too. She wears the masks of the Zapatistas, and you can find her tame and deferential at the Catholic bookstore—whenever, wherever, and however she is found, though, she is unfailingly true to her song. She comes for the poor. And the sick. And the wounded. For mothers who have lost their children, the tired and the oppressed. (p. 170).

Yes, Mary is more than we have considered, as is true of Hagar and Esther.

Ultimately, Consider the Women is a book that will surprise. It will also provide points of contact for Christian readers with friends outside the Christian community. Knowing the story of Hagar and the role she plays in Islam might help mitigate Christian concerns about women in Islam and open up conversations among women of both communities. Perhaps the same will be true of conversations with Jewish women about Esther. While the book will prove informative, I think more will happen here. Blue writes in a way that draws you in (this is my first real experience with her work, but likely not the last encounter). As for the biblical stories, you don't have to know them to be pulled into them through Blue's writing. But, once you do, you will have a new appreciation not only for these three women but others as well. Yes, there are more than men that populate the biblical story. In case you decide to use Consider the Women in a group study, a study guide is provided. That will further the conversation as well. So, take and read, you will be blessed (at least I was!).