One Last Meal -- A Reflection for Holy Thursday 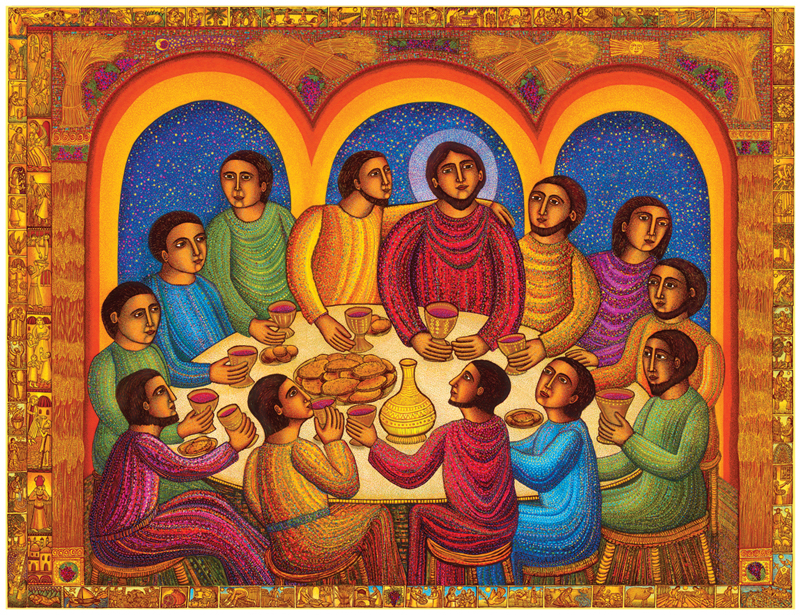 It is time for the church to gather and remember that last meal Jesus shared with his disciples. As with every service or event of Holy Week in the year 2020, whatever we do will be done virtually. It might be a service broadcast live from Facebook or a gathering on Zoom (or some other similar format). It won’t be a “normal” Maundy Thursday gathering, and yet we can still take hold of the message of the moment.

On this particular day, the Last Supper is the defining event. Two different traditions frame this meal. The Synoptic Gospels (Matthew, Mark, and Luke) envision Jesus gathering together with his disciples to celebrate a Passover meal. This is why Jesus had come to Jerusalem with his disciples. Passover was a pilgrimage feast that marks the movement of the Jewish people out of slavery in Egypt that was to serve as a “day of remembrance for you. You shall celebrate it as a festival to the Lord; throughout your generations you shall observe it as a perpetual ordinance” (Exodus 12:14). In many ways, the version of this meal shared with us by Matthew, Mark, and Luke, incorporates this call to remember and to do so perpetually throughout all generations.

It worth noting that as western Christians (Roman Catholics and Protestants) gather for this service of remembrance in 2020, it is the second night of Passover in the Jewish tradition. While the first night is usually a family event, sometimes the second night of Passover is celebrated at the synagogue. So, as we gather in our differing ways it worth remembering that Holy Week is defined by the Passover, which began yesterday and will continue for eight days in total.

As with the creche at Christmas, we tend to merge the two traditions. Thus, many churches will share the Lord’s Supper and provide a service of foot washing. Perhaps that’s appropriate. Besides, whether the meal was held on Passover or the night before Passover still defines the week.

Regarding the words of institution, which are pronounced over most communion elements, there are four versions present in the New Testament. There are three versions found in the Synoptics, which are very similar. Then there is the version found in Paul’s first letter to the Corinthian church. This is the earliest New Testament attestation of the meal and the call to remember. Paul doesn’t directly connect this to Passover but instead sets in the context of betrayal. It was the night of his betrayal that he shared the meal and gave it a permanent definition. Here is Paul’s version of the story:

23 For I received from the Lord what I also handed on to you, that the Lord Jesus on the night when he was betrayed took a loaf of bread, 24 and when he had given thanks, he broke it and said, “This is my body that is for you. Do this in remembrance of me.” 25 In the same way, he took the cup also, after supper, saying, “This cup is the new covenant in my blood. Do this, as often as you drink it, in remembrance of me.” 26 For as often as you eat this bread and drink the cup, you proclaim the Lord’s death until he comes.  (1 Corinthians 11:23-26).

These are familiar words. In traditions like mine that provide weekly communion, they are likely as well known to the people as the Lord’s Prayer (which we include in our communion prayer). While Christians may differ as to the intent of these words, whether we’re simply invited to remember or whether the elements of bread and wine/juice are transformed into the body and blood of Jesus, they do serve as a call to participate in the life of Jesus.  May we, if we are Christians, embrace this call to participate in the life of Jesus, especially at a time like this, when so many around the world are suffering from a Pandemic that makes people sick, causes them to die, leads to losses of jobs, and social isolation. May we remember Jesus, who offered himself for others.

In the words of a nineteenth-century hymn, may we sing:

Be known to us in breaking bread, but do not then depart;
Savior, abide with us, and spread thy table in our heart.

There sup with us in love divine; they body and thy blood,
That living bread, that heavenly wine, be our immortal food.
—James Montgomery, 1825