The Sixth Word from the Cross -- It is Finished (John 19) 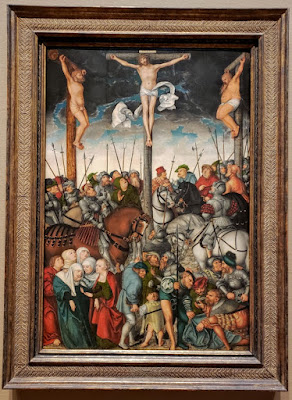 
Good afternoon and welcome to the Academy of Parish Clergy’s Meditations on the Seven Last Words.  My name is Bob Cornwall, and I’m the Sr. Pastor at Central Woodward Christian Church (Disciples of Christ) in Troy Michigan. I’m part of a cohort of preachers who are officers and board members of the Academy of Parish Clergy—an international organization that supports accountability and excellence in local congregational ministries. You can find the schedule of preachers and links for today’s messages on the APC web page at www.apclergy.org. It’s as a member of that community of clergy that I welcome you.

I’m bringing to you the sixth word from the cross. It’s found in the thirtieth verse of chapter nineteen of the Gospel of John. Hear this sixth word together with the fifth word that precedes it. That word is “I Thirst.”

28 After this, when Jesus knew that all was now finished, he said (in order to fulfill the scripture), “I am thirsty.” 29 A jar full of sour wine was standing there. So they put a sponge full of the wine on a branch of hyssop and held it to his mouth. 30 When Jesus had received the wine, he said, “It is finished.” Then he bowed his head and gave up his spirit.  (Jn. 19:28-30)

As we come to this point in the story, the end is near. Jesus had received a sponge full of wine in response to his cry of thirst. Now, with death close at hand, he summons enough strength to cry out one more time: “It is Finished.” This is the last word from the cross that John records.

We hear this sixth word at a time when death is making its mark on the earth, and we wonder, when can we say “It is Finished?” Every day we hear the numbers of cases and deaths rise, especially here in Southeast Michigan. All across the globe, people are grieving the loss of loved ones. Even if we’re not grieving the deaths of people close to us, we may be feeling isolated and alone. We may have already cried out to God: “My God, My God, why have you forsaken me.”

This is the context in which hear Jesus declare: “It is finished.” While John offers this word in the form of a declaration, we might hear it in the form of a question. We might be asking when can we say “It is finished.” We want to know when can back to some sense of normalcy. At the very least, we’re wondering when staying safe won’t require staying home and wearing masks when we go out in public? Yes, we might be hearing this word differently in 2020 than we would if the situation were different.

For a moment, however, can we go back to that day when they crucified our Lord? If you had been there at the foot of the cross, what would you have heard? How would you have responded if you heard Jesus cry out “It is finished” and then give up his spirit? Would you have walked away filled with grief and disappointment?

We have the benefit of hindsight. We can hear these words in light of the Resurrection and Ascension. But what if we didn’t truly understand Jesus’ words about the resurrection? I can imagine the grief that came over his friends and family gathered at the foot of the cross, even as we grieve the deaths of loved ones and even of strangers at a moment like this. It would be appropriate to respond with loud bursts of lament at seeing Jesus give up his spirit. “It is finished.”

This story of Jesus started out with such promise. John the Baptist had spotted Jesus when he came to the Jordan. John pointed to Jesus and declared to his followers:  “Look! The Lamb of God who takes away the sins of the world” (Jn 1:26-30). While John’s Gospel doesn’t tell us that John the Baptist baptized Jesus, we can go to the other Gospels to watch as Jesus emerged from the Jordan and heard a voice from heaven declare: “This is My Son, in him I am well pleased.”  Yes, things did start out well, but now that young man to whom both John and the heavens bore witness cries out in anguish and pain: “It is finished.” With that cry, death comes quickly

Of course, it’s not just Jesus’ death that troubles us. It’s how he died. This isn’t a heroic death. Jesus doesn’t die of wounds suffered in battle like Achilles. He doesn’t follow in the footsteps of Socrates and take death into his own hands. He doesn’t die peacefully in bed having lived a long and fruitful life like David. No, he dies on a Roman cross, along with two criminals.  In the back of our minds, we hear these words of scripture: “Cursed is the one who hangs on a tree” (Deut. 21:23; Gal. 3:13).  Yes, cursed is he who hangs on a cross on a hill outside Jerusalem. This is the lamb of God who takes away the sins of the world.

While we may know the rest of the story, for a moment it’s important to ask ourselves how we would have experienced this final word from the cross. Yes, Easter’s glories will come soon enough, but we’re not there yet.

There is a temptation to hear these words as simply a statement of completion. Jesus had completed his assignment. Now it’s time to get on with the next assignment. That’s one way John’s story of the cross has been understood. It almost seems like Jesus is going through the motions. Others hear in these words a message of triumph. It’s all a matter of inflection. But is this merely a graduation ceremony?

We can read John’s account in a rather bloodless way, but I think we miss the point. What I hear in this moment is a cry of resignation at death’s finality. Death is the enemy. If we hear this cry in that way, then we can see the evidence of a cruel and demeaning death meted out to a person who modeled  God’s compassion, grace, and justice to the world. So, despite the promise of his life, in the words Barbara Brown Taylor, he was a “spectacular failure.”

As we consider his life and his death, we can look back and wonder why did we put our trust in him? We listened intently as he taught us on the hillside. We were amazed at the sight of thousands being fed with a few loaves of bread and a couple of fish. We paid attention when he raised Lazarus. We cheered him as he rode into Jerusalem. But now all we hear is: “I give up.” “It’s over.”  There isn’t any energy or potential left and we begin to weep. How could it end this way?

In a nation that celebrates success so that the pursuit of success has become the bedrock of American theology, could these words offer us a different vision of life lived before God? Might his words and his death give us a different definition of success?

As we contemplate these words, might we also hear in them a promise of a new beginning? Death might be the enemy, but could something new emerge from this moment of death? Even as we grieve, might we see a glimmer of hope so that we might we sing together:

“Now the green blade rises from the buried grain,
wheat that in dark earth many days has lain;
love lives again, that with the dead has been;
Love is come again like wheat arising green.” [John M. C. Crum, 1928].

Now, I’d like to thank you for joining us today. Our vigil will continue at the top of the hour. I invite you to head on over to the Facebook Page of St. John United Church of Christ in Kankakee, Illinois, where my colleague the Rev. Barbara Lohrbach will offer a meditation on  Christ's seventh and final word from the cross at 3:00 Central time.  You can find the link on the Academy of Parish Clergy website at www.apclergy.org.