Living in Christ - A Sermon for Pentecost 17A (Philippians 2) 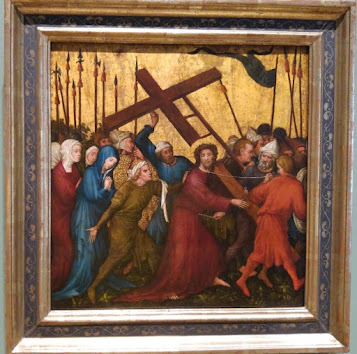 It’s election season again. That means political ads bombard us day and night on TV, on the radio, on Facebook, and in emails. These ads remind us that we are a divided nation that seems unable to discern what is good and right. So, how do we heal this brokenness that afflicts our land? How might we find unity when our communities, our churches, and families, are so divided? It’s important that we remember that there can be no true unity without justice for everyone who has been denied justice.

While we may want to achieve wholeness in our broken world, we’ll have to start within the Christian community. We have to get our own act together or our witness will be diluted. That’s why Paul told the Philippians to conduct their lives in a manner worthy of the Gospel of Jesus Christ (Phil. 1:27). Now Paul calls on this community he dearly loves to stand together and make his joy complete by being “of the same mind, having the same love, being in full accord and of one mind” (vs. 1-2). That starts with embodying the humility Jesus displayed in his life, as well as in his death on the cross. So, as Eugene Peterson puts it in The Message:

Don’t push your way to the front; don’t sweet-talk your way to the top. Put yourself aside, and help others get ahead. Don’t be obsessed with getting your own advantage. Forget yourselves long enough to lend a helping hand. [Phil. 2:3-4 MSG]

That’s where Jesus comes in.

Like any good preacher, Paul knows that hymns can strike a chord. So, Paul borrows from a hymn that the Philippian church probably had been singing. He introduces the hymn by telling the church to “let the same mind be in you that was in Christ Jesus.” That introduction leads us to the hymn, which has two stanzas.

The first stanza speaks of the way in which Jesus, though he was in the form of God, didn’t exploit his equality with God. Instead, Jesus emptied himself of his divine prerogatives by taking on the form of a servant by being born in human likeness. This decision to let go of his divine prerogatives led to his death on the cross. The second stanza is a hymn of praise that celebrates the exaltation of Jesus, so that “at the name of Jesus every knee should bend, in heaven and on earth and under the earth, and every tongue should confess that Jesus Christ is Lord, to the glory of God the Father” (vs. 10-11). While our culture might find the second stanza attractive, the opening stanza, with its celebration of humility didn’t fit with the culture of that day and it doesn’t fit with the culture of our day. As we listen to the politicians, who love to talk about power, words like humility and meekness imply weakness, and no one wants to be perceived as weak. That’s why autocrats, tyrants, and dictators do everything they can to hold on to power.

This might be the way of the world but when it comes to God’s realm, power is tempered by love, which turns things upside down. Here is how Reinhold Niebuhr put it:

According to the hymn, Jesus had it all, and yet he let go of it so that he could become a human being and follow a path that led to a cross. While suffering is not a necessity, if we take the path that Jesus sets before us, it is a possibility.

As we sing this hymn of praise, confessing that Jesus is Lord to the glory of God the Father, Paul brings us back to earth by encouraging us to conduct ourselves in a manner worthy of the gospel, so that we might be of one mind and one spirit. That is what Paul means when he tells the Philippians to work out their salvation with “fear and trembling.” As Karl Barth puts it, this ”is a shortened expression for ‘to live as a Christian,’ to show and prove oneself what one is as a Christian” [Epistle to the Philippians, p. 72].

As our reading concludes, Paul speaks of God being “at work” in us, enabling us “both to will and to work for his good pleasure.”  However, this work of God takes place in the world, bringing healing to the world’s brokenness. It will require unity in the body of Christ to achieve this goal.

Our Disciples of Christ founders understood this truth. They believed that the Gospel lost its power when Christians were divided amongst themselves. This is why Disciples have always been involved with the ecumenical movement. This truth led Disciples ecumenical leader Peter Ainslie to write decades ago: “The greatest scandal of civilization is that Christians have not learned how to behave toward each other” [Scandal of Christianity, p. 1].

May we go out into the world with Jesus as our guide? May his act of humility show us the way forward as we seek to live into the realm of God? Rather than demanding power for ourselves, might we follow Jesus who took on the form of a servant? As we do this, may we  “forget [o]urselves long enough to lend a helping hand?” (Phil. 2:4 Message).