Generations -- A Sermon for the First Sunday after Christmas 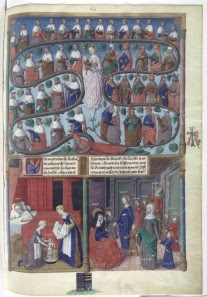 On Christmas Eve we watched as four generations of one family gathered to light the Christ candle. What a wonderful sight it was, because it doesn’t happen all that often.  In fact, largely due to the mobility of our society, our opportunities to gather across the generations has become increasingly difficult.  One of the few places where multiple generations do gather on a regular basis is at church, even if these multiple generations aren’t part of one specific family.
This morning’s reading from the Gospel of Matthew is known for its “begats,” because that’s the word the King James Version uses to count off the forty-two generations of Jesus ancestry, stretching from Abraham to David, from David to the Exile, and finally from the exile to the Christ child.  While some of the persons named in this passage are familiar, most are not.

When we read a passage of scripture like this one, our eyes can begin to glaze over and our minds begin to wander.  There are a few names in this list that are familiar, such as Abraham, Isaac, Jacob, David, and Solomon, but many will seem strange and foreign.  You might even find one name rather intriguing, since it looks as if a fish made it on to the list!  That would be Salmon, the father of Boaz, but this isn’t a fish it’s a person.  While the name looks like that of a fish, it’s probably pronounced Sall-mon not sa -mon.

These names can easily merge into a long meaningless repetition of words, but each of these names has a story, even if some have never been told.  Some of these persons were faithful to God, while others were not.  But such is the nature of a genealogy – as anyone who has traced their family tree knows, there are always a few skeletons in the closet.

Tracing family trees has become a rather popular pastime.  There are many reasons why we do this, but one of the reasons has to do with our identity.  We want to know who we are and where we come from.  Maybe it’s because our society is becoming so mobile that we feel the need for a sense of rootedness, even if it’s in the form of a genealogy.  Some people are going so far as to trace their DNA to get definitive proof about their ancestry. But, if you do go this route, just be forewarned, you might even discover that besides the typical skeletons in the closet, you may even have a few Neanderthals in the family tree.

I haven’t gone so far as to trace my DNA, but due in part to the efforts of my father, I’ve been able to trace the Cornwall family tree back about fourteen generations.  That takes me back to late medieval England.  Like many, my ancestors served in the American Revolution, and the first Cornwall (or Cornwell, depending on the spelling), came to Boston in the 1630s and eventually helped found the town of Milford, Connecticut.  While it’s difficult to prove, I’ve been led to believe that I might even have some noble blood coursing through my veins.  Of course, since records become sketchy the farther back you go, much of the “evidence” is speculation. That speculation includes the possibility that we Cornwalls are descendants of a certain Wampanoag princess named Mary Hyanno.  That first Cornwall in America, William, is said to have married a woman named Mary in about 1640.  For some in the Cornwall family, this Mary has been linked to an Indian princess.  Of course, we’re not the only family that claims Mary Hyanno as an ancestor!  But, even if these claims to nobility or Native American ancestry are more legend than reality, they make for a good story.  I expect that you might have interesting stories to tell about your family tree!

Matthew opens his gospel with a genealogical statement because he wants to answer the question:  Who is Jesus?  Matthew offers us “a record of the ancestors of Jesus Christ, son of David, son of Abraham.”  That means, whoever Jesus is, Abraham and David are important figures in his family tree.  But, not only is he son of Abraham and son of David, he is also the product of the Babylonian exile.

Matthew begins by naming fourteen generations from Abraham to David.  Abraham is, of course, the one with whom God covenants and commissions to be a blessing to the nations.  David is the one whom God commissions to be Israel’s king.  There are fourteen generations linking David to the time of the exile, when the monarchy comes to an end.  Finally, there are fourteen generations between the transformative time of exile and the coming of the Christ. There is one specific claim that emerges from this reading, and that is Jesus is Israel’s messiah.  He is the anointed one, who, as the angel tells Joseph, will save his people from their sins (Matt. 1:21).

While there is a beginning to this gospel, there is also an ending, and the two are related.  The gospel closes with Jesus gathering his followers together for one last word, and he gives them a commission, saying:

Go therefore and make disciples of all nations, baptizing them in the name of the Father and of the Son and of the Holy Spirit, and teaching them to obey everything that I have commanded you.  And remember, I am with you always, to the end of the age (Matt. 28:19-20 NRSV).

In this commission, Jesus brings his disciples, and us, into a story that extends back to the covenant that God made with Abraham and with Sarah.

These genealogies, as Timothy Sensing notes, “highlight Israel’s greatest moments and expose her darkest days” (Feasting on the Gospels--Matthew, Volume 1: A Feasting on the Word Commentary, p. 5). But even the darkest of days cannot keep God from being faithful to God’s promises, which Matthew suggests have come into their fullness in Jesus.

And so we return to the stories behind the names to see how God has been active in the larger story of redemption.

There is much speculation as to the reason why Matthew chose to highlight the four women who figure prominently in Jesus’ ancestry.  One thing we know from the biblical story is that all four were foreigners.  Among the men the stories are also intriguing.  There is Isaac, the one whom God commanded Abraham to sacrifice, and Isaac’s son, Jacob the trickster.  Then there’s Jacob’s son Judah, who has a son by his daughter-in-law, Tamar.  Among the many kings mentioned, some are considered pretty good – Hezekiah and Josiah for instance, but the majority didn’t measure up, and some, like Manasseh, were absolutely evil.  But, in linking Jesus to the royal line, Matthew lifts up Jesus’ royal claims.  Reference to the exile is a reminder that God is faithful to God’s people – for they not only survived the exile but became a new people.  In the end, even if we find  the good, the bad, and the ugly in Jesus’ family tree, we have been given assurance that God’s promise to Abraham remains in force, so that through his descendants the nations will be blessed.

In the closing verses of Matthew’s Gospel, in the Great Commission passage, Jesus includes us, his disciples, his followers, in this family tree.  That is, by faith we are grafted into his family tree, so that in him, we become children of Abraham.  Because we are sons of Abraham through Jesus our brother, we receive the commission, the promise, that the descendants of Abraham will be agents of blessing to the world.

Although Matthew starts out his gospel answering the question – who is Jesus – the gospel concludes with a word as to our own identity.  We are the ones who are called to make disciples and baptize them in the name of the Father, Son, and Holy Spirit.  Since the Christ Candle remains lit this morning, we can take from it a reminder that in Christ, the Son of Abraham and the Son of David, we carry the light of Christ into the world so that it might know the loving presence of God who frees the nations from their exile in the wilderness of Babylon.


Note:  This text is taken from Beyond the Lectionary: A Year of Alternatives to the Revised Common Lectionary, created by David Ackerman.