The Twible (Jana Riess) -- A Review 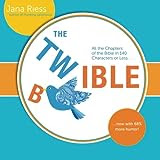 The subtitle should be a clue to the contents of this book.  This is a collection of tweets that summarize every chapter of the Bible. If you’re not familiar with Twitter, it is a very popular social media application that allows a person to send messages using no more than 140 characters.  In other words, it majors in conciseness. For those who’ve not only joined Twitter, but who also follow Jana Riess on Twitter, you likely already know what The Twible is.

Several years ago, Riess began reading through the Bible, from cover to cover, and writing brief, often humorous chapter summaries, which she shared on Twitter.  This isn’t something I would have tried to do, but she has gained quite a following because of it (I too am a follower).  Now, one needn’t be on Twitter to benefit from Jana’s reflections, for they now appear in book form.   For those who have been thinking about reading the Bible from cover to cover but have been deterred by the length of the Bible, this could be a boon.

In thinking about what to say about the book, I decided that I should start off by offering a warning.  I could suggest the book to specific audiences, but in this case it seems appropriate to note who this book might not appeal to.

So, if you don’t like Twitter, you probably won’t like this book; it is a collection of Tweets. More importantly, if you don’t have a sense of humor, you really won’t like this collection.  And, if  you believe that every word in the Bible is not only inerrant but must be treated with such reverence that to either question it or try to be humorous with it will attract divine wrath, then you won’t want to pick up this book.  The same goes for those who treat the Bible with great disdain, believing that it is simply a collection of dangerous fairy tales.  Why?  I think you might misunderstand what Jana is trying to do.

Jana is the author of Flunking Sainthood: A Year of Breaking the Sabbath, Forgetting to Pray, and Still Loving My Neighbor, (Paraclete, 2011).  She is also an editor, who has worked with several publishing companies and blogs for Religion News Service.  She has a rather interesting religious background, being a member of the Church of Jesus Christ of Latter Day Saints (Mormon), while being fully engaged in the Emergent Conversation.  Not only that, but she has a Master’s of Divinity from Princeton Theological Seminary and a Ph.D. in American Religion from Columbia University.

More specific to this book, Jana confesses to have both a great love and respect for the Bible.  It is important to know this because she pushes boundaries, using humor to stimulate not only laughter but thoughtful reflection on the message of Scripture in all its complexity.  As one reads through these Tweets, one is forced to recognize that there are many passages in Scripture that are to put it mildly – problematic.  Too often we sweep them under the rug.  But Jana doesn’t allow us to do this.  Indeed, she is at her best when dealing with passages that deal with things like genocide and rape and exclusion.  We want to laugh, and yet as we laugh we begin to see the darkness in these passages.  She forces us to go back and rethink the way we understand God and read these texts.

The Twible  is a self-published project. Jana never really tells us why she went this direction. While it’s true that more and more people are turning to this means of publishing, and Jana surely understands the business of publishing, I’m wondering whether the publishers she works with found this to be a bit too hot to handle.  I don’t know this for sure, but it is an interesting question to consider.  Whatever the reason for this choice, it is a well produced book that includes her tweeted summaries of every chapter in the Bible, plus some very interesting extras.

As for the Tweets themselves, I should give a few examples:

Matthew 7: Dear judgmental hypocrite:  You probably haven’t noticed, but there’s a big honkin’ plank in your eye. You might want to remove it. (p. 217).

I hope that these three Tweets give you a sense of what you’ll find inside this book.

Having shared a few of the summaries, I’ll turn to the illustrations provided by Leighton Connor.  They are black and white comics that summarize elements of the biblical story.  Like the Tweets, Connor focuses on the humorous aspects of the story.  It is difficult to describe illustrations – so I’ll just say that they add much to the flow of the book.  In addition, each book has its own brief summation. There are also frequent sidebars that explain or lift up elements of the story (like any good study Bible would – only hers contain much more humor than the Oxford Annotated NRSV or the NIV Study Bible).  At the back of the book you’ll find notes that will lead you into helpful discussions.  And in a very helpful move, she provides a “Whos’s Who in the Twible” section.  This is helpful because one must, quite often, abbreviate names in a Tweet.  Thus God is referred to as G and Jesus as JC, and so on.

It is important to reiterate here the importance of having a sense of humor in approaching this collection.  In fact, the material here is edgy, even snarky, which will give Biblical literalists from Al Mohler to Sam Harris considerable headaches.  Jana Riess doesn’t disdain or seek to disrespect the Bible.  In fact, she wants the users of this book to gain, as she did in the process of creating it, a better sense of the scope and story that is contained in this exceedingly complex piece of sacred literature.  She writes:

In short, the Bible is wildly complicated.  The Twible, by contrast, is pretty simple.  It’s goal is to make you laugh.  If you learn something along the way, as I have, all the better.” (p. xii).

It is definitely filled with humor, and if you have a sense of humor you will laugh, but there is more to this project than laughter.  Jana puts her finger on a major problem of our day – the increasing biblical illiteracy present not just in the general public, but within Jewish and Christian communities.  While she insists that the “main purpose of this project has always been to bring levity to an all-too-serious subject,” there is more to this project than that.  Indeed, she notes that the “second-greatest compliment I’ve gotten is when people tell me that The Twible has actually sent them to the original Bible to see for themselves what these stories have to say” (p. xii-xiii).  The fact is – if you’re open to it, this book should accomplish both!

Reading this as a mid-fifties Baby Boomer preacher/scholar I can say that I truly enjoyed it.  But, I think that its real audience is those of younger generations, generations who are increasingly uncomfortable with traditional religion and may find themselves steering clear of sacred literature.  My hope and prayer is that this book will open hearts and minds to the Good News!  That is the hope that I as a pastor have for this project.