Trust in the Lord -- A Sermon for Advent 4A 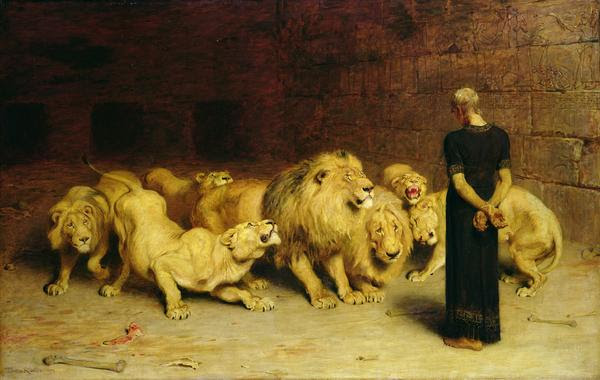 Note:  The text for this sermon is taken from an alternative lectionary -- Beyond the Lectionary: A Year of Alternatives to the Revised Common Lectionary


When we last visited the story of Daniel, he was interpreting ‘the writing on the wall” for the Babylonian king Belshazzar.  As you might remember, the news wasn’t good.  Now, there’s a new king in town named Darius the Mede. Even though Belshazzar promised Daniel the number three position, Darius is hoping to make Daniel his Prime Minister.  That would be number two in the kingdom.  Unfortunately for Daniel, not everyone is happy with his promotion.  A group of his colleagues, who seem to think that Daniel is an interloper, begin plotting against him.  But, when their private investigators can’t turn up any dirt on him, they decide to use his religion against him.

Knowing that kings like to be flattered and that Daniel will only pray to his own God, the plotters suggest that Darius issue an edict commanding the people to worship him, and only him, for a period of thirty days.  It didn’t take long before Daniel’s enemies had enough evidence to convict Daniel.  Although Darius realized the error of his ways, he didn’t have any choice but to follow through on the threat and throw Daniel to the lions.  On the day of his execution, the king is both grief stricken and hopeful. Even as the stone to the den is being rolled into place, he tells Daniel: “Your God – the one you serve so consistently – will rescue you.”

The next morning, when the king goes to the lion’s den he calls out for Daniel, who replies: “Long live the king!  My God sent his messenger, who shut the lion’s mouth.” In rescuing Daniel, God affirmed both Daniel’s innocence and his faithfulness.

As is often true in biblical stories, there is a dark side to this story. Daniel might be saved, but his accusers and their families suffer the fate intended for him. For those who are experiencing oppression, it may seem appropriate to rejoice in the misfortune of your enemies.  It’s understandable, but I don’t it think it fits with the nature of a God who is defined by love and grace.

But, getting back to our story, Darius, who is exceedingly glad that his prime minster has been restored to him, issues another command.  Instead of worshiping him, the king, the people of his realm must now “fear and revere Daniel’s God because: He is the living God.” It’s Daniel’s God who stands firm forever, whose reign is indestructible and will last until the end of time.  It is he who “is the rescuer and savior.”

What does the story of “Daniel and the Lion’s Den” have to do with Advent and Christmas?  The link can be found in these words of Darius: the God of Daniel “is the rescuer and savior.”

There is a similar message in the opening verses of the Gospel of Matthew.  Joseph is sleeping – somewhat fitfully, because he’s trying to figure out what to do with Mary, who happens to be pregnant.  An angel appears in dreams, and reveals to him a name that he is to give to this child that will be born to Mary.  “You are to name him Jesus, because he will save his people from their sins” (Matthew 1:21 NRSV).

The message of Christmas centers on this: that God is our “rescuer and savior,” and it is through Jesus that God will accomplish this task. This promise gives us hope and invites us into a life of faithful service.

This Advent season reminds us that in Christ, God turns the tables on human empires and begins to reveal the true nature of the kingdom of God.  We see this same message revealed in the story of Daniel, which was written during a time when Israel lived under an oppressive regime that threatened to stamp out every vestige of Israel’s faith. In this story, the reader is taken back to another time when Israel’s future looked bleak. The message that Daniel offers is this: while empires come and go, God “stands firm forever,” and that God’s “kingship is indestructible.”  Yes,  “God’s rule will last until the end of time.”  Daniel remains faithful, because he believes this promise is true.  He goes into the lion’s den believing that God can rescue him, even as God rescued his friends from the fiery furnace during the reign of Nebuchadnezzar.  But, the point isn’t that God will deliver us from the mouth of the lion or the fiery furnace simply because we have sufficient faith.  This isn’t the prosperity gospel. It is simply a recognition that God will be faithful to God’s promises.

In a few days we’ll gather to hear Luke’s version of the Christmas story, where the one whom the angels declare will bring peace and good will, will be born not in a palace but a stable.  It is important to remember that God often reverses things.  God does the unexpected. As followers of God, we must always keep this truth in mind.

In thinking about all of this, I thought about life in Nazi Germany.  Some of you may remember those horrific days when Hitler claimed to be the messiah.  His supporters portrayed him as a semi-divine being who demanded their complete allegiance.  Those who failed to worship him could find themselves in prison and even executed, just like those who failed to give Darius “all glory, laud and honor.”

It’s important to remember that while many people hailed Hitler as their savior, many others, like Daniel in this story, remained faithful to the gospel and resisted this evil force.  Some who resisted Hitler did so through their preaching.  They refused to trade the Jewish Jesus for an Aryan one.  They refused to hail Hitler as the messenger of God.  They challenged the government’s decrees, especially when it came to disposing of those the government decided were a drain on society and a threat to the purity of the race.  Some who resisted were imprisoned, others faced exile or were banned from their pulpits, and some we executed.

I recently read a collection of sermons from that era entitled Preaching in Hitler's Shadow.   In this book you’ll find sermons by Karl Barth, Dietrich Bonhoeffer, and Martin Niemoller, one of whom was exiled, one imprisoned, and the other executed. But while these voices are important, they weren’t alone.  Each of the preachers featured in this book knew that their words of resistance could lead to their death, but they chose to be faithful to the Gospel, knowing that God’s realm is  indestructible and will last forever.

One of those preachers was the theologian Rudolph Bultmann. Although Bultmann’s resistance to Hitler isn’t as well known as that of Barth, Bonhoeffer, or Niemoller, he spoke out clearly against the darkness that was Hitler’s regime in his sermon  on the Great Banquet (Luke 14:16-24).  In his sermon Bultmann calls on the congregation:

To be ready for God’s future, means to go into the darkness comforted and ready, ready for that which God has planned for our future (p. 154).

Daniel was ready for God’s future and therefore he entered the darkness, “ready for that which God has planned for our future.”  As we bring our Advent journey to a close, with Daniel we are invited to go into the future, knowing that God is faithful.  That God’s realm is indestructible.  That God is our rescuer and savior.  As Bultmann reminds us in his sermon –

“The future of God does not meet us only at the end of our days; rather, whoever hears this call is permitted always and again to experience something of it, how God makes it purer and stronger, quieter and more cheerful: how God answers the prayer: ‘make me simple, profound, detached, tender and still in Your peace!”  (P. 154).

There are only a few more days before Christmas.  This reading from Daniel invites us to stay faithful, even when we walk through the shadows, because we know that God is faithful and wll, through Jesus, save his people from their sins.