The True Light Cometh -- Lectionary Reflection for Christmas 2A 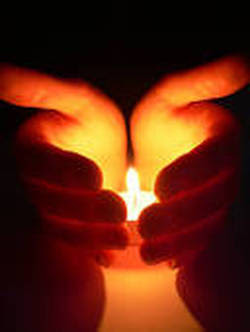 10 He was in the world, and the world came into being through him; yet the world did not know him. 11 He came to what was his own, and his own people did not accept him. 12 But to all who received him, who believed in his name, he gave power to become children of God, 13 who were born, not of blood or of the will of the flesh or of the will of man, but of God.

14 And the Word became flesh and lived among us, and we have seen his glory, the glory as of a father’s only son, full of grace and truth. 15 (John testified to him and cried out, “This was he of whom I said, ‘He who comes after me ranks ahead of me because he was before me.’”) 16 From his fullness we have all received, grace upon grace. 17 The law indeed was given through Moses; grace and truth came through Jesus Christ. 18 No one has ever seen God. It is God the only Son,[e] who is close to the Father’s heart, who has made him known.

The prologue of John’s gospel is theologically rich.  It offers us a sense of where John will be going in his story of Jesus.  It is fitting that the Gospel of John begins in this fashion, as John’s Gospel tells the story in very different tones and colors from the Synoptics.  This is a theological statement, but that fact shouldn’t keep us from recognizing that John has a story, perhaps even a historical story,[i] to tell us.  But first things first – the one we meet in this Gospel is understood to be Word, Light, and Truth.

“In the Beginning was the Word . . . and the Word was God,” and this Word that was God became flesh and dwelt among us.  That is the assumption that the Gospel begins with.  This idea that the Christ is the Word of God has proven fruitful for theological discourse down through the ages, from Origen to Karl Barth.  Because of this passage John’s Gospel is seen as presenting a very high Christology, one that lifts Jesus up into divinity, something that is much less visible in the Synoptic Gospels.  Thus, it’s not surprising that in our day, in our quests for the historical Jesus that we have a tendency to set John’s story of Jesus to the side.  Even the Lectionary itself simply uses John as filler, basing its three year cycle on the Synoptic Gospels.  But, this prologue is not simply a theological statement; it is also an invitation to see the presence of God in the one John says was Word made flesh.  As Karl Barth has so helpfully reminded us – the Word made flesh is the Revelation of God.   He writes:  “Theology responds to the Word which God has spoken, still speaks, and will speak again in the history of Jesus Christ which fulfills the history of Israel.”[ii]  In these eighteen verses, John pulls back the veil so we can have a glimpse at how God.

The lectionary gives the preacher/congregation the option of beginning the reading at verse 9, wherein the focus is on the “True Light, which enlightens everyone.”  This light, we’re told, is coming into the world.  That there is light coming into the world presupposes that the world itself is living in some form of darkness.  Such is the message we hear in verse 5, where John writes that “the light shines in the darkness, and the darkness did not overcome it.”     Later in the Gospel, in a debate with the religio-political leaders, Jesus boldly proclaims:  “I am the light of the world. Whoever follows me will never walk in darkness but will have the light of life” (John 8:12).

Being that this Second Sunday of Christmas stands on the cusp of the day of Epiphany, a day in which we celebrate the “manifestation of God,” it is appropriate to lift up the idea of enlightenment.  In the story of the Magi, which is found in Matthew’s Gospel and not here, we’re told of a light shining in the darkness that leads Magi from the east to the Jesus.  They come bearing gifts, but also seeking enlightenment (Matthew 2:1-12).  We too come seeking light in our times of darkness, and each of us experiences darkness at different moments of our lives.

To be in the dark is to experience lostness.  When the lights go out and no light enters the place in which we exist – think of a cave – we don’t know where to go (John 12:35).  We can feel our way out, perhaps, but darkness brings with it fear, for we don’t know if we’re going in the right direction or if danger lurks nearby.  The world in which live has its own form of darkness.  Much of this darkness is systemic in nature.  It is the domain of the powers and principalities of this world.  John is concerned about such things.  But there is good news – there is light shining in the darkness.  The pathway is lit.  Our hearts and minds are enlightened.  And when the light is cast upon the land covered in darkness, we see these powers and principalities for what they are, not what they pretend to be.  To find this pathway out of darkness, this pathway that is lit by Christ, requires that we trust our lives to him (John 12:46) – that’s what the word believe means in John.

The word that goes with light in this prologue is the word Truth.  John 1:14 offers us an important summary statement:  “the Word became flesh and lived among us, and we have seen his glory, the glory as of a father’s only son, full of grace and truth. “  The glory of God is light and this light is full of grace and truth.  Pilate asks Jesus – what is truth? (John 18:37-38).  But Jesus simply presents himself as the representation of truth – he is, as John offers us in the prologue, the Word that is present in the Flesh, revealing the Glory that is God, together with God’s grace and truth.  This is the light we seek.

That there is darkness in the world is not a secret.  That Christ is the Light of God who is present in our midst is Good News (Gospel).  For us, in this moment, who entrust our lives to Christ, we receive that light into our lives.  We become light bearers.  We have the opportunity and calling to shine the light of God’s Glory, revealed in Christ, into the darkness that is present in this world, uncovering that which is opposed to the grace and the truth that is God.  May we walk in this light, as we begin a new year as followers of the Word made Flesh, the one close to God's heart, the one who is made known in this one we follow.  Yes, we are called to bear witness to the Light that has come into the world, a light that cannot be overcome by the darkness.


[i] On the question of the nature of this gospel see Richard Horsley and Tom Thatcher, John, Jesus, and the Renewal of Israel,