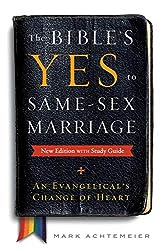 NOTE:  Arriving on my doorstep this morning was a new edition of biblical scholar Mark Achtemeier's engaging and helpful argument that the Bible affirms same-sex marriage. With the Supreme Court decision legalizing same-sex marriage even more churches, mine included, are wrestling with the issue. The new edition doesn't include new text, but provides an extensive study guide for use in groups.  There is a helpful word to leaders that gives guidelines for the study, including the reminder that "any discussion of issues related to sexuality will stir up a range of emotions and opinions in a group. Perhaps this is because our sexual identity is inextricably bound up in our identity as human beings" (p. 135).  I am sharing the review I wrote for the original edition, so that you might consider whether to use the new edition.

While there is still considerable resistance to marriage equality, especially among the religious communities, there is a growing sense within society and even in many parts of the Christian community that the traditional arguments against same-sex marriage are inadequate and should be abandoned.  An increasing number of those who have changed or are changing their minds are, by their own self-definition, evangelicals.  The question that most evangelicals wrestle with concerns the need to reconcile their openness with what they read in the Bible.  Encounters with gay and lesbian Christians may have forced a re-examination of the Bible; even as many did earlier with women’s roles in the church or slavery, but what is it that they find?

All parties agree that there fairly explicitly texts that prohibit at least some kinds of same-gender relationships, but do these texts speak to the modern context?  In addition, must one choose between a stricter interpretation of the Bible and a growing sense that one should embrace one’s LGBT brothers and sisters?

There have been a number of recent books written by evangelicals, including Justin Lee’sTorn and Ken Wilson’s Letter to My Congregation, that have attempted to tell a new story (you may add to that number David Gushee's Changing Our Mind. which aappeared after the review was posted). Following on their heels is Mark Achtemeier’s The Bible’s Yes to Same-Sex Marriage.  Achtemeier is a Presbyterian pastor and theologian.  He is also an evangelical who seeks to hue close to the biblical story.  This book emerged out of Achtemeier’s recognition that his encounters with LGBT Christians raised important questions about how he had read the Bible.  These encounters with gay and lesbian Christians introduced him to who wanted to follow Jesus, but found it increasingly difficult to balance their sexual orientation and their faith in God.   What was supposed to bring joy had become increasingly oppressive; their desire to please God led to nothing but despair.

It has been common in the church to advise gay and lesbian Christians to suppress their sexual desires.  These attempts at remaining faithful, however, “had resulted in alienation from God and loss of faith” (p. 5).  Achtemeier tells the story of one of his seminary students, whose faith blossomed and life experienced spiritual joy once she began to connect with gay Presbyterians.  These connections, which Achtemeier facilitated, led to the discovery that it was possible “that her future might include sharing her life with a partner she loved, in a relationship blessed by God,” her faith in God was strengthened.  Despair was replaced with a passion for God.  Surely this was God’s intent for her life” (p. 5).

Achtemeier focuses on two central questions.  One has to do with the big picture – what is God’s vision for creation?  Whatever a specific biblical text may or may not say when it comes to marriage – whether the couple is gay or straight – one’s interpretation must take into consideration the broader vision of the nature and purpose of God.  This broader picture provides the overall context for reading the biblical text today.    With this vision set out he addresses the second question, which focuses on what he calls the fragment texts.  These are texts that seem to speak to same-gender relationships, but he asks whether they speak to what we know today as a same-gender relationship.

Before embarking on his study of Scripture, he had to determine his method.  As a good Reformed/Presbyterian theologian, method was important.  The first principle focused on offering an interpretation based on “coherent/good sense.”  In his studies of Scripture, he started by asking the question of the purpose of marriage.  What he discovered suggested that the principles could apply to gay couples in the same way as they applied to straight ones.  Setting out a coherent method that drew on reason, he moved the recognition that as a Christian his interpretation should be Christ-centered.  Such a method should seek to interpret Scripture with Scripture – in this way one can keep in touch with the big picture.  Then one must also interpret texts in their historical and biblical contexts.  That is, one must take into consideration the “historical circumstances in which the passage was first written and heard so that we get a good sense of what it would have met to its original hearers.”  The final principle involves understanding the Law Giver’s purpose.  The question here is “why” did a person say what they said.  This became the key to making sense of the biblical passages that seemed to prohibit same sex marriage.  In his reading of such texts, he began to discern that they often addressed situations and issues that on the surface seemed similar, but were not the same in purpose.  That is, they did not address contemporary same-gender relationships.    In this case, what is God’s intent present in these texts?

With these principles in mind, he looked at two kinds of texts – those that addressed marriage and its purpose and texts that have been used to deny LGBT folks a place in the church, its ministry, and marriage.  What he discovered was that what Scripture said about marriage applied equally to gay and straight marriages.  With regard to the latter, they did not seem to apply to the loving, egalitarian relationships existing between two people of the same gender. Instead, they speak of violence, inequality, and idolatry.  In the course of his studies, he discovered that he could accept the original intent of these passages (and what they prohibited), without giving up his new found belief that the Bible permits same-sex marriage.

Many of us have traveled this same path.  Some have simply decided that the Bible, though an important source of religious wisdom, is simply out of date when it comes to social behaviors, and needn’t be consulted on such things.  Others, however, recognize the need to rethink their views, but also feel that they need to retain a strong connection to the biblical text.  Achtemeier counts himself among them.  I think that for many Christians, it is Achtemeier’s journey that will prove the most convincing.  In many ways it is easier to toss the Bible than to engage it in this way, but for many this will be the more fruitful journey.

The book is both a testimony of a personal journey and a theological manifesto. This combination is helpful.  This is not simply an abstract, academic tome.  How we come out on this issue affects the lives – spiritual and physical/emotional lives.  Books like this will prove helpful to many who are still on the journey.  This is important because if the church fails to make sense of this issue it could have a devastating effect on the church.  Our gay and lesbian brothers and sisters are coming out of the closet, both because society is increasingly accepting, but also because it is recognized that the closet is not a healthy place to reside.  I think it is also important that we wrestle with the way in which we interpret the Bible.  For those of us who see the Bible as more than a collection of old religious writings, it is important that we reconcile what we read there with our growing recognition that it is time to change our vision regarding our LGBT brothers and sisters.   Not everyone will agree with the assessments here.

You, the reader, may decide that he needs to go farther in affirming experience over Scripture.  Others, may not feel he has made the case exegetically.  Whatever one's starting point, Achtemeier at the very least gives us another starting place for this important conversation.   Thus, this is a book to be recommended to the church of Jesus Christ!
Email Post
Labels: biblical interpretation Biblical understandings of homosexuality Evangelicalism Gay Marriage Marriage Marriage Equality Reviews