Welcome the Children -- A Sermon for Pentecost 17B 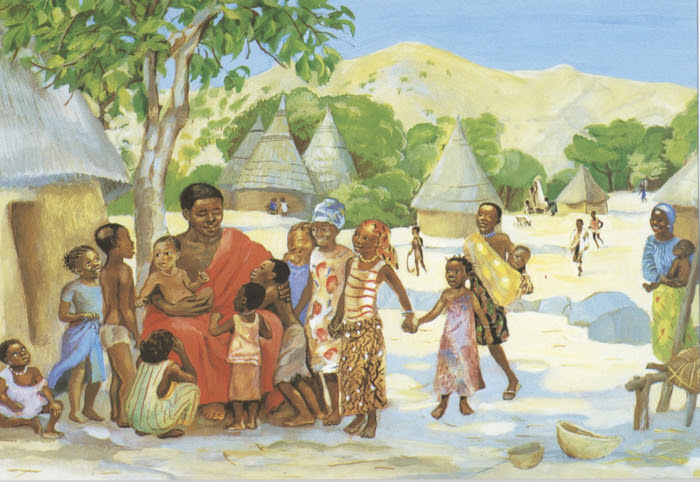 
When Christmas Eve rolls around we celebrate the coming of the Christ child into the world. Some of the carols we sing that night and throughout the season seem a bit sentimental. Consider the opening verse of Away in a Manger:

It’s a comforting picture, but does it reflect Jesus’ own reality?

In the movie Talladega Nights, race driver Ricky Bobby, played by Will Ferrell, declares his devotion to the “Lord baby Jesus.” Yes, he prefers baby Jesus to an adult Jesus, and so he prays that “baby Jesus” would bless his friends and family, and give him success as a race driver. Here’s a taste of his prayer to Baby Jesus:

I doubt any of us pray quite that way, but is it possible that it reflects the way we sometimes envision Jesus?

If Jesus represents God to us, then is it possible that we prefer a God who is cuddly like a little infant? If so, what does that say about our relationship with God? Or put it another way – who’s in charge? Us or God?

As we work our way through this section of the Gospel of Mark we’ve heard Jesus give the call to discipleship, while also revealing that the path he has chosen leads not to glory but the cross. We’ve heard Jesus tell us that to be his disciples can be rather challenging. So, offering prayers to a cuddly Jesus might be a bit out of place! Of course, Jesus’ disciples didn’t quite understand his message. They kept thinking in terms of grandeur not suffering. They preferred Palm Sunday to Good Friday. They even argued among themselves about who was the greatest.

Would it surprise you to learn that similar debates and arguments often erupt in our churches today? Do you ever feel tempted to argue about who is the most spiritual? Are you tempted to show off your bible knowledge? Maybe you’ve heard about Bible Bowl competitions, where teenagers try to out do each other by memorizing the most bible passages. Or maybe you find yourself out in the parking lot congratulating yourself on having the most “Christian” view of politics? Yes, who amongst us is the greatest of them all?

If you need some overt examples of such claims, just watch the current spectacle of the race to the presidency in 2016. Candidates left and right tell us to trust them with the reins of the country, because nobody can do it better!

Then there’s Jesus turning things upside down. He has a different vision of greatness. It involves a cross and not a throne. It involves being a servant. Jesus tells his disciples, who have been arguing about who is the greatest, that if they want be first then they should be last. Consider what James has to say to the church: “Listen my brothers and sisters. Has not God chosen the poor in the world to be rich in faith and to be heirs of the kingdom that he has promised to those who love him” (James 2:5 NRSV).

Jesus illustrates his point by welcoming a child into his circle. If you welcome the child, you welcome Jesus and the one who sent him.

So what should we make of Jesus’ message here? What does he mean by welcoming the child?

Earlier this morning we blessed our children. I think we’re happy to have children in our midst. Like adults, they can argue about who is the greatest. At least, unless things have changed drastically since I was a kid, I expect there is a pecking order on the playground. There’s both an in-crowd and a not-so-in-crowd. Everyone wants to be part of the in-crowd, even if that means being a somewhat invisible hanger-on. Does any of this sound familiar to anyone? It does to me. I learned to play this game early on in life. I learned quickly how to navigate the social order, so that I didn’t find myself in the “wrong crowd.” It’s better to be at the bottom of the in-crowd than at the top of the “out-group.”

I mentioned earlier the political scene where candidates from both major parties are vying for the title of “the most powerful person in the world.” Maybe it takes a big ego and a lot of bravado to be “Commander-in-Chief.” After all, who is going to stand up to Putin?

There is, of course, a person who exhibits a very different sense of power in the world. He’s going to be visiting our country soon, even speaking to a joint session of Congress. That person would be Pope Francis. This Pope seems to have bought into Jesus’ principle that in the kingdom of God the first shall be last. From the very beginning of his pontificate, he has surprised us by his humility. He chose not to live in the Papal apartment, but in a hotel room. On Good Friday he broke tradition and washed the feet of prisoners rather than priests. He is a person of power, but he exercises it very differently from most leaders.  Of course, not everyone is happy with his example!! If you’re the “Bishop of Bling,” a humble Pope is not a good example of the Christian faith!

So what does the path to greatness look like? When Jesus heard his disciples arguing about who was the greatest, he took a child into his arms, and told the disciples that “whoever welcomes this child welcomes me.” Not only that, but if you welcome the child, you welcome the one who sent Jesus into the world.

It is true that even today children are neglected and abused, even in this country, but as a general rule we hold children in greater esteem than was true in the first century. In the first century children were a blessing only if they could contribute to the family income. Since child mortality was incredibly high, families were reticent to get too attached to a child. Sons were valued more than daughters, because they were seen as having greater economic potential. So when Jesus brought this child into the circle he was saying something similar to what we hear elsewhere in the Bible – that when we welcome the least of these, we are welcoming God. So, let us welcome our children, but let us also welcome all those whom the world deems unproductive. As David Gushee, whom we will hear from in just two weeks declares:

He treated all human beings as persons of sacred worth. He sought to meet them at the point of their need and to act to advance their flourishing in whatever dimension was most needed. And he taught those who would be his followers to be “neighbors” to each and every person. [The Sacredness of Human Life, p. 92].

I want to close with the refrain from Brian Wren’s Advent hymn “When God is a Child.” We will be singing a different Advent hymn in just a moment, but I think that this refrain sums up well Jesus’ message to his disciples and to us about when God is a child.

When God is a Child there’s joy in our song.
The last shall be first and the weak shall be strong,
And none shall be afraid. [Chalice Hymnal, 132]