The Pope's Visit and Understanding the Catholic Church 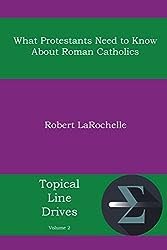 Pope Francis will be visiting our shores this coming week. Some are excited, even Protestants like me. Others are not, including quite a number of conservative Catholics who don't like his economic and ecological statements. Nonetheless, he's on his way, and while here he will speak to a joint session of Congress.

So, what should we expect and how should we interpret what is taking place. Perhaps we need some guidance, especially if we're Protestants. One person who has had considerable experience in both Catholic and Protestant circles is the Rev. Dr. Bob LaRochelle. He was a Catholic deacon and is now an ordained United Church of Christ minister serving a Lutheran congregation. He has written a couple of books on the topic including a brief introduction for Protestants titled: What Protestants Need to Know about Roman Catholics, (Energion, 2013).

I'd like to include a couple of excerpts and invite you to get a copy of your own.

Having said all of this, it is fair to say that to be Roman Catholic, whether one deems oneself a Catholic traditionalist or progressive, involves affirming the importance of the Pope as integral to the life of the church. Reform minded Catholics might yearn for changes in certain policies or insist that the Pope act and deliberate in collegial conjunction with other bishops, yet would nonetheless affirm the ministry of the Bishop of Rome as essential to the Catholic faith.  Protestant Christianity does not share in this affirmation.

Protestant Christians, on the other hand, might admire the work of a particular Pope or might see the value and importance of having an internationally recognized spokesperson for Christianity. Some might even go so far as to yearn for a day when a leader could be accepted by both Catholics and Protestants alike. Yet, in spite of any of that, Protestant Christians would not see the role of the Pope as essential to the structuring and ordering of the visible church of Jesus Christ on earth.


Even if, as a Protestant I do not accord him authority over the whole church, I do admire and respect him (even if I disagree at a number of points). His example of humility is a powerful witness to the grace of the Gospel. His focus on the sacredness of life -- human and non-human (his economic and ecological emphases).  So, again if you want to prep for  his visit, get yourself a copy of this very brief book.
Email Post
Labels: Energion Publications Papal Visit Pope Francis Robert LaRochelle Roman Catholic Church