A Word about Salvation - Lectionary Reflection for Easter 4B 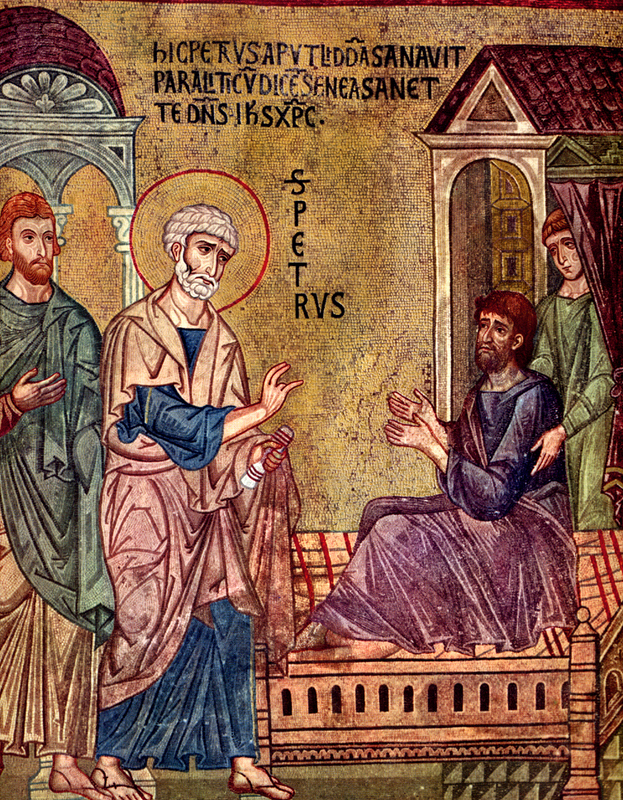 5 The next day their rulers, elders, and scribes assembled in Jerusalem, 6 with Annas the high priest, Caiaphas, John, and Alexander, and all who were of the high-priestly family. 7 When they had made the prisoners stand in their midst, they inquired, “By what power or by what name did you do this?” 8 Then Peter, filled with the Holy Spirit, said to them, “Rulers of the people and elders, 9 if we are questioned today because of a good deed done to someone who was sick and are asked how this man has been healed, 10 let it be known to all of you, and to all the people of Israel, that this man is standing before you in good health by the name of Jesus Christ of Nazareth, whom you crucified, whom God raised from the dead. 11 This Jesus is

‘the stone that was rejected by you, the builders;

12 There is salvation in no one else, for there is no other name under heaven given among mortals by which we must be saved.”

A healing leads to preaching, and preaching leads to arrest, which leads to a trial, and a trial gives an opportunity for preaching. At least that’s the way things seem to work for Peter and John here in chapters three and four of the Book of Acts. Peter had been preaching to a large crowd in Solomon’s Portico, after healing the man who was disabled at the gate to the Temple. In other words, an act of power opens an opportunity to explain the source of power, which of course leads to the message of the cross and the resurrection. While you might think that it would be the cross that stirs the pot here, it is really the message of the resurrection. It appears from the opening verses of chapter four that it was the message of resurrection of the dead that got the attention of the religious leaders, who order them arrested. That is the background story for Peter’s next sermon, this time delivered in front of the religious leaders who have gathered to pronounce judgment on Peter and John.

Unfortunately for the leaders, Peter takes advantage of this appearance to speak once again about the resurrection. Peter begins his defense with an acknowledgment that it seems they had been arrested for doing something good, that is, bringing healing to a man who had suffered for years. The question was—how did they do this? The answer is simple—they acted in the power of the one whom the religious leaders had crucified, but whom God vindicated by raising him from the dead. If you want to know how this happened, well that’s the answer—Jesus! Yes, this Jesus whom God has raised is the source of healing, which means they have been arrested for doing a good deed in the power of the risen one!


This is all boiler-plate apostolic preaching. We hear this message time and again, whether on the lips of Peter or Paul. Central to the message is that of the resurrection, which divides Sadducees and Pharisees. While the two parties aren’t named in this selection, according to Luke, the arresting party included priests and Sadducees. In this scene the Pharisees are absent, so Peter can’t divide and conquer like Paul will do in a later scene. Since the opposition in this scene are Sadducees, for whom the resurrection doesn’t fit into their theology, you can understand their consternation at hearing Peter preach about the resurrection in their presence. For Peter and the early church, as was true of the Pharisees, the resurrection was the key to their theology. It was the revelation of God’s power present in Jesus. Since this is the Easter season, this passage offers the preacher and the church an opportunity to again reflect upon and celebrate the Resurrection.

Where this passage becomes controversial in modern contexts, is the wording of verse 12. This verse is often used as a proof text to defend the premise that one cannot be saved without confessing faith in Jesus, for “there is no other name under heaven given among mortals by which we must be saved.”  In other words, it is a foundational text for an exclusivist vision of salvation. A question that might be asked of Peter concerns what he means by salvation and how Jesus is the name by which one is saved. Is Peter setting up a point of division? Is this a red line, at which Peter is asking his accusers (and anyone else) to dare to cross? That is, one’s eternal destiny hangs on how one responds to the message of Jesus. That is how it has often been read, but is this how Peter means it to be heard? Is it how Jesus would have us hear it? Or, could we read it in a more inclusive way?

We might want to start by remembering Peter’s audience, which is comprised of fellow Jews. It’s important that we remember that Peter was a Jew before he met Jesus, and that he remained a Jew after he met Jesus, and he remained a Jew even as he stands before the Sanhedrin, accusing them of their complicity in the death of the one by whom he has engaged in healing ministry. So, once again this is an intra-family debate, with Peter inviting the religious leaders to affirm God’s work in and through Jesus. Yes, they had participated in his death, but God overturned that deed in the resurrection. Of course, the court here is composed of a group of leaders who deny the resurrection of the dead, and so they would be reticent to accept Peter’s message of vindication. In their minds, Jesus is dead and remains dead, and therefore is unavailable to empower Peter and John. Nonetheless, this is Peter’s testimony, and apparently some 5000 people had stepped forward to follow Jesus through his ministry. In other words, Peter and his partner John were stirring the religious pot, undermining the authority of the religious leaders, who were charged with keeping order by the Roman occupiers. Nonetheless, Peter remains firm: “the stone that was rejected by you, the builders; it has become the cornerstone.” There is salvation in no other name.

When we hear the word salvation (Greek: soteria), it is good to remember that this word has a variety of nuances and meanings. Context is important if we’re going to understand its meaning. When it comes to Acts 4:12, almost all translations offer up “salvation.” However, we could translate this word as healing, which makes sense in this context. After all, they are under arrest, at least in their own minds, for healing someone in the name of Jesus. There are other ways of rendering the word, including rescue and spiritual wholeness. In other words, Peter might have something in mind other than getting to heaven. In fact, there is nothing in this passage that hints at salvation being the means of gaining heaven. So, he might be speaking in very terrestrial terms.

I find wisdom in the reading of the passage by Fred Craddock and Eugene Boring, who point out that “Luke is not here addressing the theoretical issue of the eternal destiny of people in distant centuries and countries who have not heard the Christian message.” In context, he is expressing his belief that the God of Israel has acted in Jesus, who was crucified, but was raised by God, and it is in Jesus that the power of God is being revealed in the healing of this man who had been disabled, but who is now running around proclaiming his healing. Craddock and Boring also remind us that Luke’s theology of salvation is not reflected either in the view that “the Christian way is only one of ‘many roads to God,’” nor are we being “encouraged to believe that only confessing Christians are finally accepted by God.”  As we ponder this passage, we would be wise to heed our commentators and affirm that “on the basis of this text, Christians ought to say neither than only Christians shall ultimately be saved nor that people can be saved through a variety of saviors. Christians should confess their faith that the God revealed in Christ is the only Savior, without claiming that only those who respond in faith will be saved” [The People’s New Testament Commentary, p. 378].

As we continue the Easter journey, may we ponder together the power of Jesus name, by which God brings healing and salvation. For Peter, the risen Jesus was the only means by which the God of Israel acted to bring healing, wholeness, and salvation. In him God’s power was let loose.Peter invites us to embrace the Risen One, as we walk in God's wholeness.