Love in Deed, Not Word - Thoughts on the 2nd Reading - Easter 4B 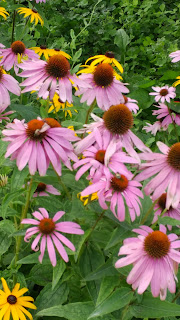 16 We know love by this, that he laid down his life for us—and we ought to lay down our lives for one another. 17 How does God’s love abide in anyone who has the world’s goods and sees a brother or sister in need and yet refuses help?

18 Little children, let us love, not in word or speech, but in truth and action. 19 And by this we will know that we are from the truth and will reassure our hearts before him 20 whenever our hearts condemn us; for God is greater than our hearts, and he knows everything. 21 Beloved, if our hearts do not condemn us, we have boldness before God; 22 and we receive from him whatever we ask, because we obey his commandments and do what pleases him.

23 And this is his commandment, that we should believe in the name of his Son Jesus Christ and love one another, just as he has commanded us. 24 All who obey his commandments abide in him, and he abides in them. And by this we know that he abides in us, by the Spirit that he has given us.

Note: I was not in the pulpit, but since the Second Reading from the lectionary draws from 1 John, a book that I've been preaching from, I share these reflections taken from a Bible study that I am developing that will hopefully be published in the near future.

Having asked how one could say one loved, while refusing one’s brother or sister in need, John reinforces his message by telling the community: “let us love, not in word or speech, but in truth and action” (vs. 18). What is stated in verse 18, restates what had already been stated in verse 17. How can you say you love God and not help a brother or sister in need? Thus, love is a verb. It requires action, which will lead to reassured hearts.

Since John is attempting to address challenges posed by the secessionists, this emphasis on action is set in opposition to the view that because of faith in Christ, deeds are unnecessary. The issue, as Raymond Brown notes, isn’t hypocrisy, but that the secessionists “taught that actions or deeds were not salvifically important since one already possessed eternal life though faith in Christ.”3 In this we see a strong resemblance between John’s message and that of James, who declared that “faith by itself, if it has no works, is dead” (James 2:14-17). As we have seen, John does have a place for grace— “if anyone sins, we have an advocate with the Father, Jesus Christ the Righteous” (1 Jn. 2:1-2). Grace, however, does not let one off the hook. Love, like faith, requires action.
It is action that provides reassurance that one is from the truth. Action is related to conscience. But if our hearts do condemn us, God is greater still, and thus there is hope. As Eugene Peterson puts it in his translation: “For God is greater than our worried hearts and knows more about us than we do ourselves. (vs. 20). Therefore, if once our hearts are no longer condemning us, then we will have boldness before God. There remains the commitment to the perfection of faith as a goal. The secessionists, however, emphasizing faith over deeds, may have offered an attractive pathway. Raymond Brown offers this interpretation: “One is begotten by God through faith in Jesus, and deeds cannot change that. But the author refuses to concede that the need of showing the truth of love in deeds must lead to a lack of confidence about one’s status before God.”4 Concern for action does not negate God’s forgiveness or acceptance.  That might be the point. They couldn’t be bold in their proclamation of the Gospel, because they lacked the confidence rooted in the love of God.
The question of boldness before God climaxes in verse 22, with the promise that “We receive whatever we ask from him because we keep his commandments and do what pleases him” (CEB). The idea here is that a covenantal relationship with God involves keeping God’s commandments. By being in tune with God’s will, one likely will have one’s prayers answered. It is, therefore, a reciprocal relationship that is evidenced by one’s actions.
In the concluding two verses of chapter 3, we find a summation of the previous point concerning the commandments of God. In verse 23, John writes that the commandment is this: “that we should believe in the name of his Son Jesus Christ and love one another.” The commandment concerns believing in Jesus and loving each other. This word “believe” has become problematic in recent years, in large part due to theological reductionism that reduced belief to affirming doctrinal statements. If you believe it, you will be saved. But that sounds more like the secessionists than John. So, believing is more than agreeing to doctrinal statements. More likely it involves embracing God. Note that John uses the singular—commandment—so that to believe involves loving one another. This word stands close to the Synoptic tradition of the two commandments—love God and love one’s neighbor (Mk. 12:28-31).
As the chapter closes, we encounter the common Johannine word abide.  Those who obey God’s commands abide in God and God abides in them. It is not a matter of meriting God’s favor. It is simply a matter of a covenant relationship. To abide is to obey, and when one abides in God, God abides in them. We know that God abides in us through the presence of the Spirit within us. As Raymond Brown puts it: “The same God who gave the commandment (3:23c) gave the Spirit that enables us to live out the commandment.”5


The reference here to the Spirit, at the end of chapter 3, connects what has gone before with what is to come. In 1 John 4:1-6 speaks of testing the spirits. Even as there is the Holy Spirit, there are other spirits who are not of God. By obeying God’s commandments, one gives evidence that God’s Spirit is present. This vision of the Spirit fits well with Gospel of John’s vision of the Spirit as the Paraclete, the Comforter/Counselor/Advocate, who bears witness to God’s truth.