Christ Our Advocate - A Sermon for Easter 2B 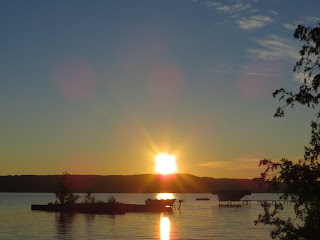 
“Christ the Lord is Risen Today. Alleluia” This morning that declaration continues to ring out as we hear the invitation to walk in the light of God. As the author of 1 John points out, we meet the God who “is light and in him there is no darkness at all” in the person of the risen Christ.

Here is the message of Easter: The risen Christ shines the light of God into the darkness of this world, with that light comes a new age of the Spirit. The old age, which is marked by sin and death has lost its grip on power. It’s still with us. We see it all around us, but a new age is breaking into our world, and Jesus invites us to carry this light of God into a world where the agents of the old age are resisting the light.

When I read a passage like this, I can’t help but think of Star Wars. By now many of you know I am a Star Wars fan, and that any time Scripture speaks in terms of light and darkness, I have to dwell for a moment in that world. In the Star Wars movies and books we learn that the power of the dark side of the force is powerful. Because it’s powerful, it’s attractive. It offers us a sense of order, but it also brings bondage. The world in which this letter appeared had some similarities to the world of  Star Wars. Rome promised peace, stability, and order, but all of this came  at a cost.

Jesus was a victim of Rome’s form of order. He didn’t fit into the system that was marked by darkness. Darkness tried to snuff out the light that Jesus brought into the world, but then came the light of the Resurrection, which broke the bonds of darkness.

In the Star Wars world, the power of darkness feeds off of fear, anxiety, anger, and resentment. We see that power at work in our own world. We see movements of hate and violence emerging that feed off of fear, anger, and resentment. To put this in John’s terms, these are marks of the old age of sin. But John offers us a different word. You could call it The New Hope. In Jesus’ resurrection the light of God has broken through the darkness. If we walk in the light, John tells us, we will have fellowship with one another through the blood of Jesus, who cleanses us from our sins.

The word “sin” appears with some frequency in 1 John. We will meet up with it again next Sunday. John is a realist. He proclaims a message of freedom from sin, but he also recognizes that the power of darkness doesn’t want to let go of our lives. We still find ourselves caught in a web of anger, pride, and self-deception. These hinder our ability to walk in the light.  There is, of course, good news here. Even when we find ourselves walking in darkness, there is a way forward. If we sin by giving into the power of darkness, we have an advocate who with the Father, who is the means of our forgiveness, and not for ours only, but for the sins of the entire world.

Before we get to Jesus’ role as advocate, we first hear the word about God being the light that shines into darkness. It’s a truism that a lot of crime takes place at night under the cover of darkness. We also know that light deters crime, which is why street lights are important to communities. In a world marked by the deeds of darkness, the light of God shines forth, illuminating the streets. When the light of God shines into our world, we begin to see those areas that are ruled by darkness. We begin to see the presence of anger and fear and prejudice. When these marks of darkness are identified by God’s light, it’s possible to begin taking steps to remove these marks from our lives and from our communities.

Jesus shines God’s light into each of our lives. When that light shines, we begin to see the signs of darkness present in our lives. One area of darkness that has been revealed in my life is my privilege as a white male. There is nothing wrong with being of European descent or being male. That is who I am. I can’t do anything about it. I am who I am. But, our culture has given me certain benefits that I didn’t earn. So, when the light began to shine on that area of my life, I began letting go, often reluctantly, that privilege so that others might find their rightful place in the community. This is an ongoing work of grace!

This past week we remembered the assassination of Martin Luther King, who died trying to bring a message of light to our culture. The country officially honors his memory and legacy, but the reason why there is a #BlackLivesMatters movement is that the realm of darkness continues to push back against the light. Dr. King spoke of a dream on the Mall in Washington, D.C., but as he later confessed, that dream became a nightmare. So, the work goes on. As John reminds us, “if we say we have no sin, we deceive ourselves, and the truth is not in us.” The starting point for being liberated from the bonds of darkness, is confessing that we have a problem.  The problem involves not fully walking in the light. But, there is hope. Jesus is our advocate. He is the one who provides a way out of darkness and into the realm of light.

Jesus is our advocate, but that doesn’t get us off the hook. John believes that our behavior is a good marker of whether we are walking in the light. There is a sentiment in the Christian world that is attractive but sends the wrong message. You may have seen a poster or a bumper sticker with the words:  “Christians aren’t perfect, just forgiven.” There is truth in this statement, but it seems to give license to bad behavior. Think about the message you send if you put that bumper sticker on your car and then cut someone off, almost causing an accident, and then continuing on your way with no thought for the person you almost injured. What witness did you share?

In John’s mind, Christians might not be perfect, and they might be forgiven, but that’s no excuse for bad behavior! Nevertheless, when darkness takes hold, and we find ourselves entangled by sin, Jesus is there as our advocate with the Father. Jesus serves as the “atoning sacrifice for our sins, and not for ours only but also for the sins of the whole world.”

As we come to the final verses of our passage, I want to focus our attention on two words. First, there is the word translated here as advocate.  The Greek word is parakletōs. That is the same word used in the Gospel of John to speak of the Holy Spirit (John 14-15). Christ is our advocate, helper, defender, and intercessor. He is there for us and for our world when we fall short of God’s desires for our lives and world.

The other word is translated here as “atoning sacrifice.” It’s important that we note that John doesn’t offer us a theory of the atonement in this letter. He doesn’t say that Jesus served as our substitute, taking on himself the punishment we deserve. It would be better if we would read this in light of the Jewish tradition, that those who remain faithful to God, even in the faces of death, are given the power of intercession. It is Jesus’ faithfulness even in death that allows him to intercede on our behalf, inviting God’s forgiveness to be extended to the entire world. So, we might want to translate this verse not as “he is the atoning sacrifice for our sins.” Instead, we might want to follow the lead of Judith Lieu, and translate this verse as “He indeed is forgiveness for our sins, and not only for ours but also for the whole world” [I, II, & III John: A Commentary, Kindle loc. 1112-1113]. Therefore, because of that faithfulness, that righteousness, the sins of the world are washed away. Light has gained victory over the darkness through the resurrection.

Yes, the darkness continues to resist by trying to snuff out the light, but the light has proven to be too strong. In the resurrection, the light of God broke forth, making available God’s universal grace to the world.