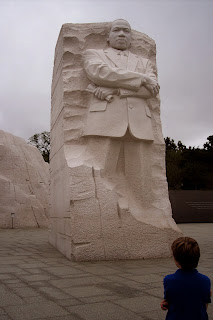 Well, I don’t know what will happen now. We’ve got some difficult days ahead. But it doesn’t matter with me now. Because I’ve been to the mountaintop. And I don’t mind. Like anybody, I would like to live a long life. Longevity has its place. But I’m not concerned about that now. I just want to do God’s will. And He’s allowed me to go up to the mountain. And I’ve looked over. And I’ve seen the promised land. I may not get there with you. But I want you to know tonight, that we, as a people, will get to the promised land. And I’m happy, tonight. I’m not worried about anything. I’m not fearing any man. Mine eyes have seen the glory of the coming of the Lord.  [King Jr, Martin Luther. The Essential MartinLuther King, Jr.: "I Have a Dream" and Other Great Writings (KingLegacy) (Kindle Locations 2952-2957). Beacon Press. Kindle Edition.]

Today, we stop to remember the fiftieth anniversary of the assassination of the Rev. Dr. Martin Luther King, Jr. in Memphis Tennessee. The words above brought to a close Dr. King’s final message, delivered at Mason Temple, the headquarters of the Church of God in Christ. Dr. King was in Memphis to lead a march in support of sanitation workers, most of whom were black, who had gone out on strike. He gathered at the church with supporters as King sought to expand the Civil Rights Movement to include economic justice. Known as the Poor Peoples’ Campaign, this event in Memphis was intended to lead into larger programs. As the words of the sermon disclose, Dr. King may have had a sense that he would not live to see this program come to fruition.

So, we come to April 4th, the day on which Dr. King was struck down by an assassin’s bullet as he left his hotel room to go to the march. Today a new Poor Peoples’ Campaign is underway. It too is being led by religious leaders, including Rev. William Barber. I was only ten years old, living in far away Southern Oregon. I would have been at school, just a fourth grader, when Dr. King fell. His death had no immediate impact on my life. In time, however, I was introduced to his movement and legacy. We live at a time that has some similarities to 1968. We have been at war for some time. People of color still struggle to find an equal place in society. Workers are falling behind.

On the sermon preached the night before, Dr. King invited the congregation to rise with him and make a difference. We have heard the President speak of “making America great again,” though his rhetoric is not inclusive. He seems to speak for white Americans who feel besieged by the growing ethnic, linguistic, and religious pluralism of the nation. Dr. King also spoke not of making the nation great again (for African Americans in 1968, making America great again was not a promising program), but rather he called for making America a better nation.

Let us rise up tonight with a greater readiness. Let us stand with a greater determination. And let us move on in these powerful days, these days of challenge to make America what it ought to be. We have an opportunity to make America a better nation. [King Jr, Martin Luther. The Essential Martin Luther King, Jr.: "I Have a Dream" and Other GreatWritings (King Legacy) (Kindle Locations 2920-2922). Beacon Press. Kindle Edition.]

May we honor the memory of Martin Luther King on the fiftieth anniversary of his assassination by committing ourselves not to making America great again, but to make this a better nation. That is, may we enter the Promised Land that he beheld on the night before his death at the age of thirty-nine in Memphis, Tennessee.