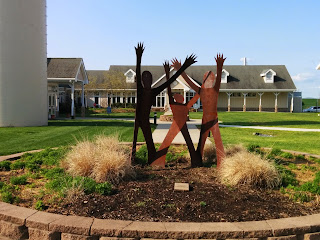 
Who am I? What is my identity? We’ve all asked these kinds of questions of ourselves. In that spirit, let me introduce myself to you, as I know myself relationally. I am Bob, the son of Robert and Beverly, brother of Jim, husband of Cheryl, and father of Brett. If that doesn’t tell you enough about who I am, I could add that I am pastor of Central Woodward Christian Church in Troy, Michigan. If you need more, I can show you my resume, which gives details about my occupational and educational background, along with a lot of other details.

Our reading this morning from 1 John adds another important element to my identity. In fact, it might be the most important factor of all, because it applies to all of us gathered here this morning. John invites us to “see what love the Father has given us, that we should be called children of God.”

Biblical scholar Klyne Snodgrass lists nine factors that shape our identities, which range from our relationships to our commitments, from our histories to our bodies. In this regard, each of us is different. We have different bodies, relationships, and histories. There is a growing interest in our culture to know where we come from, so we trace our genealogies and even have our DNA tested. I haven’t had my DNA tested, but my mother has. Her test reveals certain things about who I am, at least from her side of the family. One thing is certain, like most people who have ancestors from the British Isles, I have some Viking blood in me! You may as well!

While all of this is interesting, Snodgrass echoes the message of 1 John: We are who God says we are. We may not have fully lived into that identity, but God has declared that we are children of God. That means we as a congregation are family, according to our spiritual DNA, if not our biological DNA.

So, what does it mean to be a child of God? The answer is found in our relationship with God. While we’re not a creedal people, the Nicene Creed may offer a clue. It declares:

“We believe in one Lord, Jesus Christ, the only Son of God, eternally begotten of the Father, God from God, Light from Light, true God from true God, begotten not made, of one Being with the Father; through whom all things were made.”

Although John doesn’t use the word adoption, Paul does. In writing to the Church in Rome, Paul tells his readers:

For you did not receive a spirit of slavery to fall back into fear, but you have received a spirit of adoption. When we cry, “Abba! Father! it is that very Spirit bearing witness with our spirit that we are children of God, and if children, then heirs, heirs of God and joint heirs with Christ—if, in fact, we suffer with him so that we may also be glorified with him (Rom. 8:15-17).

So, what does it mean to be adopted into the family of God? Kelley Nikondeha, who is herself adopted, reminds us that modern understandings of adoption differ from those of the first century Roman world. In that time, adoption was functional. Emperors and other people of means used adoption to secure their “succession, legacy, and inheritance.” In the Roman world, adoption wasn’t about rescuing orphans, though Christians were known to that [Adoption, p. 23]. So, if we are children of God, that means we have been given certain responsibilities as heirs of God’s promises. Through our adoption as children of God, we have been raised to a different status.

While we might want to know what this might look like, John cautions us to be patient. What we will be hasn’t been fully revealed and won’t be until we see him as he truly is. In the meantime, John wants us to know that if we are in Christ, we are children of God, and that we should behave accordingly.

Although we often call this a letter, it is really more of a manifesto. John uses this manifesto to express his concerns about the community he has responsibility for. He wants to address the “the problem of sin” that had infected the congregation. You may have already noticed that John talks a lot about sin, which can make people uncomfortable. Maybe that’s because we’ve been confronted by a fire and brimstone preacher, who gets a thrill from telling people they’re going to hell if they don’t repent. So, just in case you’re wondering, I’m not going to preach that sermon this morning. Nevertheless, John has identified a problem that infects his and other congregations.

In this particular passage John speaks of sin in terms of “lawlessness.” He wrote to a community experiencing brokenness, because certain people in the community were exhibiting lawlessness. The Message offers some insight into John’s concerns, when Eugene Peterson translates verse four: “All who indulge in a sinful life are dangerously lawless, for sin is a major disruption of God’s order.” This word about God’s order takes us back to the opening lines of Genesis 1, where God creates the universe by bringing order out of chaos. According to John, sin reverses God’s purpose, by introducing disorder into the world. Sin is, therefore, “a major disruption of God’s order,” and John is concerned about a group of people who he believes are disrupting God’s order in the congregation.

Although you might think I’m stretching the analogy a bit, I think the final episode of Seinfeld illustrates this idea of lawlessness. In case you don’t remember the episode or you never watched Seinfeld, here’s the plot line. The ever self-involved, perhaps, self-deceived, foursome of Jerry, Elaine, George, and Kramer go on vacation and end up in a town that has a law on the books that makes everyone responsible for the welfare of everyone else in the community. Our foursome end up on trial for the crime of “depraved indifference,” after they’re observed watching with apparent amusement as an obese man is being robbed. They don’t step in and help the man, they just stand there, laughing, cracking jokes, and taking pictures. They don’t get involved, because that’s who they are. As the trial unfolds, we watch witness after witness, all of whom are the wonderful characters who inhabited the show, share how these four people lived with total indifference to the needs and feelings of others. They were, to put it delicately, lawless.

I remember watching that episode and acknowledging the ways in which these four people exemplified “depraved indifference.” I must confess that I could see myself in them. These are not, however, the actions of God’s children. If we act lawlessly, we’re acting contrary to our standing as adopted children of God. John wants us to embrace our adoptive status and act accordingly.

I like this word from Ronald Cole-Turner, who writes:

Our birth certificate states our natural identity. Our baptism certificate declares our true identity. By God’s love, we are no longer strangers, orphans, lost in the cosmos, without hope or direction, except for our own imagination and self rescue. We are loved, claimed, and redefined, as nothing less than God’s child. [Feasting on the Word, p. 420].

This status comes to us as fruit of the Resurrection.

Who are we? John answers that question by declaring us to be children of God. This is who God says we are! If we are children of God, then, as Klyne Snodgrass points out, we must reject that side of our selves that “does not fit with the character of God.” This doesn’t mean we are rejecting our identity, but it is a “rejection of self-centeredness and the rejection of an inadequate and misguided self” so that we can become the person who has been created by God in God’s image. [Snodgrass, Who God Says You Are, p. 227]. May we embrace God’s declaration, and live together as children of God. In other words, let us embrace the family of God!