Abundant Mercy - A Sermon for Pentecost 11B (Psalm 51) 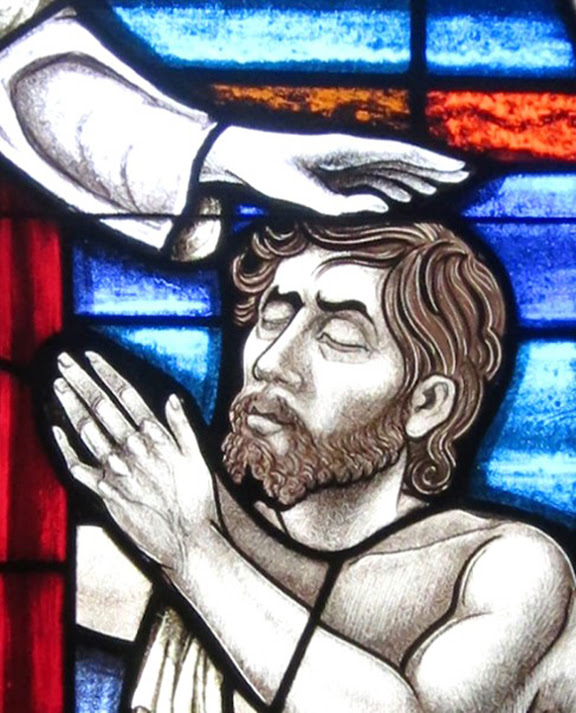 
There’s a fairly well known biblical story that features King David, Bathsheba, Uriah, and Nathan the Prophet. The story, which is found in 2 Samuel, begins with David spying on the wife of Uriah, one of his military officers, who is away at the front. When David sees her bathing, he grows covetous. He likes what he sees, and as King he believes he can have whatever he pleases. So he sends for Bathsheba, sexually assaults her, and sends her home. He believes he can do this without consequence because he has no equals, or so he believes. Before too long word comes to David that Bathsheba is pregnant. Since Uriah is away at the front, David knows that questions will be raised as to the father. He’s afraid that fingers will point his way. So, he calls Uriah home, hoping Uriah will share his wife’s bed. Then, when the child is born, no one will be the wiser. Unfortunately for David, Uriah is an honorable man, who refuses to take advantage of the comforts of home when his fellow soldiers face the discomforts of the front. Since Uriah won’t share his wife’s bed, David’s coverup is foiled. But David is clever. He conspires with his commanding general to put Uriah in a position where he is sure to die in battle, and the plan unfolds as David hoped. With Uriah out of the way, David is free to add Bathsheba to his collection of wives.

Although David’s sins are great, he found a way to cover his tracks with the help of friendly enablers. Besides, when you’re the king, you’re the law—so who is going to indict you? Even though he broke three of the ten commandments— coveting, adultery, and murder—he believed he was in the clear. Unfortunately for David, God saw his actions and was displeased with him. So, God sent Nathan the prophet to confront David.

When Nathan approached David, he told a parable about a rich man who hosts a visitor. As a good host, he needs to provide a meal. But, instead of taking a lamb from his own flock, which is quite large, he takes the beloved lamb of his much poorer neighbor, and serves this lamb, which  his neighbor treasured like a daughter, as a meal for a stranger. When David heard this story, he got all riled up and called for the rich man’s head. How could he do such a thing? It is a good question. Now, having set the trap, Nathan hits him with the punch line: “You are the man.”

David did everything possible to cover up his crimes, but he couldn’t escape God’s sight. When David set up his scheme, he forgot that God is all-seeing. Nathan reminded David that while he was the king, he wasn’t God. So, David made his confession: “I have sinned.” He repented, hoping that God’s mercy would cover him. He does receive mercy, but there were consequences. Nathan told him that the child would die and there would be disruptions in his family life. In other words, even when we receive mercy, we may still endure the consequences of our actions, which often affect others as much as they affect us.  (2 Sam. 11-12).

This famous story of David’s sin, its discovery, and his repentance, stands behind Psalm 51. Although David probably didn’t write it, the Psalm’s subheading links it to the story in 2 Samuel. The Psalm reflects the depths of David’s sorrow, and his desire to experience God’s love and mercy. As we hear this Psalm, in light of the story of David and his sin, what words do you hear that speaks to your life?

As we consider that question, I should note that this is a penitential psalm, which means it’s the prayer of an offender who pleads for God’s mercy. Victims, on the other hand, offer up laments, which often include prayers for vindication and even God’s vengeance. Both kinds of prayers appear in the Psalms, but this is the prayer of the offender.

If truth be told, we all know our transgressions. Every one of us carries at least some baggage. I know I do. I may not want to reveal it in public, but I have my share of dirty laundry. I’m not alone. This Psalm, which we often read on Ash Wednesday, gives us the words to address this baggage that weighs us down. It speaks of forgiveness and mercy. When we know we are dirty, we want to be made clean, and that’s what a penitential psalm is for.

The Psalmist lifts up this prayer is because he trusts that God’s steadfast love and abundant mercy are sufficient to blot out any and all transgressions. Elizabeth Webb suggests that “sin, in the psalmist’s understanding, is a deep-seated stain on the soul, which only God can make clean” [Preach this Week, Mar. 22, 2015].  Yes, only God, in God’s mercy, can wash away the stain that lies upon the soul. With that knowledge, the Psalmist offers up this plaintive prayer:

Create in me a clean heart, O God,
and put a new and right spirit within me.

When we come before God in repentance, we are hoping God will wash us clean, creating within us a clean heart. We also hope that God will put within us a new and right spirit.

Here’s the thing. When we are in the wrong, when we have sinned, we hope God will be merciful. We hope that God will not shut us out, casting us away from God’s presence. We hope God won’t take from us the holy spirit. We want to experience the joy of God’s salvation. That’s why we pray a penitential psalm!

But what if you’re the victim? That’s where the laments come in. These are the Psalms that cry out to God, asking God to take vengeance on the offender. When you’re the victim, you probably would like to see justice done, rather than see the offender experience steadfast love and abundant mercy. Many of us may have found ourselves in the position of victim as well as offender. So, whatever word we hear from Psalm 51 needs to be heard in partnership with the psalms of lament.

I decided to look back through my sermons to see where and when I last preached on this passage. It was Ash Wednesday in 2010. That was before the birth of the #MeToo movement. Over the past year or so, we have seen numerous famous men get outed for sexual harassment and sexual assault. One of the questions raised in the midst of this series of revelations has to do with consequences, and whether or when someone can be restored. People have asked: is an apology sufficient? The answer is often no. The stain must remain. Mercy is not going to be made available.

Do you see some similarities between David’s offenses and those described by the #MeToo movement? It might help to use the word sexual assault when we speak of David’s “relationship” with Bathsheba. Unless we speak in these terms, Bathsheba comes off as a seductress and we let David off the hook. He would have escaped notice, had God not blown the whistle on him. But, when he was outed, David confessed his sin. He asked for forgiveness. He wanted to draw on God’s abundant mercy. I expect that at least some of the men who have been outed want to start over with a clean slate. They have made their penance and want mercy. So do we.

Mercy, of course, isn’t the same thing as leniency. David suffered the consequences, and so do we. But the promise of mercy is one of clean hearts and new spirits. It’s a promise of a new beginning, where the stain upon our souls is washed away. When we experience the joy of God’s salvation, which includes a new start in life, we can cry out to God: “O Lord, open my lips, and my mouth will declare your praise.”

Yes, “Praise God from whom all blessings flow!”